Legacy of the last great epidemic

The drama and trauma of polio lingers 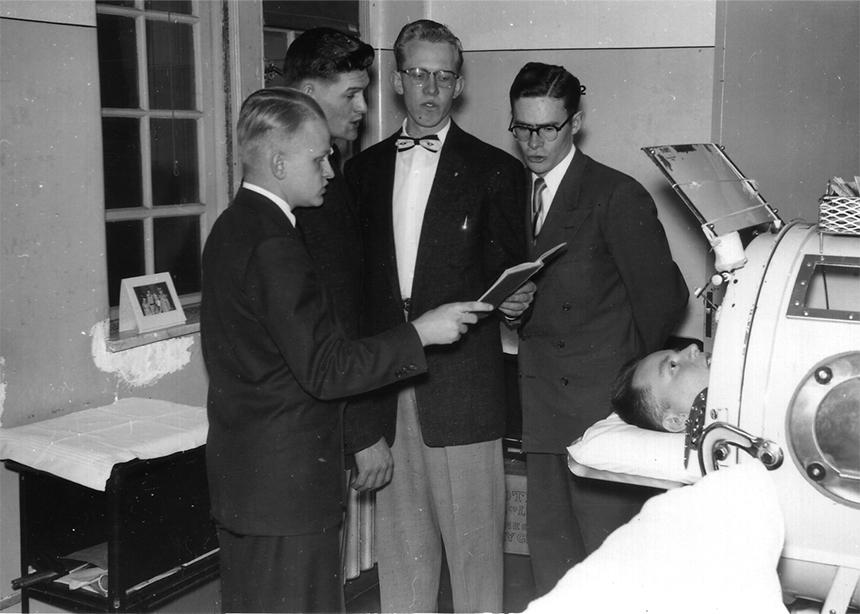 Dave Penner recalls playing in the ditch with his brother in the summer of 1952. He was 5, his brother Henry was three years older. The freshly dug ditch on the expanded Highway 3 next to their yard near Morden, Man., had filled after a rain storm and Dave remembers having a grand time in the water with his brother.

The boys went in for a nap, and when Dave woke up from his nap he jumped out of bed and fell on his face. His muscles didn’t work. He clearly recalls trying again. Same result.

He and Henry were taken to hospital with polio.

Polio, which paralyzes muscles, sometimes permanently, was arguably the most significant epidemic in Canada between the Spanish Flu of 1918 and COVID-19 today. It came in sporadic waves, with a peak in 1952 and 1953. In Canada, 9,000 cases and 500 deaths occurred in 1953. Winnipeg had more reported cases that year than any other major North American city. In 1955, a long-awaited vaccine was introduced.

Polio attacked Henry’s muscles required to breathe. He died not long after being admitted to hospital.

Dave’s right side was paralyzed. He regained use of his leg, but not his arm, although he continues to lead an active life.

Dave suspects that waste from the highway construction crews was washed into the ditch by the rain storm, resulting in transmission of the virus to him and his brother. Although scientists did not know it at the time, polio was spread via feces, often in the form of contaminated water.

Carl Braun recalls Henry’s funeral. He had been Henry’s teacher the year before at the one-room Zion School, and had the grim task of preparing the school kids to sing at the funeral. For Carl (my uncle), the day was doubly tragic.

On the way to the funeral, the young teacher had taken his older brother, Ted, 24, to the clinic. Ted had not been feeling well for some time, although doctors had not given a diagnosis. After the funeral, Carl went back to the clinic, where Ted lay in pain on a bench in the waiting room. They went home to the farm, 10 kilometres away.

But Ted was still in distress. Two days later, he was in hospital, with no question about his diagnosis now. After he struggled to breathe all night, the family procured an electrician’s van that was quickly emptied to make room for a cot for the hour-and-a-half ride to Winnipeg.

My dad, the youngest brother of Carl and Ted, recalls his dad saying that the truck would drive down Highway 3 near the farm and the kids could go to the highway to see their brother on the way to the hospital. My dad, 11 at the time, understood that might be the last time he would see his much-admired brother.

My Aunt Adeline recalls peeking into the truck, then going back home and crying on the couch, then realizing life needed to go on. It was summer on the farm. Their mother had died 11 years prior, one brother was out of commission, and their dad and older siblings would be spending time visiting Ted. Sadness and worry would mix with work.

As my late Uncle Ed recalled, the initial trip to Winnipeg was agonizing, as Ted was gasping for air. When Ted said he couldn’t take it anymore, they stopped at a farm yard to call an ambulance, which took Ted the rest of the way. As Ed recalled in a family book about Ted, the trip was for Ted, “a struggle to survive,” and for Ed, “a nightmare never forgotten.”

By the end of the day, Ted was in an iron lung at the King George Hospital in Winnipeg. Iron lungs were metal tubes with a mechanical bellow at the foot end that alternately pressurized and depressurized the chamber which essentially inflated and deflated the patient’s lungs. Only the patient’s head stuck out of the tube, which sealed around their neck.

Ted spent several years in an iron lung, before a tracheotomy, respirator and rocking bed replaced it. He remained at the King George Hospital until his death in 1988. He could speak, eat, and wiggle his toes and fingers slightly. He read extensively, using a wand with a grippy end to turn pages of books or magazines positioned in a special rack.

Of the 12 Braun siblings, three ended up contracting polio, as well as one niece, although Ted was the only one with permanent damage.

But for all, the disease left a practical and emotional legacy. For those uncles and aunts I interviewed, the agonizing events of 1952 are still somewhat raw, mixed with the sadness of seeing their brother spend most of his life on his back. Practically, for the 36 years of Ted’s hospitalization, family members, along with Katie Dyck, the woman Ted would have married, visited him faithfully. They speak about how he never complained, or almost never, depending on whose version of the story I hear.

For much of my childhood and youth, our family drove to Winnipeg one Sunday a month to visit Uncle Ted. I saw iron lungs in the hall, although I did not see him in one. My sister and I would exchange greetings with our gentle, pleasant uncle, perhaps get a “ride” on the bed that rocked back and forth to aid his breathing, then listen to our dad and uncle discuss politics or farming.

Uncle Ted graciously accepted his disability. When he died of multiple medical complications at age 60, a poem found in his wallet read, in part: “One day at a time, and the day is his day. . . . His grace is sufficient; we walk not alone.”

Canadian Mennonite is an award-winning Anabaptist publication featuring news about, and viewpoints of, Mennonite people and churches in Canada. For more of our content, subscribe to the magazine today. 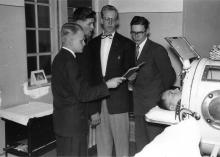 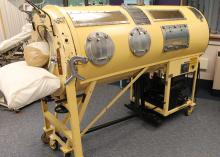 An iron lung, the iconic image of the polio epidemic of the 1950s, at the Riverview Heritage Museum in Winnipeg. (Photo by Will Braun)

Remember, vaccinations saved a lot of us from a similar cross.