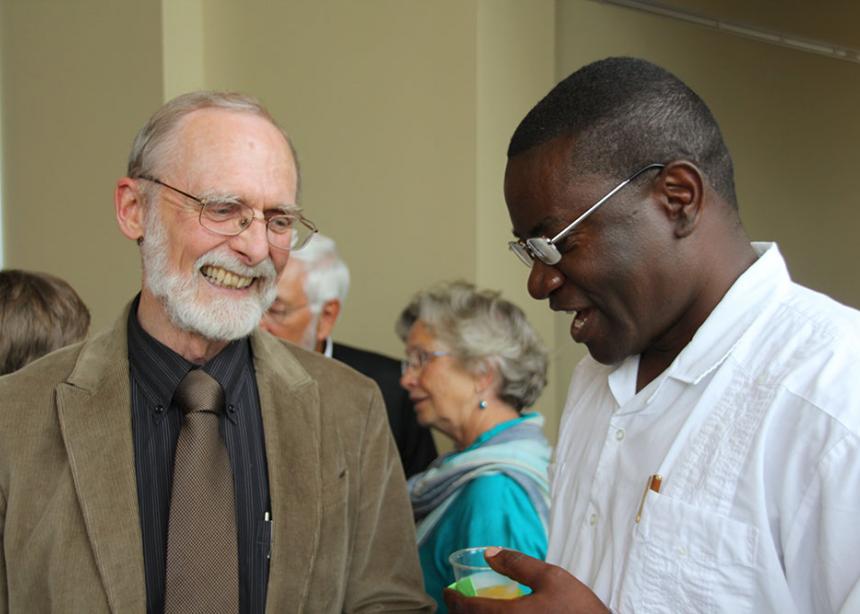 A new focus was announced this year at the Ralph and Eileen Lebold Endowment fundraising dinner, because last year it reached its goal of $1 million to fund pastoral training at Conrad Grebel University College (CGUC). This fund, jointly supported by Mennonite Church Eastern Canada (MCEC) and Conrad Grebel, was founded in 1997 and is named after Ralph Lebold and his wife. Lebold was a pioneer in pastoral education beginning in 1961.

At the annual dinner on June 11, Henry Paetkau, Area Church Minister for MCEC, and Trevor Bechtel, Academic Dean at CGUC, announced it would support a new program, the Anabaptist Learning Workshop that will begin this fall. This certificate program, designed by Matthew Bailey-Dick, will support new Canadian pastors who might lack facility in English, teach Anabaptism to leaders new to the Mennonite world and bring training to church leaders who might not have the requisite background to study at the university level.

The program will include practicum elements, in-person elements, as well as a hope for electronic gatherings in the future. Modelled at least in part on already successful training in Hispanic congregations in Toronto and Sherbrooke, Que., the program will also be funded by CGUC and by infusions from the MCEC Legacy Initiative Fund.

At this year’s Lebold dinner, Rudy Baergen spoke on the topic, “Becoming an Intercultural Church: Does it matter?” He described a few of his intercultural experiences, noting that when Christians from different cultures come together much patience and determination is necessary to understand each other. Especially in a multi-cultural country like Canada “intercultural relationships will not develop without conscientious, patient work.”

The evening also featured two other Mennonite leaders. Maciel Hernandez of Toronto Mennonite New Life Church spoke about the Spanish-language training their lay leaders have been receiving from teachers like Arnold Snyder and his book, From Anabaptist Seed. This congregation is completely lay-led since Adolfo and Betty Puricelli retired a few years ago.Fanosie Legesse, an Ethiopian living in Fergus, Ont., and attending Bethel Mennonite Church nearby, spoke about the image in Revelation of people from every tribe and nation mixing together in worship of God. He believes that the learning goes both ways—not just dominant culture to the new Canadian cultures.