Leaving a legacy of good works 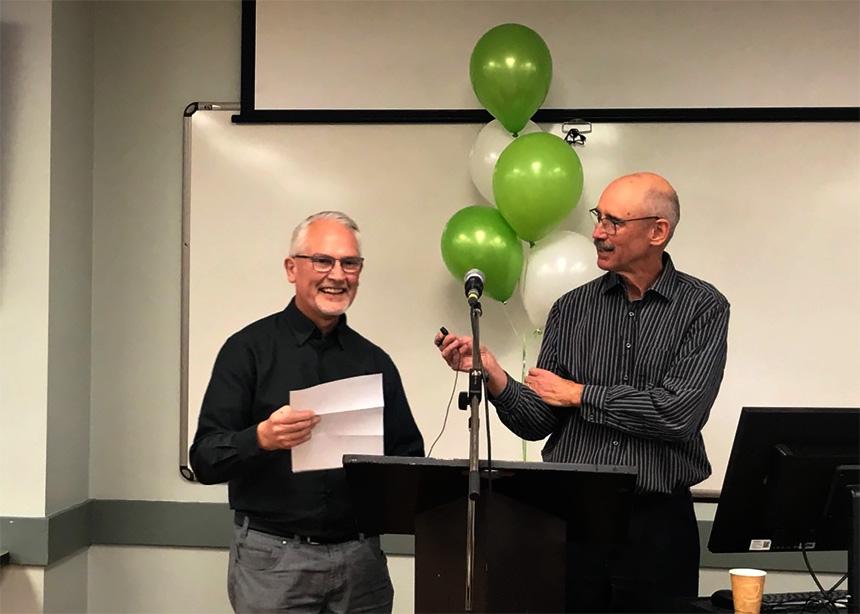 In his 15 years as executive minister of Mennonite Church B.C., Garry Janzen ordained, preached, led, coordinated and worked to inspire the pastors and congregations of the regional church. Now, as he looks to retirement, he reflects gratefully on his years in the position.

Although the title is executive minister, Janzen says, “I’m one who’s quick to say it’s not administrative. It’s one of vision and leadership.” He believes his role was largely one of “making sure all the pastors do the things they do.” “The ultimate goal was developing good leadership.” He says he saw his role as “engaging God’s world, cultivating a vision, growing communities.”

Janzen began his role in 2007, coming from the pastorate of Sherbrooke Mennonite Church in Vancouver. During his first two years in office, he visited every congregation in the regional church. Mostly those were times of transition, such as an ordination or pastoral installation. But he also appreciated being invited to speak in churches at many other times. He says he is now “blessed to have friends in all our congregations.”

Janzen oversaw many changes throughout the years, including the Being a Faithful Church process that dealt with matters of sexuality within MC Canada. Some conservative elements of MC B.C. questioned the regional church’s place within the nationwide church. In 2017, MC B.C. passed resolutions stating that pastors within MC B.C. will not officiate at same-sex weddings and that congregations will not appoint people in same-sex relationships to roles of pastor of other leadership positions.

Disagreement on these issues had the potential to tear MC B.C. apart, and some left the church because of it.

“After that, there was significant work in restoring relationships,” he recalls. “The resolution brought us together. To me, this was an affirmation for a strong love of wanting to be together, rather than people needing to have things go their way.”

The pandemic presented another challenge, as churches closed down temporarily. Until that time, MC B.C. pastors had been meeting in person regularly, and they missed the personal interaction. When one of the pastors suggested the group meet once a week via video conference, they began regular online meetings, first once every two weeks, and eventually once a month.

“Our pastors thrived,” he recalls. “We shared a lot of wisdom with each other, just because we need each other. We still do it; that’s been really, really important.”

Janzen says he has gained much during his time as executive minister. “I learned that every leader in the church is different,” he says. “I’ve learned to love people as they are, to find a good way to celebrate and find the good in them and love them as they are. Also, all leaders come up short; we need God’s grace. God is working with all of us and shaping us.”

A farewell gathering for Janzen on Dec. 6 honoured his years as executive minister, with 65 in attendance, including 17 via video conference from around B.C. and beyond. Among Janzen’s qualities mentioned in spoken tributes were his integrity, openness, kindness and caring for people.

Citing some of the controversies Janzen worked through, Frank Berto of Living Hope Christian Fellowship in Surrey, said, “Sometimes the Fruits of the Spirit aren’t the first thing out of us, but you oozed the Holy Spirit. . . . Your kindness is a tonic.”

“Thanks for being such a wonderful messenger of the Gospel,” said MC B.C. moderator Gerry Grunau, adding that Janzen was leaving a “legacy of good works.”

Now Janzen looks forward to spending more time with his wife Diane and their children and grandchildren.

He continues as chair of the board of Place of Refuge, a transitional housing ministry in Vancouver, and he will be travelling to Vietnam in February, where he has previously visited and developed a relationship with Vietnamese churches.

In the new year, he will also be taking on a role as half-time transitional pastor of Vancouver’s Peace Church on 52nd, from March until the end of the year.

“Also,” he adds, he will be “riding [his] motorcycle, playing hockey, and I have a whole shelf of books to read!”

Do you have a story idea about Mennonites in B.C.? Sent it to Amy Rinner Waddell at bc@canadianmennonite.org. 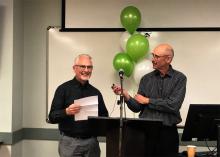