Learning to be grateful

Voluntary service in Paraguay is an eye-opening, meaningful experience for one young woman 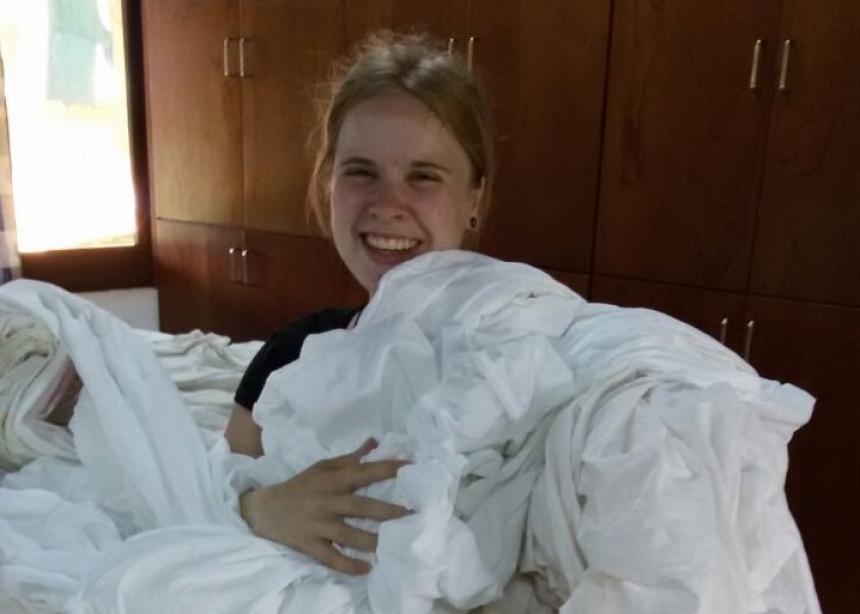 When Claudia Dueck thinks back on the voluntary service she did in Paraguay earlier this year, it’s the Tuesdays that stick out the most.

Dueck, 19, spent three months volunteering at Kilometre 81, a Mennonite hospital in eastern Paraguay that treats people with leprosy, tuberculosis and HIV/AIDS. Every Tuesday evening, Dueck and the other volunteers at the hospital would gather to sing for their patients. It was one of the only times when the volunteers had direct contact with them.

At Kilometre 81, volunteers sing on Tuesday evenings in an attempt to give patients some peace of mind before their operations, which happen on Wednesdays.

Dueck recalls one Tuesday evening when she encountered a woman who was scheduled to have her leg amputated the next day. “She was very nervous [but] she said when we came in, she was overcome with a sense of calm and [was] reassured that everything would be okay,” Dueck says. “It really made me value music and being there for people, and the power that can have in someone’s life.”

Those Tuesday evenings were markedly different from the rest of Dueck’s volunteer work at Kilometre 81. She spent the majority of her three months ironing and folding laundry, cleaning guest houses and doing dishes.

With minimal contact with patients, it can be easy to forget why one is volunteering at a place like Kilometre 81. One of Dueck’s jobs in the laundry was to sew bandages that were used to cover patients’ wounds, and she used the task to consciously think about why she was at Kilometre 81 and who she was helping.

Each bandage was blank on one side, with a pattern on the opposite side. Dueck made sure to fold the bandages with the pattern facing out, so that when it was wrapped around the patient’s limb, the pattern would be visible.

“I thought of each patient while I was making their bandage,” Dueck says. “That way I could always stay grounded in what I was doing there, as opposed to maybe just feeling like I was cleaning a lot.”

She spent her evenings with the other 10 volunteers, a group that included two Germans and eight Paraguayans. The volunteers were expected to participate in a variety of activities, including Bible studies and social activities like playing volleyball.

“We really got to know one another and spend time together that way,” Dueck says. “I made . . . very meaningful, deep friendships.”

She adds that her time in Paraguay was eye opening and challenging, particularly when it came to the poverty she witnessed.

“You learn to be very grateful for how you grew up, and you realize just how privileged we are here in North America,” she says. “I think that is something I will remember from that trip for us, just very clearly how good we have it here, and how that sometimes clouds our judgment of what’s really important.”

The Mennonite communities Dueck experienced there were more conservative than she was used to, and the gender roles were clearly defined. She found this challenging. At the same time, she admired the way she saw Mennonites in Paraguay living out their faith.

“Something that I’ve missed [after] coming back is this intentional community that is there,” she says. “That’s something grounded in their understanding of the Bible. They’re incredibly close with one another, always there for each other, constantly praying with one another, very open about their beliefs and very heartfelt.”

As she prepares to begin university next month, Dueck is grateful that she took the time to visit Paraguay and she encourages other young people to do voluntary service. “It is one of the most life-changing things you can do, especially if you can do it in a developing country,” she says. “It’s an amazing experience.” 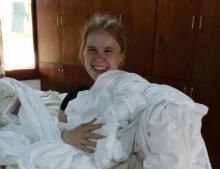 Dueck, far left, makes music with some of her fellow volunteers. (Photo courtesy of Claudia Dueck)

Dueck enjoys the Paraguayan scenery on a day off. (Photo courtesy of Claudia Dueck)