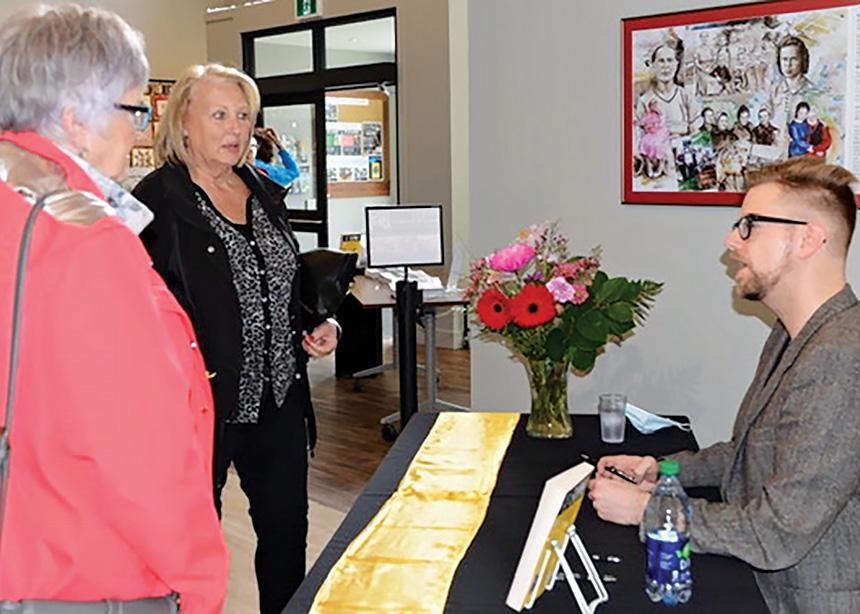 After several years of pandemic-induced Zoom book launches in B.C., satirist Andrew Unger winged his way to Abbotsford to face a living, breathing audience at the Mennonite Heritage Museum on April 2.

Unger is the writer of The Daily Bonnet, an immensely popular online column that has spawned a print book, The Best of the Bonnet, and of a satirical novel, Once Removed. Both books are published by Winnipeg’s Turnstone Press.

Considering that he gently mocks Mennonites and their ways, would Abbotsford Mennonites now become the butt of his humour? “You absorb things,” he said, “and I’ve got some ideas already.”

Unger was introduced by Richard Thiessen, the museum’s director, who noted that the author was both a direct descendant of Kleine Gemeinde founder Klaas Reimer, and his own seventh cousin, once removed. That was enough to get the laughter rolling.

Unger noted at one point that he sometimes wonders how Manitoba-centric his columns are. He need not have worried. Over the course of the book launch, giggles evolved into guffaws.

Unger reads well—he has a lively and quirky personality—but the most animated part of the book launch may have been the give-and-take of the Q&A session:

Unger’s material has changed since he began writing the Bonnet in 2016. After satirizing Mennonite stereotypes during the first months, he needed to move on. His focus is now more on current events.

Unger’s name has changed as well. Initially, he published as Andrew Bergman, over privacy concerns, but also to honour his mother (Bergman was her unmarried name) and his Grandfather Bergman, an “amateur poet.” The pen name eventually became “too much of a hassle,” he said, over inconveniences such as an uncashable cheque made out to Andrew Bergman. No Mennonite could tolerate that.

Lineups to purchase Unger’s books were long, in spite of Unger’s advice that customers might just “wait till they’re 25 cents at MCC.” 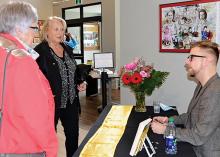