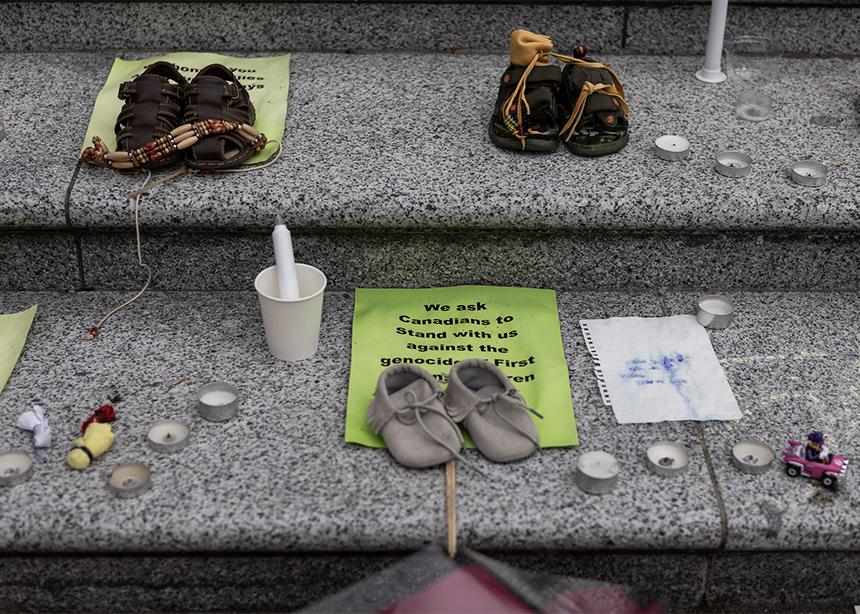 Following the discovery of the remains of 215 children on the grounds of the former Kamloops (B.C.) Indian Residential School by the Tk’emlúps te Secwépemc First Nation, Mennonite Central Committee (MCC) laments the loss of these young lives.

We acknowledge the deep grief this announcement causes all Indigenous peoples, especially survivors and intergenerational survivors of residential schools. We recognize that many people are being re-traumatized by this news, although the knowledge of the graves has been part of long-standing oral history.

As a Christian organization, we are part of the larger church that was influenced by the Doctrine of Discovery—a set of beliefs that allowed European nations to colonize any land not ruled by Christian rulers, see Indigenous people as less than human, and view their lands as free for the taking—and subsequently inflicted harm on generations of Indigenous families through the residential school system. As settlers who became part of the mainstream of society, we benefited directly or indirectly at the expense of Indigenous peoples and assimilated prejudices that gave rise to the residential schools.

As a worldwide ministry of Anabaptist churches, MCC is shaped by Christ’s call to reconciliation and peace. We commit to honouring the lives of all those whose graves were found—and will be found—by mourning with the families of these children. We commit to walking alongside Indigenous sisters and brothers seeking justice. We commit to increasing our advocacy and public engagement on issues related to Indigenous justice.

More information is available about residential schools, the Truth and Reconciliation Commission, MCC’s response to the TRC, and MCC Canada’s Indigenous Neighbours program. 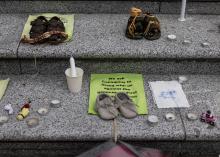 Mennonite Central Committee Canada is “Lamenting the loss of young Indigenous lives.” A lament is generally the mourning of an event(s) and a petition to God to act on the sufferer’s behalf to ease the pain and distress. For MCC Canada to voice a lament for the loss of young lives of residential school children, to voice a lament for the easing of the pain and suffering of Canada’s Indigenous peoples, a pain and suffering inflicted by Christianity at large and Anabaptist Mennonite Christianity specifically, is an irony too rich. We are asking God to heal the distress of Indigenous peoples, a distress which we are the cause of.

MCC Canada is asking Anabaptist Mennonites to respond to Christ’s call to reconciliation and peace, by “walking alongside our Indigenous brothers and sisters seeking justice.” MCC Canada commits to advocacy for justice for Indigenous peoples. MCC Canada calls on the Canadian government for a just response, and recommends churches follow the Truth and Reconciliation Commission (2015) recommendations. This is definitely a “thoughts and prayers” approach.

A Mennonite Central Committee Canada office/representative needs to be established in each major “Mennonite” centre/town, examples for southern Manitoba would be Steinbach, Winkler, and Altona. MCC representatives would be responsible for the education of Mennonite Church Canada constituents regarding the perpetration of past and present injustices against Indigenous peoples.

These injustices perpetrated by Mennonites against Indigenous peoples include the promotion of Christian “superiority” regarding “heathen” Indigenous spirituality. Injustices and reparation of “stolen land” which were readily acquired by Mennonites from the Canadian government post 1874 (around 650,000 acres in Treaty 1 Manitoba alone), with an underlying justification of the Doctrine of Discovery need to be addressed. Awareness of residential school genocide and Mennonite support of this genocide needs to be raised. Sixties scoop atrocities and Mennonite promotion of and participation in this atrocity needs to be addressed. Millennial scoop (present day fostering by Mennonites of Indigenous children) needs to be addressed. The story of how southern Manitoba Mennonite sugar beet farmers participated in the abuse of "grab-a-hoe Indians" to hoe sugar beet fields needs to be told.

In general Mennonite Central Committee and Mennonite Church Canada need to redirect their program funding to address the depth of racism of Mennonites towards Indigenous peoples which has persisted since 1874 in Manitoba and is still rampant in our Mennonite communities.

Mennonite Central Committee and Mennonite Church Canada have turned their backs on the Indigenous peoples of Canada in large part because of our culpability and participation in the very atrocities of genocide which we are lamenting. “Thoughts and prayers” for Indigenous peoples are not enough. A sustained effort of “missionaries to the Mennonites” is needed to call our people back to God and justice. Complimentary to this mission, is the idea of reparation and funding as material acts of justice for stolen land and genocide.

We claim to worship Yahweh, a God of justice, perhaps we do however this particular form of justice demanded by Yahweh must be served by those who serve Yahweh.