The Knitting Pilgrim illustrates commonalities of the three Abrahamic faiths 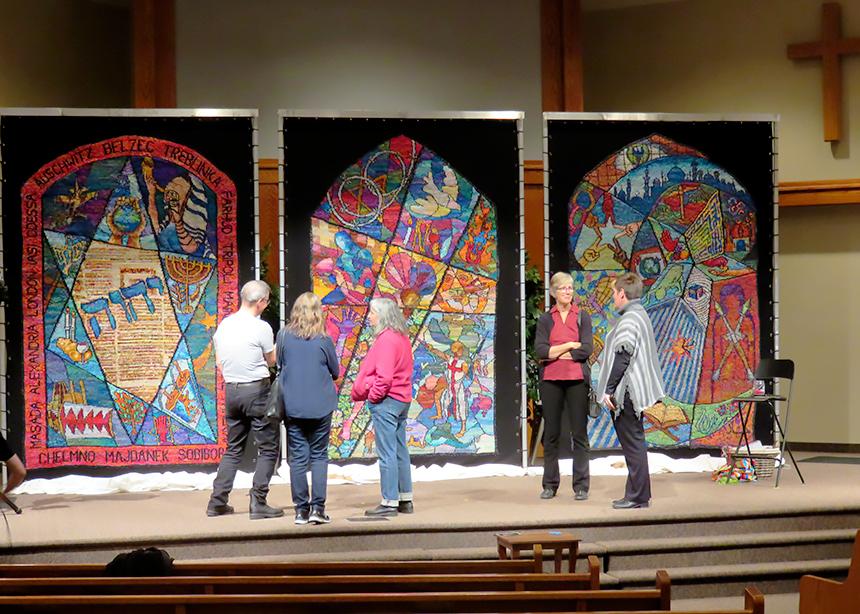 A few people linger to talk to Kirk Dunn, left, and to examine his ‘Stitched Glass’ knitted artwork after his performance of The Knitting Pilgrim at Floradale Mennonite Church on Oct. 26. (Photo by Barb Draper)

The audience was absolutely amazed when Kirk Dunn finally revealed his “Stitched Glass” knitted panels at the end of his one-man show, The Knitting Pilgrim, held at Floradale Mennonite Church on Oct. 26. The performance described his 15-year knitting pilgrimage of making three panels in the style of stained-glass windows representing the three Abrahamic faiths.

Hearing his story gave extra meaning to the intricate symbols in amazing colours shown on the panels that were each 1.5 metres wide by 2.75 metres tall. When Dunn invited the audience to come to the front for a closer look at the end of the show, the stage was quickly crowded.

The idea of using his ability to knit to begin conversations about the religions of Christianity, Judaism and Islam came in 2003, at the time of the Iraq war. After overhearing Christians in a church kitchen describe Islam as a religion of hate, he wondered what he could do for peace. Inspired by stained-glass windows that in medieval times were used to tell Bible stories, Dunn began to develop a concept. He believed that knitting is accessible and could be a good conversation-starter.

In the performance, Dunn quipped that he was an actor and knitter who could not make a living with either skill. As he told his story of how he came to put together his “Stitched Glass” project, he was self-deprecating and always credited his wife with encouraging him to continue when he was ready to quit. The frequent chuckles from the audience showed that he is a very effective storyteller.

Throughout the show, the panels were covered with white drop cloths that served as screens for showing pictures of his knitting journey. He learned to do complicated knitting with multiple colours, and he apprenticed for a month at the Kaffe Fassett Studio in England.

Dunn received an Ontario Arts Council grant for his proposal of a knitted-art installation. He decided that each panel would have the major symbol of each religion with positive aspects of the religion inside the symbol and negative aspects around the outside. He began with a full-scale drawing of the Christian panel, which he then converted to a computerized pattern. Although he had projected 10 months in his grant proposal, it took him four years to complete just the first panel. When it was done, he rolled it up and put it in a cedar chest.

The second panel took even longer because he had to do research on Judaism. Many times he wanted to quit, plagued with questions and fears, but, with encouragement from his wife, he continued on.

The five pillars of Islam have similarities to Judaism and Christianity, said Dunn of the third panel, pointing out that all of them profess faith in one God, pray, encourage charity and fasting, and make pilgrimages. “We have so much in common,” he said.

When the final panel was finished, he was exhausted but felt the project was not complete until it was publicized. He couldn’t understand why no art gallery was interested in showing it until someone explained the art world to him: If you have never sold your art, it has no value.

When he applied for a Canada Council arts grant, he was told that “knitting has no profundity.”

Believing that “Stitched Glass” needed to be seen in order to fulfill its mandate of initiating interfaith conversations, Dunn was disheartened.

When President Trump issued a travel ban on Muslims, Dunn was ready to again consider how his art might be used for peace. He put together a proposal for showcasing both his acting and knitting skills in a one-man show that would bring the “Stitched Glass” project to audiences. He called his show The Knitting Pilgrim, and this time his grant application was successful.

His own journey with the project was a kind of pilgrimage. It took him 15 years and, in the end, it was a humbling experience. “All I know is how to knit and ask questions,” he said.

Because a generous donor from Floradale Mennonite Church covered the cost of the show, an offering was taken for the Mennonite Coalition for Refugee Support in Kitchener, raising more than $3,100. 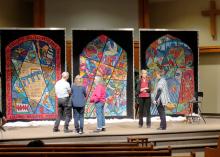 A few people linger to talk to Kirk Dunn, left, and to examine his ‘Stitched Glass’ knitted artwork after his performance of The Knitting Pilgrim at Floradale Mennonite Church on Oct. 26. (Photo by Barb Draper)