A kidney for a guitar 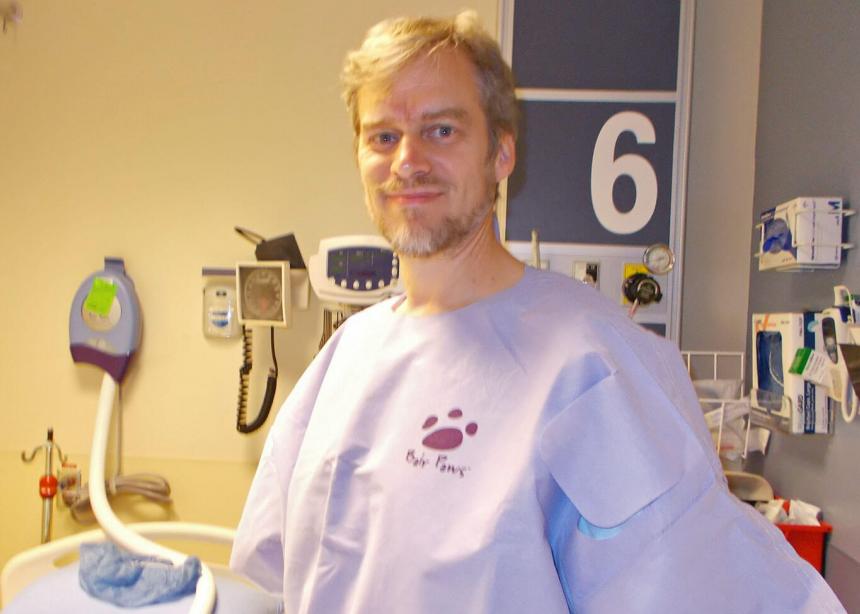 Gerald Neufeld of B.C. and Russ Sawatsky of Ontario have several things in common: they both served as missionaries in Japan, where they met their wives; and they both attended Canadian Mennonite Bible College in Winnipeg at the same time. But the donation of a kidney for one and the receiving of a kidney for the other gives the two a life-transforming connection like no other.

Neufeld, pastor of Mennonite Japanese Christian Fellowship in Surrey, also serves part-time as music coordinator of Emmanuel Mennonite Church in Abbotsford. One Sunday morning in November 2012, his 12-string guitar was stolen from Emmanuel as he was preparing to lead a worship team. He shared the loss as a prayer concern at a Vancouver pastors’ meeting. In response, the pastor from First United Spanish Mennonite Church said he knew one of his members had a 12-string guitar he wasn’t using. The member offered Neufeld the guitar at no cost, and he gratefully received it. Another request that later came from the pastors group was that someone from the Spanish church needed a kidney transplant.

Meanwhile, Sawatsky had been struggling for years with kidney failure and blogging about his journey (see kidneyforruss
.wordpress.com). He went on medical disability leave when he began dialysis in 2014.

Neufeld had already given some thought to being a living organ donor when he read in Canadian Mennonite (March 27, 2013) of fellow Mennonite pastor Carol Penner’s positive experience of donating a kidney. When he learned that the person from the Spanish church in need of a kidney was from the same family that had given him the guitar, he began to feel that donating one of his kidneys was something he could—and should—do.

“I started thinking about it more, started researching,” says Neufeld. “I found out there was a very slim chance of complications [for the donor]. The only restriction was that you can’t go skydiving!” He says he prayed a lot about the decision to consider being a donor. One verse that came to mind was Luke 3:11: “The man with two tunics should share with him who has none.” Could this possibly apply to kidneys as well?

The next step for Neufeld was to register with the Paired Kidney Exchange Program. In this program a person in need of a kidney has a willing donor, but the two are not a match. Another patient has a potential donor, and they are not a match, but that donor is a match for the first patient, and likewise the other donor is a match for the second patient. The surgeries are coordinated so both patients receive the donated kidneys around the same time.

During his year of waiting, Neufeld learned that the person from the Spanish church had received a kidney from a deceased donor, but he decided to stay with the program anyway. Then he learned that his friend Russ Sawatsky was on the list for receiving a donated kidney, and because Sawatsky had another potential donor as well, Neufeld became a co-donor. Sawatsky’s chances for getting a kidney were now increased.

Sawatsky eventually received his new kidney last summer, and Neufeld donated his in fall. “I don’t know who donated a kidney directly to me, and I am not meant to know,” Sawatsky says.

For Neufeld, after-effects from the surgery were minimal, and he chose not to dwell on the possible complications. The worst he experienced were sleeplessness and “wild reactions” from pain medication, a time he says he prayed the most. He also sensed the prayers and support of his family and wider church community.

Neufeld is often asked if he feels God was leading him to donate a kidney. He answers that it always felt like a series of steps, beginning with the prayer request following his guitar loss. “A lot of people see kidney donation as a huge decision,” he says. “It didn’t feel like a huge decision for me. Maybe part of it comes out of an obligation to help people where I can. How do we bear one another’s burdens? Where might God be calling us? It might be to take small steps of faith and see what God can do.”

For his part, Sawatsky does have to take anti-rejection drugs, but says he now feels freedom in not being tethered to a dialysis machine. “[Gerald’s] willingness to undergo surgery and weeks of recovery in order that I might regain health expresses a degree of altruism and generosity that I find hard to comprehend. What else is there to say . . . except thank you!” 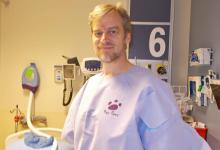