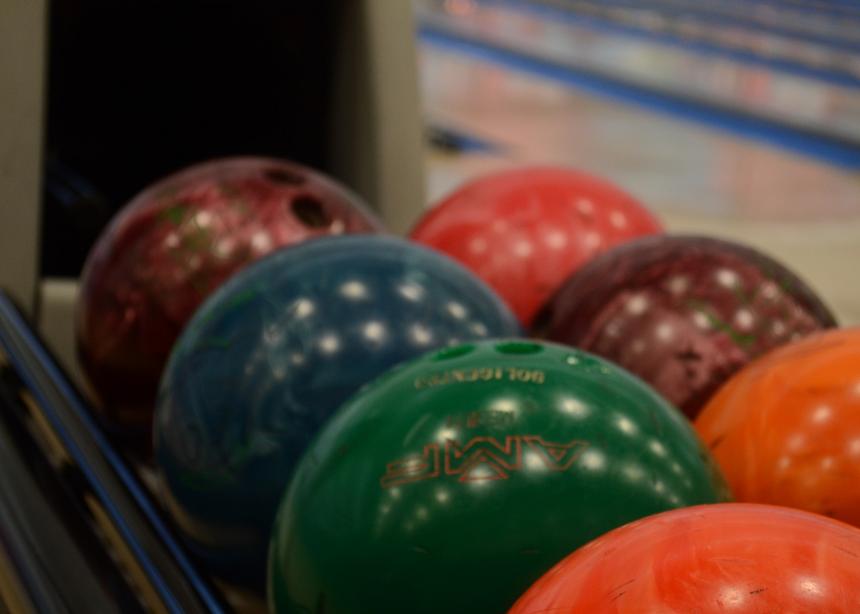 I recently attended a performance by crys cole, a Berlin-based sound artist at a small art gallery in Winnipeg’s Exchange District. The piece performed that night was entitled “Keeping the Ball Rolling.”

First initiated in 2014, “Keeping the Ball Rolling” is an ongoing work of cole’s with no intended end, continuously unveiling itself in new ways. In each performance, cole takes a five-pin bowling ball and rolls it along the floor. As the ball rolls, microphones set up around the room pick up different timbres and resonances, which build and are then played back to the audience. The sounds shift and and change, as cole continues rolling the ball.

The performance attempts to play with the ways in which we live as people inextricably tied to the material aspects of daily life. Each room the piece is performed in will generate its own unique responses. No two performances of the work will be the same. It also shows how we remain involved in the unveiling of something that transcends time and space. No matter where the piece is performed, or when, it will involve the rolling of a five-pin bowling ball. This is an act repeated, regardless of the context in which the work is performed. The piece draws the audience into a strange state, where the immediate physical realities of a room become haunted by something that exceeds it.

Since August, I have been working at the Mennonite Church Manitoba offices as co-director of Leadership Ministries with Karen Schellenberg, supporting and caring for pastors and spiritual leaders serving the regional church’s congregations.

I like to think of this work as participating in a similar performance as that found in “Keeping the Ball Rolling.” Hearing more directly from churches across our regional body, my appreciation for how our local contexts give shape to our churches has deepened. No two congregations are the same. The material needs of the people and places we gather with for worship differ from congregation to congregation. Pastoral work is inextricably tied to the contexts in which it is performed, tending to and nourishing the physical lives of those gathering for worship.

Yet it is also work that transcends our material lives. We are called to equip our congregations to see how the drama of Christ’s life and death continues to be performed today. Across time and space Christ has been found among those victimized by the powers and systems that dominate our daily lives. We have seen him working to free the imprisoned; provide shelter for the unhoused; and grant justice to those marginalized by race, class, gender identity or sexual orientation. Regardless of the contexts out of which we work, the drama of Christ’s life, death and resurrection continues to be unveiled.

The church, as is said ad nauseum, right now is changing. What cole’s performance reminded me of is that this will always be the case. The church exists as part of a continuous process of the unveiling of Christ. In specific locations, and at particular times, the love and justice of Christ are being performed. This is a performance repeated across time and space. Our task is to help keep the ball rolling.

Read more From Our Leaders columns:
Eco-theology: On Earth as it is in Heaven
Only together can we heal
A new chapter?
A narrative of hope
Evangelism that heals