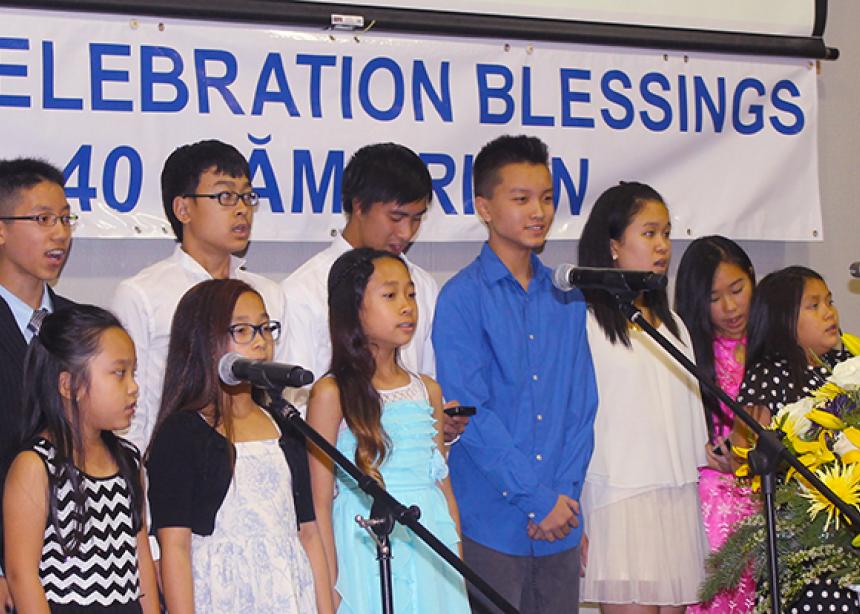 Forty years after refugees fled Vietnam and communist oppression for Canada’s shores, the Vietnamese community in B.C. expressed gratitude to God at a celebratory evening on Aug. 30, 2015.

The event was co-sponsored by Vancouver Mennonite Church and Abbotsford’s Emmanuel Mennonite and Vietnamese Christian churches, and was hosted by Emmanuel.

In welcoming the guests, April Yamasaki, Emmanuel’s pastor, posed the question, “Is ‘celebration’ really the right word? This is a story of loss, a story of exile, painful in many, many ways.”

Testimonies and tributes followed a buffet dinner of Asian food. Reg Reimer, who had been a missionary to Vietnam and the first president of World Relief Canada, reminded the audience of the history of the “boat people” who had come from Southeast Asia in the 1970s. He showed a ship’s compass that had been given to him by refugees, the only valuable thing they had. “The compass is symbolic,” said Reimer, “as we were able to point thousands of refugees to the way, the truth and the life.”

Later, Reimer gave a dual English and Vietnamese message entitled “What’s mine is yours if you need it,” based on the story of the Good Samaritan. “There are both victims and Samaritans here tonight,” he observed.

Abbotsford Mayor Henry Braun acknowledged the tremendous sacrifice of those Vietnamese people who travelled more than 10,000 kilometres, leaving behind family and way of life, to settle in a new land. He praised their “determination, strength and courage,” and added, “We need to keep alive these stories of hope.”

Ed Fast, Canada’s minister for international trade and MP for Abbotsford, talked of God’s faithfulness over 40 years following a “painful exile,” and said, referring to the history of Mennonite migration, “We, as Mennonites, have so much in common with the Vietnamese.”

Also on the program were a testimony by Dong Van Tran about his experience escaping on a boat with 65 refugees, a skit and several musical numbers by members of the Vietnamese community. An offering was taken for special needs in Vietnam.

For background, see “A history of private sponsorship”