Justice in the name of Jesus 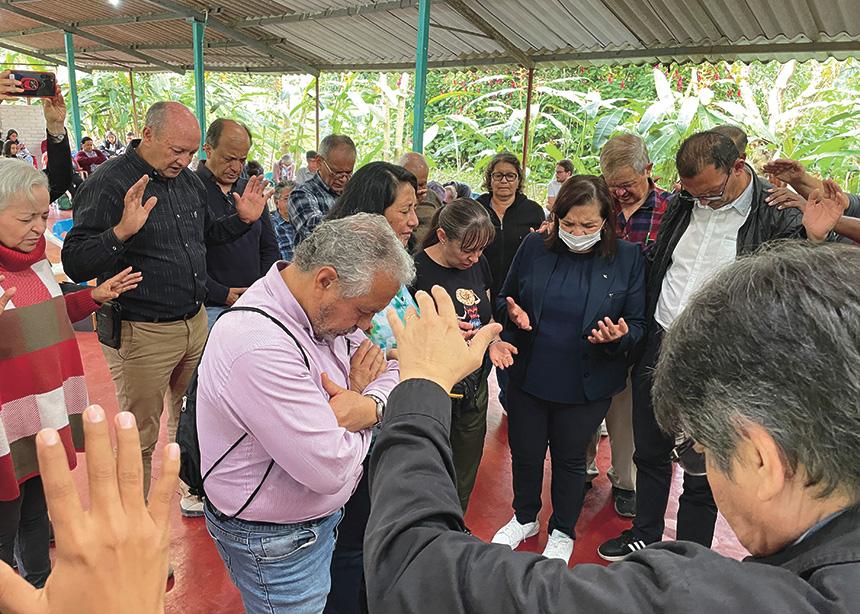 Some Mennonites raise their hands when they sing. Others don’t.

Some attend climate rallies and examine decolonization. Others don’t.

Some Mennonites hear sermons focused on the Word and personal relationship with Jesus. Others hear sermons that draw on Pete Enns; Mary Oliver, a modern day mystic; or the Intergovernmental Panel on Climate Change.

My point, which I make with hesitation, is to identify two centres of gravity within Mennonite Church Canada: one, more evangelical; the other, more oriented toward peace and justice (climate, reconciliation with Indigenous people, LGBTQ+ inclusion, etc.).

This is not news. But it is also not discussed much. At least not openly.

Of course, generalizations are tricky. Definitions differ, lines blur, exceptions pop up, and a sizeable segment of MC Canada congregations fit neither evangelical nor justice categories. Still, I hope generalization allows for discussion of a potentially creative tension.

A further generalization is that the more evangelical churches tend to be predominantly made up of newcomers from Africa, Asia or Latin America. (I recognize Euro-Canadians are also relative newcomers.) Conversely, emphasis on peace and justice is more common in Euro-Canadian congregations.

I recognize that some congregations include both newcomers and Euro-Canadians, but many are almost exclusively one or the other.

I also recognize that some people find it awkward to speak openly of these differences. Indeed, these are difficult discussions. I proceed with a profound belief in the awkward value of diversity and a prayer for the free flow of grace.

Personally, I lean more toward peace and justice. But I am also drawn to the spiritual intimacy and passion I have sensed among newcomer churches. My real quest, however, is for the point where the two become one.

Jeanette Hanson hears people within MC Canada express a desire for an evangelically enlivened approach to peace and justice. As director of International Witness for MC Canada, she sees the coming together of the two as a “holy place.” Conversely, she says there’s a “risk of both sides losing out if we go our separate ways.”

Hanson recounts a meeting of various Anabaptist groups in Hong Kong some years ago, at which the leader of a session asked participants to line up across the room according to where they fell on the spectrum I have presented above. Awkwardness filled the room until Max Ediger, a Mennonite Central Committee worker of some physical stature, strode up and laid his full frame out on the floor, spanning as much of the spectrum as possible and declaring that he cared about peace and justice because he loved Jesus.

In Thailand, churches are inviting people to follow Jesus in a very relational way while also addressing food security by providing organic food that is not mass produced. Some pastors are involved in legal action against an agri-food giant that is squeezing farmers.

Here in Canada, Hanson observes that there are Mennonites who “want to see a deep sense of why we’re doing social-justice work; at the heart of it has to be Jesus, otherwise we’re just another really good community organization.”

Justin Sun has navigated much of the spectrum between evangelicalism and peace and justice. He grew up in a tight-knit evangelical Chinese church in Edmonton, surrounded by extended family. “I was involved with everything,” he says of church life.

In 2016, an online search for Christian colleges led him to Columbia Bible College in Abbotsford, B.C. He knew nothing of Mennonites, nor had he ever been in such a predominantly white setting.

Amid a “massive culture shock” at Columbia, Sun was also encountering “radically new ideas of faith and what the Gospel is about.” This differed from the more heaven-oriented theology of his youth. The deconstruction and reconstruction was both “painful” and thrilling. He says it was a “privilege to wake up every day and study the Bible.”

Now, Sun, 28, serves on the pastoral staff of both Peace Chinese Mennonite Church and Peace Mennonite Church in Richmond, B.C. He preaches about the “radical call of Jesus” and racial reconciliation, about our “belovedness” and climate change, as well as Dirk Willems.

Sun admits that, on peace and justice issues, he “came on pretty strong” in his early sermons. “I’ve had to dial back a bit,” he says. The congregation is grappling with peace and justice questions. Sun notes that, in 50 years, Richmond itself—with an average elevation of one metre above sea level—could be under water. Climate is an existential question.

In relation to the tension between evangelicalism and social justice, Sun takes a critical step back. He says the “tension exists largely because there are groups that are dominant and groups that are pushing against that.” For groups whose well-being is fundamentally threatened, social-justice issues are not “issues;” they are life. Those groups do not have a choice of whether to get involved. For them, it is about the “fundamental outworking of the Gospel in their life and context.”

Social justice as a “category,” Sun says, “is largely the product of privilege, comfort, options.”

In this context, the Good News, says Sun, is that “the Creator God identifies so deeply with the poor, oppressed and marginalized, that [God] came in the form of a man who fundamentally took on those qualities in order to announce life and liberation over and against them—victory over these deep-rooted systems that cause death and destruction.”

In response to my question about the tension between newcomer evangelicalism and Euro-Canadian social-justice emphasis, Joon Park focuses on the cross-cultural dynamic. Creating transformative connections between BIPOC (Black, Indigenous, People of Colour) Mennonites and Euro-Canadian Mennonites is his passion. Park serves on the MC Canada Intercultural Church Steering Committee.

He and his wife, Shim Beack, have attended Emmanuel Mennonite Church in Abbotsford, B.C., for 17 years. Before coming to Canada, Park lived, worked and studied in his native Korea, as well as in Germany and the United States.

Park says that, in order to “retrieve the real meaning of the Gospel,” the church must “embrace all people regardless of any kind of difference.” His vision of true “interculturalism” is one in which we “break down all the walls and barriers,” share all that we have to share, and come together in “worship and praise.”

Park’s vision is not satisfied by mere numbers, multicultural representation, or anything more superficial than coming before Christ in transformative, integrative, soulful, “all-embracing” interculturalism.

This profound sharing, he says, encompasses the “true meaning of social justice, not different from the true meaning of the Gospel.” It also encompasses evangelism. As with Sun’s view, here peace and justice meld into the heart of faith expression.

Moses Falco expresses this synthesis in his own way. Now a pastor of Sterling Mennonite Fellowship in Winnipeg, Falco was raised in a Baptist church in Toronto. He and his wife Jessica, who is from Sterling, met while at Bible school in Germany.

Falco recalls working at summer camp in his youth and being asked at the end of the week, “What’s your number?” That is, how many kids “said the [sinner’s] prayer?” How many were converted?

He “felt uncomfortable” with that form of sharing the Good News.

Falco understands why some people want to “push away” from evangelism. When Christians believe they “have the ‘capital-T’ truth to themselves to bestow on others,” he says, their actions have too often been “coercive and oppressive, more than invitational.”

But Falco still very much wants people to “find healing and forgiveness and life in Christ.” He wants people to “know God and find themselves in a Christian community.” He also actively works for climate action and systemic justice for Indigenous peoples.

Falco says that some people just want to address justice and oppression, while others focus only on people coming to trust Jesus as their personal saviour. He says these two impulses should not be separated, and justice work must be undergirded by a faith “intention.”

Falco recounts the story of Churches for Freedom Road, an initiative that saw dozens of Manitoba churches—Menno­nite, Baptist and others—support Shoal Lake 40 First Nation in its effort to obtain an all-weather link to the rest of Canada. Falco says that, while in that case it would have been problematic and insensitive to speak openly about Jesus at rallies and meetings—”almost like a bait and switch”—churches were involved because they felt called by God to respond to injustice.

“Not every scenario calls us to preach the Gospel,” says Falco. Sometimes Christians must support those who are oppressed and then let go, allowing God to work.

Falco says that some among us “would feel frustrated with some of our Mennonite groups that focus solely on social justice without even mentioning that their intention is linked to faith in Jesus. It begs the question: Is it linked?”

For the people I spoke with, the answer is that, if that link can indeed be brought to life, sparks of holiness will spread on earth and rise to heaven. 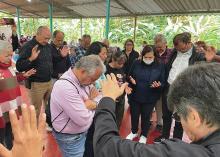