Second in a five-part series leading up to the Mennonite World Conference assembly in Harrisburg, Pa. 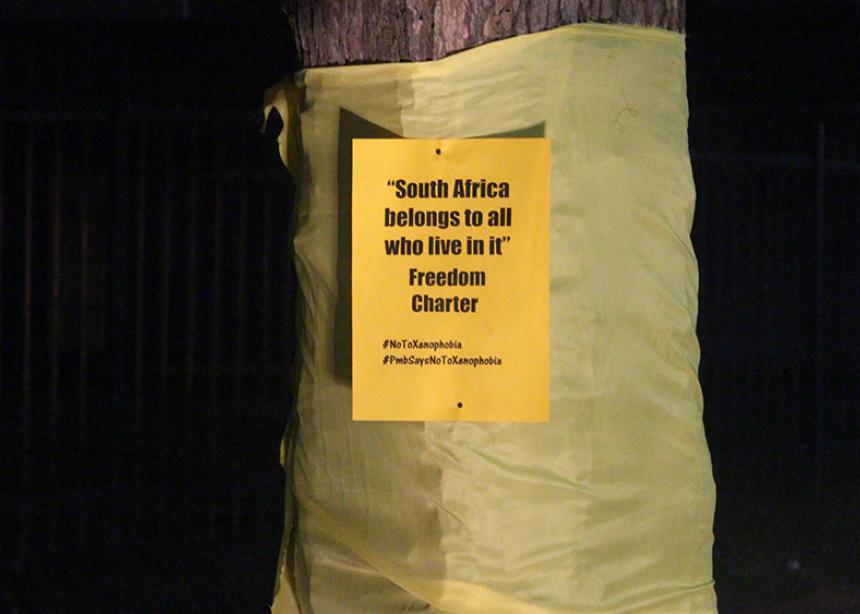 <p>Pressure is increasing once again. The violent and repressive imagination created by apartheid still dominates. Recent violence directed at African foreign nationals is but one example of this. (Photo by Karen Suderman)</p>

In 2009, Canada began a Truth and Reconciliation Commission (TRC) process that followed the example set by South Africa after the fall of apartheid. Given Canada’s desire to learn from South Africa’s creative model of the TRC, it might also be helpful to consider South Africa’s post-TRC experiences.

Apartheid was a policy of racial segregation. While apartheid officially began in 1948, the practice of racial separation and white European dominance was common since the first settlers arrived in the 17th century. The introduction of apartheid as law was accompanied by an evangelical zeal that justified ever-increasing forms of violence and repression to maintain the desired separation. Apartheid created inherent privilege for the white minority in South Africa with governmental policies that increasingly oppressed the majority of the population who were considered “non-white.”

After the demise of apartheid in 1994, South Africa was left to deal with its history of violence, atrocities and injustice.

In order to wrestle with its painful history, South Africa established the TRC in 1995. This was the first process of its kind. It was a mechanism that would work towards national restoration, reconstruction and healing. Desmond Tutu, the appointed chair of South Africa’s TRC, noted in an April 25, 2014, article in The Mail & Guardian: “We were a wounded people, all of us, because of the conflict of the past. No matter on which side we stood, we all were in need of healing.”

The South African TRC confronted the gross violations of human rights with the hope of getting a clear and truthful understanding of the violence and dehumanization that were consequences of apartheid, so that forgiveness and reconciliation could be made possible for the nation as a whole. To paraphrase Tutu: “In order to forgive, we must know whom to forgive for what.” Truth was needed so that reconciliation could follow.

The commission was an innovative, creative and eye-opening way of wrestling with South Africa’s painful history. Indeed, it has become an example for others. Those who were oppressed, repressed and dehumanized by the apartheid regime were able to share their stories, and ultimately their pain and suffering. They were able to regain a sense of dignity and humanity. For once, they mattered and were heard. Whites, on the other hand, could no longer hide behind the pretence of ignorance as to the horrid cost paid for their privilege and comfort.

The TRC served several significant purposes. It provided a venue for the truth to be told about apartheid: the atrocities that it created and justified, and the society it engineered. The TRC provided an avenue through which victims could find their collective humanity as well as release from what had happened to them. It lifted the shroud of secrecy that clouded much of South Africa’s history.

As South Africa transitioned from apartheid to democracy, the TRC played a particularly crucial role as a pressure-cooker valve. The apartheid system had generated much pent-up tension and steam, and the TRC can be credited with helping to prevent a full-scale “explosion.”

South Africa is often touted as an example of a relatively peaceful transition of power, and the TRC was one of the mechanisms that allowed for the birth of a new South Africa. This is surely worthy of praise.

Life in the aftermath

But today, 17 years after the TRC’s conclusion, obstacles in South Africa’s journey towards reconciliation are becoming increasingly apparent. Pressure is increasing once again. The violent and repressive imagination created by apartheid still dominates. Recent violence directed at African foreign nationals is but one example of this. (See “Pushing back with colour”.)

Although the TRC served a critical role in releasing some of the steam, South Africa continues to grapple with what reconciliation actually means.

This term was often used to encourage civility between races without substantially shifting the apartheid-created social order. This had the effect of pacifying those who challenged the status quo while maintaining the logical inevitability of separation, inequality and injustice.

Others understood true reconciliation as that which would radically alter the apartheid-created social order so that justice and equality could exist for all. This is more in line with the biblical notion of reconciliation. It is deeply unsettling because it tirelessly pursues right relationships with God, with one another and with creation. It challenges and alters our ways of being so that right relationships are a priority.

After the demise of apartheid, even those who were battle-hardened in the struggle against it and sceptical of reconciliation, were willing to begin talking about it. The anti-reconciliatory system had now been eliminated, at least in theory, thus making room for the possibility for true reconciliation.

Unfortunately, the different understandings of reconciliation became a stumbling block for the TRC and beyond. Some, for example, thought that South Africa would be reconciled once the TRC process finished. Some assumed that people would suddenly be able to get along with each other.

However, the reality experienced by most South Africans has not been foundationally altered. Privilege and inequality continue to dominate. In fact, the gap between rich and poor has become worse. Tutu and many others in the TRC process tried to inform the nation that the TRC should be seen as the beginning of a longer walk towards reconciliation. However, the intentionality required for true reconciliation has been put on the back burner if it indeed remains on the stove at all. Tutu notes that there is a lot of “unfinished business” in re-weaving the fabric of South Africa’s society.

On Oct. 28, 1998, Tutu presented the TRC’s final five-volume report to South Africa’s first elected president, Nelson Mandela. With the report, the people and the church assumed that the “ministry of reconciliation” was now the responsibility of the state.

Sixteen years to the month later, a re-enactment of the TRC Faith Communities Hearing invited churches to share what they have been doing towards reconciliation since the original hearing in 1997, when most of South Africa’s faith communities committed to dismantling apartheid and to pursue reconciliation, both in society and in their own denominations. But during the re-enactment, they admitted that they had “dropped the ball,” and had substantial shortcomings in meeting their commitments. Several Christian denominations, for example, are still racially segregated.

Although this was a sad realization, ironically it was also quite hopeful because, at least officially, the church in South Africa has begun to remember and re-commit itself to the pursuit of reconciliation. Many churches and denominations are also asking why they assumed that the state would bring about reconciliation.

Since the close of the TRC in South Africa, appalling violence continues. Inequality is increasing. The rich have maintained their wealth while the poor continue to live on scraps. The education system is failing. Striking miners are gunned down by police. Obscene spending is justified on the president’s private property. Corruption is rampant, according to Tutu in the same Guardian & Mail article.

Why, the churches ask, have they assumed that a neo-liberal government would be the agent of reconciliation? After all, it operates on assumptions of individual competition, on freedom from the other rather than communal belonging to each other, and on the myth that government is somehow neutral in ordering and structuring society.

The church in South Africa may be re-awakening to its biblical calling as agents of true reconciliation. The Apostle Paul reminds us that true peace and reconciliation do not come from those who rule, but from those who seek to be part of God’s new creation and humanity in the world (Ephesians 2:11-22; II Corinthians 5:17-21). The responsibility of the church is to reveal this new reality of God’s new creation and humanity (Ephesians 3:10). There are some hopeful sparks indicating that the church’s amnesia is ending, and that it may rekindle its mission of actively pursuing that which will allow people to live rightly with one another.

South Africa’s example raises questions for Canada and its post-TRC era. What will reconciliation mean between indigenous and settler communities? What actions should we stop now to prevent further harm to relationships? How can settlers meaningfully apologize for the way in which we have dehumanized our indigenous brothers and sisters? How will settlers pursue the restoration and restitution that true reconciliation with Canada’s Indigenous Peoples will require? Will we also be tempted to think that responsibility for reparation is the government’s alone? How will we be a community—a people or church—that will tirelessly seek to demonstrate God’s new creation and be a witness to God’s new humanity? How will this change the way we relate to—and include—indigenous sisters and brothers? How can we embody a way of being that demonstrates our common humanity and belonging?

The TRC process may be coming to an end, but the journey towards reconciliation is far from over.

May God be with us as we continue this journey.

Andrew Suderman is a Mennonite Church Canada worker in South Africa with his wife, Karen, who wrote the reflection, "Pushing back in colour."  They coordinate the Anabaptist Network in South Africa (anisa.org.za) as it strives to walk with, support and grow communities of peace, justice and reconciliation.

This article was commissioned by Canadian Mennonite in preparation for the July 21-26, 2015, Mennonite World Conference Assembly. See others in the series:

Part 4- “The Sermon on the Mount: living it out in mind and heart”

1. Have you ever been in a situation where hatred was expressed against you or people you know? What is your initial response to hatred or injustice? What are some examples of creative or loving responses to violence or injustice? What role does the church play in teaching us to respond nonviolently?

2. Andrew Suderman reports that the churches of South Africa assumed that reconciliation after the end of apartheid was the responsibility of the state, not the church. What is the role of the Christian church in working at justice and reconciliation in society?

3. How much has the Mennonite church been involved with the Truth and Reconciliation Commission (TRC) dealing with past wrongs against Canada’s Indigenous Peoples? Has the TRC been mentioned in your congregation? How could your church work at reconciliation with indigenous people in your community?

4. Where are the biggest needs for reconciliation in your congregation or in your families? What can the church do to promote love and reconciliation? When does publicity help or hinder the work of resolving disagreements or injustice?

Pressure is increasing once again. The violent and repressive imagination created by apartheid still dominates. Recent violence directed at African foreign nationals is but one example of this. (Photo by Karen Suderman)