JoinMen for a better world

A statement from Mennonite Men 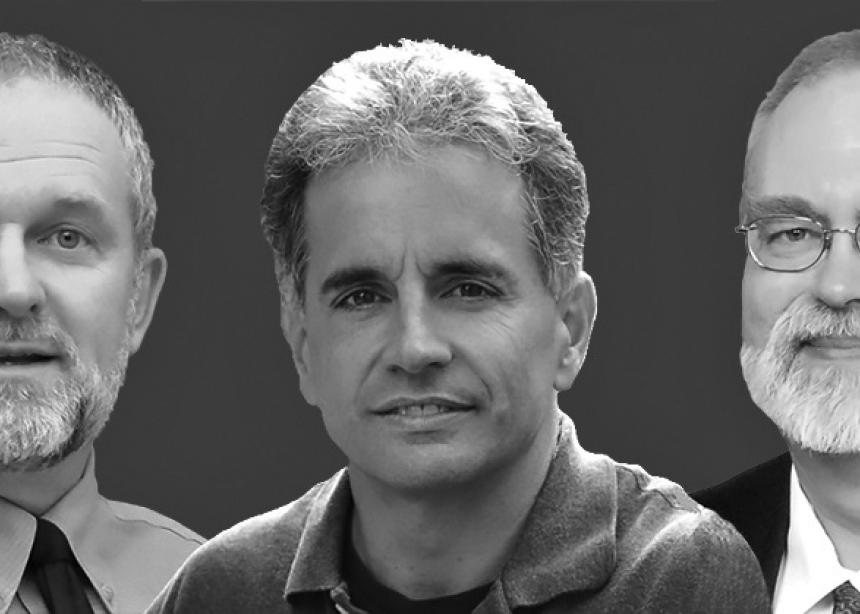 Representatives of the organization Mennonite Men call for truth-telling about sexual abuse and invite men to embrace a healthy masculinity. From left to right: Don Neufeld, Steve Thomas and Hans Peters.

In recent months there has been unprecedented exposure of sexually predatory men in high places, as well as unprecedented violence perpetrated by solitary men with little or no regard for human life. Whether acting out of a sense of entitlement to use women, children or other men as objects for self-gratification and demonstration of power, or raging at humanity out of what author Michael Kimmel calls “aggrieved entitlement,” an identifiable group of men has triggered a reckoning for all men.

While the majority of males do not perpetrate these types of actions, all men must consider how we participate in a patriarchal system that enables this behaviour and respond. Victims, survivors and their advocates have called out to men for decades, if not centuries, to be more than bystanders, and too often defensiveness or an uneasy silence has been the response. In the face of the current exposure of a toxic masculinity in politics, entertainment and religion, our silence as men who claim to follow Jesus must not be our witness to the world.

We must start with truth-telling, naming the ways we are complicit in the dynamics of patriarchal privilege, how we’ve benefitted from it, how we’ve contributed to others’ oppression. We must lament for the pain inflicted by men on others through the exploitation of power, from forms of violence of mammoth proportions to expressions of power that are subtle and often unintentional. We must own what is ours to own, for only when we name our reality can we begin to work toward change. A thorough accounting of the breadth of abuse of power will lay the groundwork for much-needed alternatives.

Critical to creating change is the recognition that many men have also suffered under the burdens of patriarchal masculinity, as seen in the fact that men die on average approximately six years sooner than women, men are more likely to die a violent death at the hands of other men, and that men die by suicide three to four times more often than women. The denial and suppression of a healthy emotional life, repudiated by male socialization as too “feminine,” leaves all too many men with a limited scope of experience of life, and specifically some of the tools needed to negotiate stress and conflict in positive ways.

As men, we must not remain incapacitated, however, by the heaviness and shame of lament, but rather rise to embrace healthy masculinity. It’s tempting to point fingers at the publicly fallen and to name their need for change. But as we recognize that masculinity too often falls prey to baser impulses, we can begin to redeem our own masculinity and envision healthier expressions. As men committed to our personal journeys of healing, we must join the critical work of dismantling oppressive systems and reconstructing ways of living that serve the well-being of all people.

Christians have clearly not been immune to the tragic dynamics of male-perpetrated sexual and physical violence. In truth, Christianity has been complicit in the development and maintenance of systems of inequity that foster such abuse. Some traditional interpretations of Scripture, translating historical social constructs of patriarchy into prescriptions for all the ages, have blessed the subservience of people of certain classes (women, children, people of colour, the marginalized “other”) and of creation itself to the whims of males. Even our own historical Anabaptist ethic of yieldedness or quietness (“the quiet in the land”) has tended to “shush” victims, makes suffering heroic, and leaves leadership largely ineffective in calling out such evil in our midst.

The consistent message in the biblical narrative is to remember who we are as God’s beloved children, respond to our failings with repentance, and follow the way of Jesus, who has broken down the dividing walls of hostility and is creating “one new humanity” of God’s shalom (Ephesians 2:15–16). Christ calls us to be disciples, living in relationships of love and trusting that peaceful ways of living will bear fruit in our lives as people of God. It is critically clear that men, as participants in this invitation to faithful living, have much opportunity to change, learn and thrive, and to in turn bless the lives of all those with whom we do life!

The board of Mennonite Men has declared its commitment to address this urgent need for transformative change for men, recognizing the hopeful manifestations of God’s loving kindness that can flow to men and in turn to everyone whose lives we touch. To this end, we are expanding our work beyond JoinHands (grant making) to men’s inner and relational work with JoinMen (www.mennonitemen.org/joinmen), our program to promote healthy masculinity. We are pursuing opportunities to learn from and work with women in this effort. We call men to engage in this work to bring about God’s healing, love and justice for our world.

Representatives of the organization Mennonite Men call for truth-telling about sexual abuse and invite men to embrace a healthy masculinity. From left to right: Don Neufeld, Steve Thomas and Hans Peters.

Thanks, Don, for the observations. The recent shooting in Florida is another reminder that young men are often not seeing adequate opportunities to address their personal issues. The phenomenon of large numbers of women opting for "concealed carry" permits also indicates a tragic flaw in how we deal with angry, "acting out" men.
Schools use expulsions when institutionally they're incapable of dealing with difficult and immature students; our society often employs the same tactics for persons of all ages. Non-conforming individuals are often excluded from affinity groups, including faith organizations, during the times when their social needs for acceptance are especially acute. We perhaps ought to note that, judging from the gender identities of scarred people living on our streets, both men and women are being expelled from the very support systems that humans require.
But it's true that men on the whole, even those of us who think we're "normal," don't always have access to the same helpful affinity structures that women employ.

Is it a requirement that we sign on to the analysis and jargon as well as the goal? The goal is an aspiration I share. The analysis and jargon is one I find flawed. So is there openness for those of us who don't share the ideological expression of faith but find the goal of great significance, or must we look elsewhere?

Hello Walter. We fully acknowledge that this is one perspective at one point in time. Importantly, this is a start, a stepping into a conversation that we as men have all but avoided, as women have done their important work over the last 50 years of finding their voice within a predominantly male-driven discourse in most areas of Christian life. This is a journey about reflecting on our own lives as men, not just pointing fingers and finding excuses to blame about "them." Join the conversation, challenge the "flawed" "analysis and jargon," and offer your ideas towards a goal of living more peacefully and respectfully with each other. Hopefully the conversation will swell with time to overwhelm the silence!

Don, thanks for the engagement. Here on the wet coast, a pastor has begun a men's retreat (where I have had the privilege of sharing). It's not complicated. Grandfathers, sons and grandsons gather: they fish, play games, and barbecue together. Many are peripheral to faith but long for friendship and community. Their sense of isolation leaves many men disoriented, and that results in destructive behavior. Here, some of us sit and watch the sun rise, and young men see serenity and are drawn to it... and from there conversations begin. Is this the kind of thing Mennonite Men is interested in? We've begun this on our own, in response to a need we intuited more than thought out.
Kind regards.

We would welcome the establishment of connections on the West Coast. What you are describing is exactly the type of offering for men that we are wanting to support and resource both in Canada and the U.S. We are having our third Mennonite Men retreat in Ontario on Father's Day weekend. For more information, Hans Peters is the coordinator for Canada and would be the person who could work with you (or anyone else) to strengthen connections with Mennonite Men. He can be contacted at HansP@MennoniteMen.org.