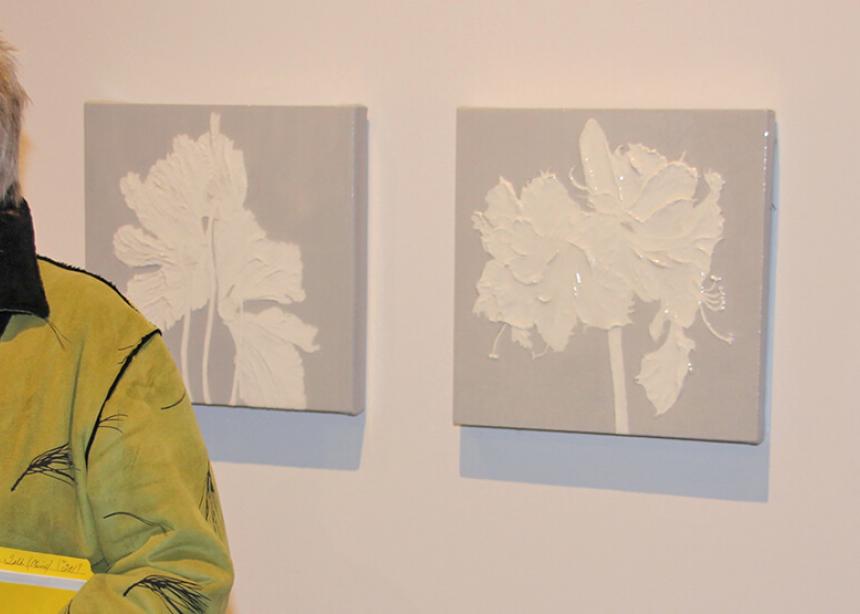 Jan Fretz has been working at her honours four-year fine arts degree at the University of Waterloo for a long time. But the incubation period has paid dividends.

She loves to work in colour, so her faculty advisors encouraged her to work in black and white. And they challenged the painter and printer at heart to work sculpturally.

Fretz had two pieces in the university’s 43rd annual senior undergraduate exhi-bition and came away with two awards and their accompanying cash prizes.

“Unveiling Misogyny” won the 2017 Mayor of Waterloo Award; the artwork will hang at city hall for the next year. The piece consists of three flowers painted sculpturally in white. For Fretz, this represents cut flowers that die. Women, like flowers, are thought of as fragile, but are full of meaning and sexuality, like Georgia O’Keefe’s monumental flowers.

The other piece, “Patriarchy,” is a light box with three large mason jars, each containing a Mennonite prayer covering or bonnet. Lit from beneath, they glow in the dark. As in Celtic spirituality, there is one for the young girl just baptized; one for the adult woman with her own household and garden; and one for the woman, now a widow or menopausal, no longer having children. But they each connect the woman’s meaning to men—baptized by men, married to men, no longer available to men—pointing at the basic patriarchy at work in the conservative Mennonite circles that are part of Fretz’s own heritage.

For this work, Fretz won the 2017 Elizabeth (Liz) Edwards Award.

As part of a celebration, Fretz invited a group of women to view the art and hear a short presentation about her art and practice on April 5, 2017.