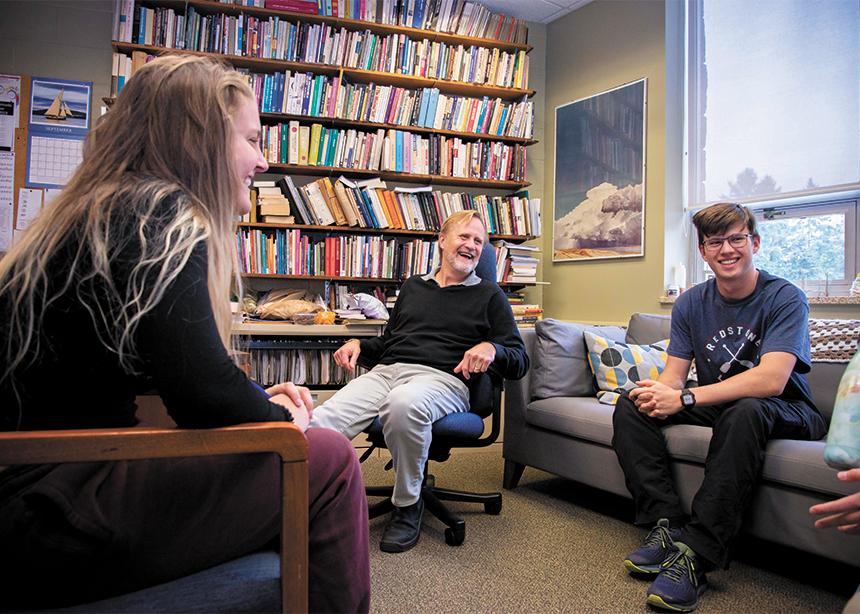 It’s obvious why he would want to serve as chaplain of Conrad Grebel University College in Waterloo, Ont., for 23 years. Janzen, who is retiring at the end of July from a job he loved, names several things that inspired his work.

He says his “most cherished responsibility” was to walk with young adults through what he calls both a thrilling and terrifying time of life, when big questions about identity, vocation, relationships and purpose persist. He says that “to be trusted with [the] vulnerability that came with those conversations” was the best way to express his ordination vows.

The role as Grebel’s chaplain, blending academic teaching with worship planning, community events and pastoral care was a “dream-of-a-lifetime” kind of job. He also taught courses, mostly in sociology, each fall and winter semester, and met regularly with a student committee to plan weekly chapels. He offered pastoral care for students, interviewed students for the residence and contributed to community events and celebrations.

Several events in his past seem to foreshadow his role as chaplain. On a family road trip when he was in Grade 4, he remembers his grandmother turning around and, in German, asking the children in the back of the station wagon, “So, who is going to be the preacher?” Janzen’s reply was “Oh, I will!”

In seminary, during a vocation conversation with his supervisor, Janzen stated, “I would like to retire from Conrad Grebel as a chaplain,” which was strange since he knew very little about the school at the time. Other signals pointed toward ministry, he says. As a young person he helped to run a church day camp, preached his first sermon and got involved in youth group leadership. He was a pastor for several years before coming to Grebel as chaplain.

But it was an experience in university that most profoundly shaped the chaplain he would become. Martin Sawatsky, a conference chaplain stationed in London, Ont., where Janzen attended university, hosted young adults in his home weekly for soup, Bible study and conversations “It was such a vital piece of learning for me . . . of becoming aware of my own faith and how necessary a community and a group of people are to sustain and support that faith's growth,” Janzen recalls.

It was a model he used in his own role as Grebel’s chaplain, where he met each week with a student chapel committee. Mostly following the lectionary readings for the church year, they began each meeting by reading the text together to “figure out where the Scripture is going to take us.” For him, worship begins in “a community read of Scripture.”

Janzen says, “I have a hard time getting anxious for the church when it comes to young adults.” Instead, he asks if older adults have relationships with younger people in the church. “Do they have a relationship with a young adult?” He says, if adults spend time with young adults, “you will discover a vital church.” Young adults “will help us find a way to discover what God wants to do next. . . . There will be a resilient movement.”

Instead of redesigning worship services in order to attract young adults, Janzen advises, “Spend more time thinking about who you can invite out for coffee.” Invite and nurture them into leadership responsibilities, he suggests, and then recognize and celebrate their successes. He calls it “sacred space” to be a witness to what young adults are doing and “to tell the story back to them of their past faithfulness.”

In his time as chaplain, Janzen has observed a greater openness to talk about mental-health challenges like anxiety and depression. He says there is no greater pastoral or professional satisfaction than to be able to “companion” young adults, as they “recognize that challenge is a necessary part of development” and figure out how to live with their limitations.

To sum up his work as chaplain, Janzen says, “More than anything it's about doing my part to build the family of God . . . doing what increases love in the world.”

He likes the quote, “God draws straight with crooked lines,” saying, “Grace is discovered through the crookedness of the path. If we would be part of this great project of love that is God’s cosmos, then best to understand that the distance between Point A and Point B is shortest if we follow the crooked line of love.”

He acknowledges that there were stresses and tensions in the job, and times when he could not always neatly manage his self-care, but in times like this he asks, “Can we give ourselves and trust that God will provide past our abilities, past our energy, past our own wisdom?”

Janzen is looking forward to spending more time woodworking, gardening and sailing, as he waits for what comes to him next. “Development transitions don’t stop after retirement,” he says. 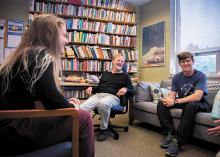 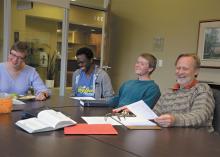 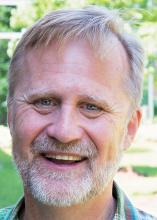