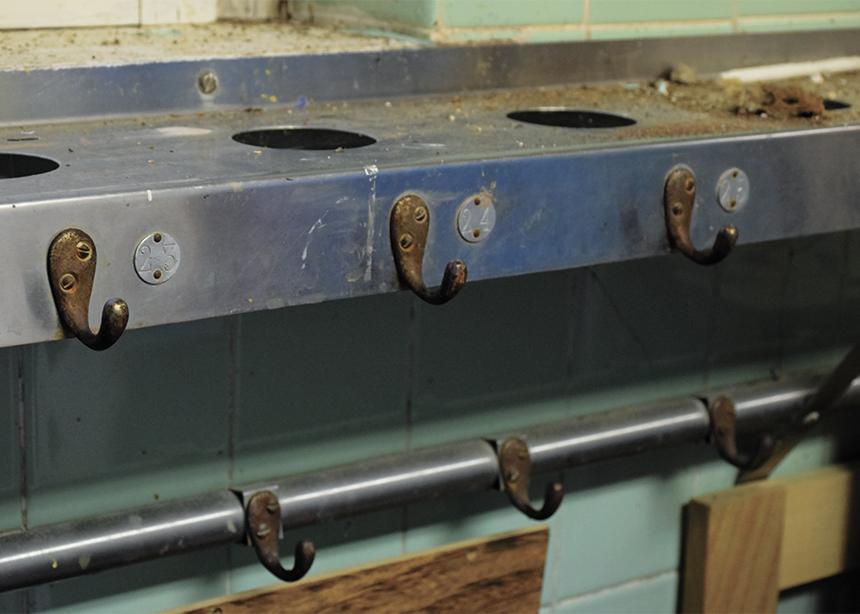 This is where the girls lined up to brush their teeth at the former Blue Quills Indian Residential School. Children were referred to by numbers, not by names. (Photo by Suzanne Gross)

At the end of May, the Tk’emlúps te Secwépemc Kukpi7 First Nation discovered the grave site of around 215 children at a former residential school in Kamloops, B.C. Like many people, Jim Shantz, former Indigenous Neighbours coordinator for Mennonite Central Committee (MCC) Alberta says, “It was shocking but not surprising.”

Shantz, who retired from MCC Alberta in 2020, says that his work with Indigenous people has been life changing—“almost like a learning tour that never ends.”

It began in 2004, when he attended an Edmonton social-justice event at which the speaker showed the participants a map. Having graduated with a degree in geography, Shantz always had a special interest in maps, but this map was different. “It was not the map itself, but what was behind the map,” he says. It showed the 139 federal-funded residential schools sprawled across Canada, with 25 being in Alberta. As he heard about the abuse that occurred in these schools—beatings, rape and even murder—it was a wake-up call to a history he never knew.

June is National Indigenous History Month, a time to honour the history, heritage and diversity of Indigenous people in Canada. Honouring the history means facing the truth of what has happened.

With regards to Indian Residential Schools, Shantz referenced Justice Murray Sinclair, who said that, although the Truth and Reconciliation Commission (TRC) documented the deaths of more than 6,000 students, the true figure is more likely to be over 25,000. The TRC had been told that 50 students died at the Kamloops Indian Residential School which has now proven to be under-estimated.

The building was formerly a residential school, one of the harsher ones, which the community requested to take over when it closed in 1970. After repeated cries, “Indian control of Indian education,” and a 21-day sit in, the federal Liberal government of the day released the school to seven First Nation bands: Beaver Lake, Cold Lake, Frog Lake, Whitefish Lake, Heart Lake, Kehewin, and Saddle Lake.

According to Shantz, 40 Mennonites have toured the former residential school. Inspiring was the story of a resilient community that chose to redeem the school rather than tear it down. The majority of the staff were once students there. One woman told how, as a child, she was forced to stand in a corner for a half-day for speaking Cree. Now she teaches at the university.

According to the university, “As an Indigenous non-profit educational institution, a prime objective . . . is to promote a sense of pride in Indigenous heritage and reclaim traditional knowledge and practices.”

Looking back over the years, one lesson that has stuck with Shantz is respect for the land, trees and animals. Now when considering decisions to be made on his land, he tries to look at it from an Indigenous perspective: When beavers are making a mess of the trees, should they be killed or let be? Is using a gas-powered lawn mower a faithful act?

Although he is retired, Shantz is still committed to walking with his Indigenous brothers and sisters. “We need to mourn with those who mourn,” he says. He has noticed that when people are confronted with Indigenous history, they tend to react angrily, with denial or guilt. The challenge is to be an ally, he says, to walk together with compassion and to advocate.

Shantz says that Mennonite Church Canada suggested wearing an orange shirt recently in solidarity with those who are grieving over the children who died in Kamloops. He wore it to Prairie Gardens, where his wife works. His shirt did come up in conversation, and he was grateful for the opportunity to share his experiences.

As for the church, he suggests that there is a lot to be learned from Indigenous spirituality. “We tend to focus on our vertical relationship with God,” he says. “The Indigenous remind us that the horizontal relationship is also important.”

A favourite quote he saw on a T-shirt at a Poundmaker Performance Festival reads, “See our places, hear our stories and celebrate our strengths.” Shantz encourages everyone to learn what they can about Indigenous history and to honour the TRC’s 94 Calls to Action as part of being a faithful disciple of Christ. 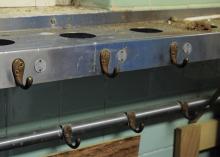 This is where the girls lined up to brush their teeth at the former Blue Quills Indian Residential School. Children were referred to by numbers, not by names. (Photo by Suzanne Gross) 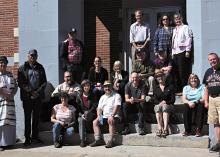 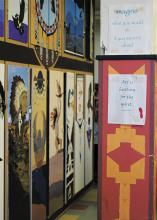 A look inside the University nuhelot’įne thaiyots’į nistameyimâkanak Blue Quills, formerly a residential school, during an MCC Alberta learning tour in 2018. (Photo by Suzanne Gross) 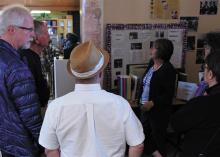