It takes three villages to send 18 kids to camp 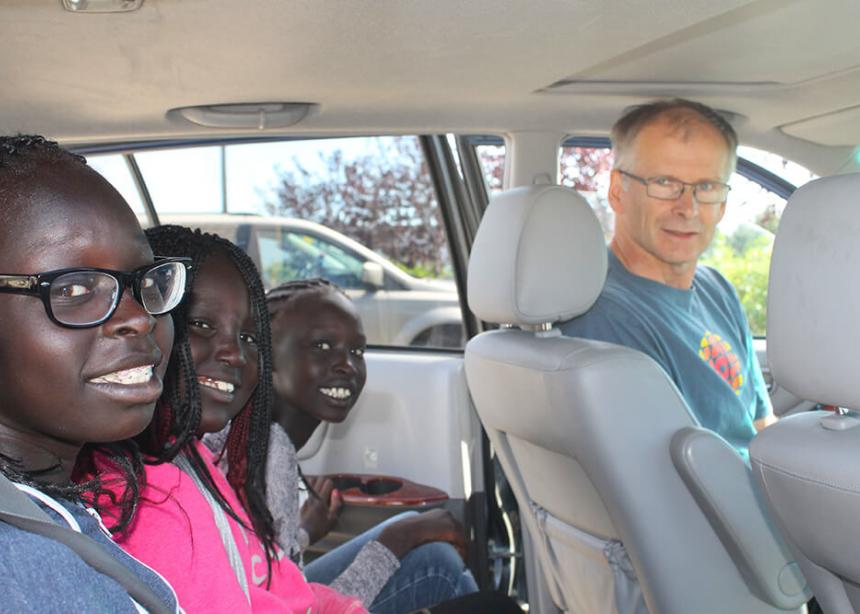 What does it look like when two churches and Camp Valaqua partner toward a common goal? It looks like 18 enthusiastic campers!

This past summer, the Service and Outreach branch of Edmonton’s First Mennonite Church learned that a number of young people from the city’s South Sudanese Mennonite Church were interested in going to Camp Valaqua in Water Valley, Alta., for the first time.

There were, however, a few significant obstacles to this dream, money being the most pressing; for the large Sudanese families, many of whom are new Canadians, sending multiple children to camp is financially prohibitive. Transportation to and from the camp, a seven-hour round trip, filling out registration forms and a lack of sleeping bags were also problems.

Service and Outreach decided to ask First Mennonite to consider donating towards the Sudanese campers. Chair Norman Sawatsky was surprised when more than $2,900 came in after one announcement, and then another $500 came from the church’s Women in Mission group.

“I honestly thought we would be limited by our budget and the [one] ask,” he said. “I thought we’d only be able to afford to send seven.”

Volunteer drivers stepped forward as needed, and vehicles and sleeping bags were loaned by church members. The Edmonton Mennonite Centre for Newcomers also loaned its sleeping bags to the campers. The money, combined with payments from parents of the campers and some from Camp Valaqua’s Campership Fund, was enough for 18 South Sudanese campers to attend a week of summer camp.

It wasn’t only the Sudanese campers who benefitted from the partnership. Interim camp directors Allison and Kevin Stoesz were excited to have the new campers at Valaqua. “The gift these campers brought was a more diverse group,” said Allison. “Our summer theme was ‘Hand in hand,’ which explored the topic of children and diversity. The South-Sudanese kids brought more to the conversation during chapels—differing experiences and points of view.”

She also said that a highlight of their summer was “being able to take both the South Sudanese and Liberian kids [from Holyrood Mennonite] on the hike during Teens Week. They were amazed at being able to hike actually in the mountains. They were blown away by the view, being so high up and looking back at where they had hiked from.”

Volunteers who drove vehicles full of Sudanese campers were impressed with their energy. Don Douglas’s passengers sang camp songs almost the whole way home from Valaqua, until they all fell asleep. “I was amazed how enthusiastically they sang even when they were tired,” he said.

When Sawatsky drove, the campers in his vehicle played a “video game” without any actual electronics. “One guy would talk about the game and set the scenario, and then they’d close their eyes [and imagine],” he said, impressed with how resourceful they were.

Teth Chuol, a 15-year-old from the South Sudanese church, said he was impressed by the quality of the counselling staff. “There is a passion and love for the campers,” he said. “It is a relationship-built camp, the staff really choose to be engaged with the games and also with worship. The staff are really helping the campers with their relationship to God.”

Teth wants to return to camp next summer, maybe as a volunteer counsellor-in-training.