‘It doesn’t feel so lonely anymore' 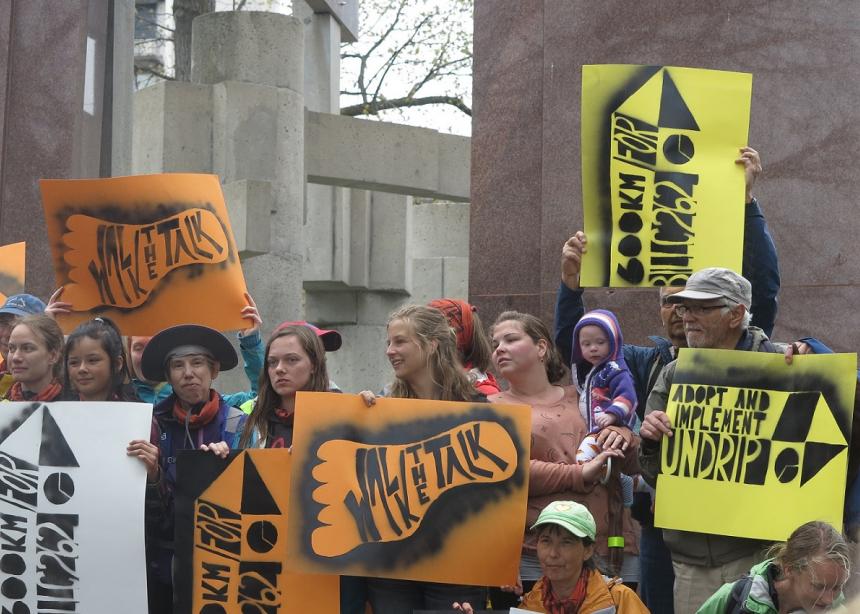 More than 30 walkers rallied together with indigenous leaders, government officials and a few hundred supporters to mark the completion of their 600-kilometre journey and to demand that the United Nations Declaration on the Rights of Indigenous Peoples (UNDRIP) be fully adopted and implemented by the federal government.

The pilgrimage began three weeks earlier in Kitchener, Ont., and was coordi-nated by Mennonite Church Canada and Christian Peacemaker Teams (CPT) in response to the Truth and Reconciliation Commission’s “94 Calls to Action,” focussing on the articles that name UNDRIP as “the framework for reconciliation” and point to faith groups as key players in historical wrongdoing and future transformation.

Walkers hailed from across the nation’s many treaty and traditional lands, including unceded and unsurrendered territories. Nearly 20 completed the entire journey, but innumerable others joined for parts of it, whether a few weeks, a few days or simply a few minutes. Eighteen different churches served as overnight hosts, with occasional nights at community halls and recreation centres. In their last week of pilgrimage, walkers spent a memorable evening with hosts at the Shabot Obaadjiwan First Nation near Arden.

At the final Ottawa rally, walkers stood in solidarity behind indigenous leaders like Sylvia McAdam and Myeengun Henry, their support for host peoples and Bill C-262 at the forefront. Bill C-262 is a private member’s bill sponsored by MP Romeo Saganash that would provide the necessary framework to ensure that all forthcoming Canadian laws comply with UNDRIP. Along with other parliamentary colleagues at the rally, Saganash insisted that the government keep its promise of a nation-to-nation relationship with all Indigenous Peoples in Canada.

Bill C-262 goes to its second reading in September, making the pilgrimage a timely opportunity for walkers to connect with an estimated 1,500 Canadians in churches and schools, and on the road.

Kathy Moorhead Thiessen, a member of CPT’s Indigenous Peoples Solidarity Project, described how “the message got out, over and over, through media that met us along the way, hundreds of people attending teach-ins in the evenings, and 50-plus walkers. [We] became a community spread out across Canada.”

The pilgrimage undoubtedly aimed to put a better political foot forward, but there was also spiritual significance in the embodiment of pilgrimage. Tamara Shantz, interim pastor with Pastors in Exile in Kitchener, spoke at the final Ottawa Mennonite Church teach-in, remarking, “The question, ‘What is the spirit of this place?’ was a powerful way for us to encounter land and space.”

Writing Scripture on human hearts is a common spiritual practice, but in an effort to increase familiarity with UNDRIP, walkers also challenged themselves to commit articles of the Declaration to memory. According to Steve Heinrichs, MC Canada’s director of indigenous relations, “We need to take as seriously the beauty of human rights as we do the beauty of the gospel.”

Shantz agreed that Christian perception and practice of the gospel needs to change. “Ours is a gospel of reconciliation,” she said. “Christ came to remove all barriers, and what a tragedy it is that the gospel has been used for violence and to create barriers instead. We need to reclaim our gospel.”

Despite the group’s predominantly Christian settler origins, Moorhead Thiessen said that indigenous voices were present in “the discernment circle that guided us preceding the pilgrimage and the indigenous people who walked with us and met us along the way. They told us that seeing so many church people ‘walking the talk’ gave them hope that change was possible.”

One of these indigenous walkers was activist Leah Gazan, a member of Wood Mountain Lakota Nation and an instructor at the University of Winnipeg. She quickly became integral to the pilgrimage, with her warm friendship, penchant for live-feed videography and ardent support for Bill C-262.

Gazan hosted the final Ottawa rally and echoed the gratitude felt by many. “I’m getting tired, so thank you for sharing the load,” she told the walkers. “It doesn’t feel so lonely anymore.”

Already, solidarity walks are taking place in Mennonite communities across area churches, and Heinrichs enthusiastically reported that, although the walkers are tired, “they aren’t burnt out!” There are already plans underway to meet with local politicians and dreams of future pilgrimage routes being mapped out.

Moorhead Thiessen agreed that this was only a starting point. “We do not have huge expectations that our pilgrimage will be the tipping point,” she admitted. “But we do know that our 600 kilometres of hard work, sore muscles and exhaustion have inspired others to walk the talk as well.”

Ally Siebert lives in Ottawa and is a member of the Canadian Mennonite Publishing Service Board of Directors.

To learn more about the Pilgrimage for Indigenous Rights, visit pfir.ca.

To read stories of people who participated in the Pilgrimage see:
Drummer joins pilgrimage to bring awareness of indigenous rights
A personal pilgrimage
'Land rights apply to my church and my home’ 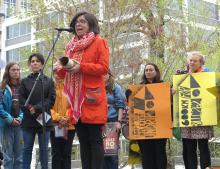 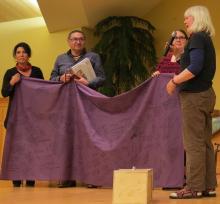