It’s all about trust 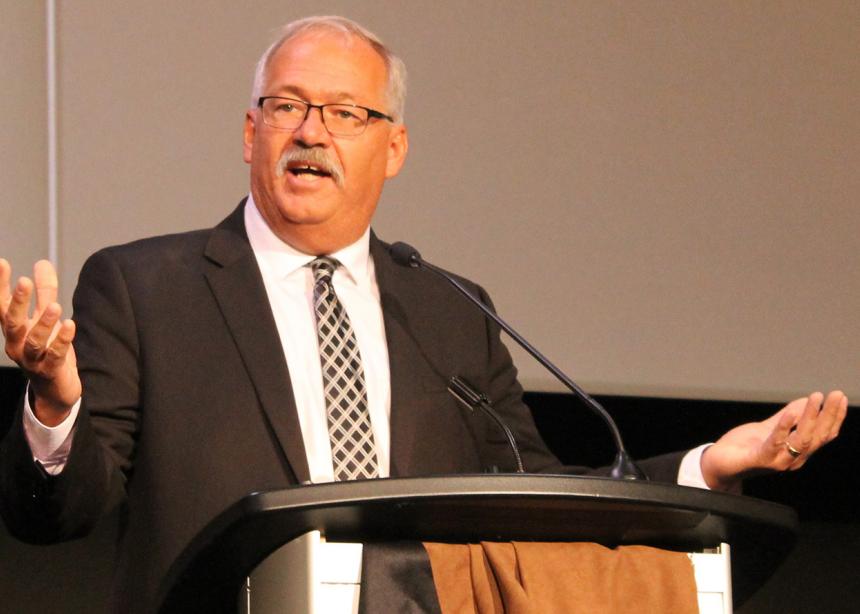 “What are the dreams that have been placed in us? What has God whispered in our ears? How has God invaded our thoughts?” asked Willard Metzger, Mennonite Canada’s executive minister (formerly executive director). Thus began his final address on Oct. 15 to those who gathered for Special Assembly 2017.

Those questions arose from the assembly’s theme text, II Corinthians 3:1-6, that were pondered throughout worship sessions on the two previous days. During the final worship service, Metzger took the text further and explored the bold confidence displayed by the Apostle Paul in the face of challenge.

“The Apostle Paul was facing a pretty serious threat,” he said. “False teachers had infiltrated the congregation and gone out of their way to discredit Paul.” They called him a false teacher, but Paul’s response offered an unconventional understanding of how God works, by displaying a “bold, crisp, shameless confidence” against their accusations. Paul had greater confidence in the testimony of the Corinthian congregation than anything his accusers offered against him.

To be in fearful anxiety of getting it right is actually doubt in God, Metzger said, relaying an experience from his own life. As a young man, he was fearful about making a wrong decision regarding two ministry options. Although he prayed and waited, no clarity came. He grew anxious about making the wrong decision. A friend offered this counsel: “I think you have sought God, so now you make a choice and trust that God is leading you.”

“But how do I know if I am getting it right?” Metzger countered.

“Trust that God will stop you if you’re getting it wrong,” was the response.

Discernment is not as much about the ability to get it right as it is about trusting God’s ability to direct Christians. Metzger pointed to Proverbs 3:5-6: “Trust in the Lord with all your heart and lean not on your own understanding; in all your ways acknowledge God and God will direct your paths.”

In the midst of a changing environment, shifting structures and theological differences, Metzger invited church leaders and congregants to embrace the confidence that is theirs as the people of God. “God’s yearning for redemption and restoration will prevail when the people of God humble themselves and seek God in worship and prayer. God will respond. That’s our confidence,” he said. “This is about the ability of the Spirit of Christ to bring to life the words that have been inscribed in our hearts.”

To read more about worship at Special Assembly 2017, see “What is the Spirit writing on our hearts?”