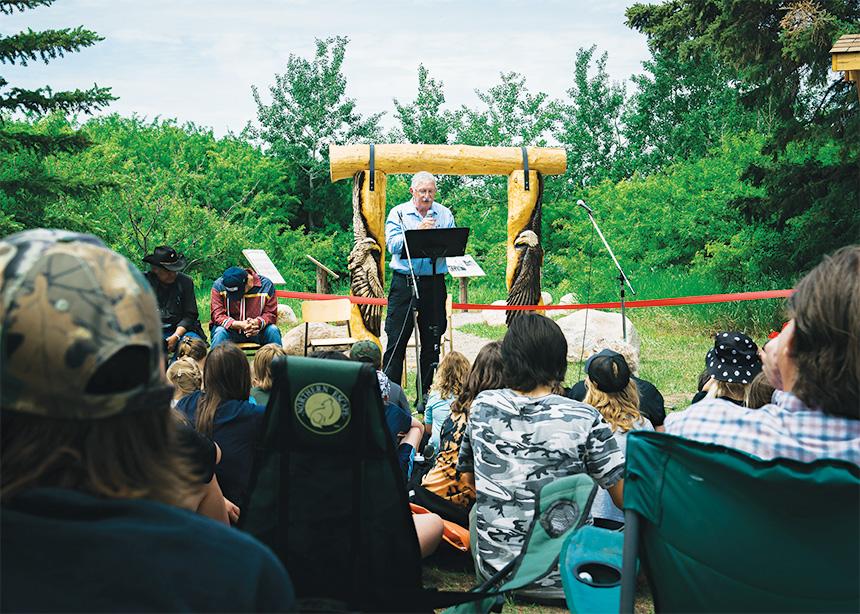 Leonard Doell shares a few words at the event. (Photo by Emily Summach)

An area of disputed land in Saskatchewan has become a seedbed of reconciliation with the launch of an interpretive path to make the story of that journey come alive for visitors.

An official opening ceremony for the Stoney Knoll Interpretive Site, located between Waldheim and Rosthern roughly 45 minutes north of Saskatoon, was held on June 22. More than 150 adult guests, plus several classes of students from area schools, attended the event that was put on by the Stoney Knoll Historical Committee, a group of Mennonite, Lutheran and Indigenous representatives who are dedicated to sharing this reconciliation story.

Over time, the settlers established themselves on the land, and St. John’s Lutheran Church, now located in Laird, Sask., was built on Stoney Knoll.

Beginning in the late 1970s, descendants of the first nation returned to the area and began having conversations with local landowners about the true history of the land sale. People from the area recall those days as “tense,” with “lots of fear, and heightened anxiety.”

Now, 40 years on, a friendship has grown and deepened between the local Lutheran and Mennonite communities and the Young Chippewayan Cree band, brought together on that land.

At the opening of the interpretive path there were smiles and hugs, and jokes shared between friends over plates of hamburgers and potato salad.

Wilmer Froese, a member of the Historical Committee, whose farmyard is visible from the knoll, joyfully told the crowd, “Instead of walls, we built bridges.”

Leonard Doell, another committee member, described Stoney Knoll as, “A thin place, where all of us are closer to the Creator. This place jolted many of us out of our old ways of seeing the world, and the storyboards unveiled today amplify that message.”

The landscaped path features an archway entrance that depicts two eagles, carved by local chainsaw artist Michelle Thevenot. Along the path are signs that tell the history of the land, the conflict, and the peaceful relationship that was forged between the groups. There is also a stone gathering circle next to the path to invite people to pray and reflect.

Students from schools in both Laird and Rosthern attended the event, and shared songs, poetry and artwork inspired by the reconciliation efforts centred at Stoney Knoll.

Both Indigenous and settler leaders spoke about how encouraging it was to them personally to have the students present, because it meant that things were changing and the next generation would have a better understanding of the history and impacts of colonization.

“This is a little start,” said George Kingfisher, ancestral chief of the Young Chippewayan band. “The government wanted us to be enemies, but we’re living peacefully.”

The Young Chippewayan Cree band submitted its land claim to the federal government in February. The review process typically takes six months, at which point the land claim can be accepted or rejected by the government. The Stoney Knoll Historical Committee intends to seek recognition for Stoney Knoll as a provincial or national historic site in the future.

For those closely involved with the project, the path speaks not only to the past, but also towards a hopeful future together.

Gary LaPlante, a Young Chippewayan descendent, said: “We [the Young Chippewayan People] took a big chance coming back here. We have no regrets. What we did here, it gives me hope. We actually achieved reconciliation.” 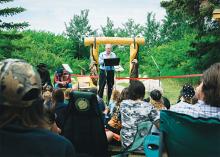 Leonard Doell shares a few words at the event. (Photo by Emily Summach) 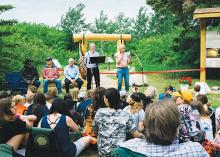 Wilmer and Barb Froese serve as masters of ceremony during the program. (Photo by Emily Summach) 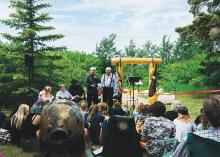 George Kingfisher, Young Chippewayan ancestral chief, and Ray Funk describe each other as ‘like a brother.’ (Photo by Emily Summach) 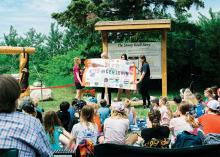 Students from Rosthern Community School in Rosthern, Sask. hold up a collaborative art “quilt” they made for the event. (Photo by Emily Summach) 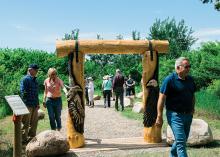 Guests examine the chainsaw-carved archway that serves as the entrance to the interpretive path. (Photo by Emily Summach) 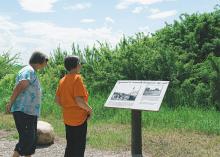 Visitors pause to read a storyboard along the interpretive path. (Photo by Emily Summach) 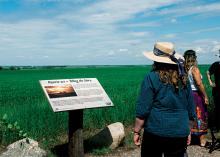 Theresa Driedeger examines a storyboard and the views of the land from the top of Stoney Knoll. (Photo by Emily Summach) 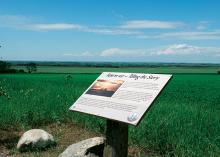 The final storyboard on the path overlooks the land surrounding Stoney Knoll. (Photo by Emily Summach) 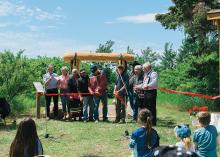 Members of the Stoney Knoll Historical Committee and special guests cut the ribbon to open the new interpretive path. (Photo by Emily Summach)

I have been “lurking” around the outer edges, conversationally, with a variety of some of the active “movers and players” of this incredible often furtive beginnings of journey toward reconciliation. In the midst of perceptions, misperceptions, deeds and misdeeds, along with occasional unexpected joyful revelations of shared comprehensions &/or visions triggering embryonic intrepid forays into relational territories not yet encountered or visited.

Now, having been disconnected from active conversations, and geographically distant residency, these many years later, I am heartened to learn that what may have been tenuously held as a dream, in the 1980’s, (when I was somehow temporarily “present” and “privileged” to hear from folks closer to the immediate action), has borne excellent fruit, in some respects, making way for more planting of seeds of hope, peace and even joy, for future generations, both those of long ago, with ancestors born on the land, and relative newcomers, having arrived more recently.

Long time coming - as measured in human life spans - hardly a blink in terms of creation and history.