Interdependency at the heart of MWC vision 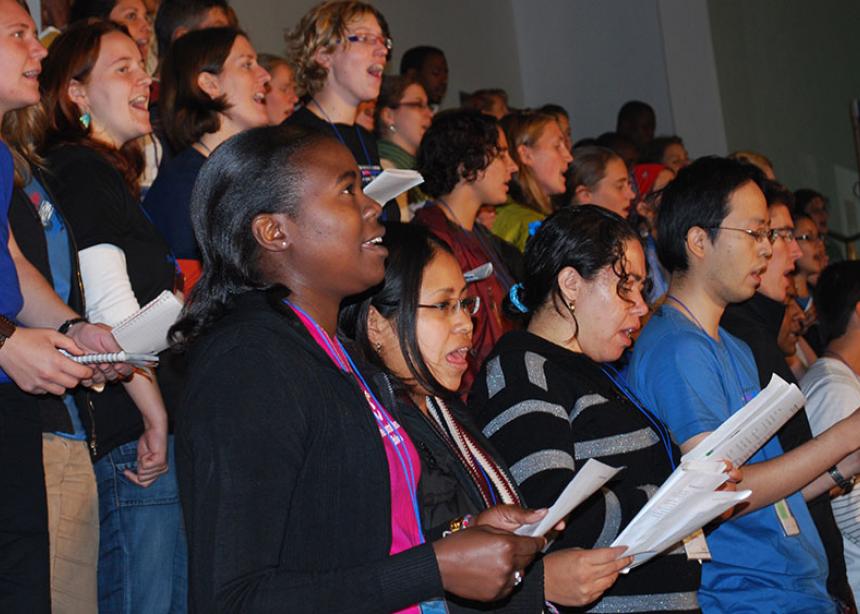 <p>Mennonite World Conference brings together Mennonites from all over the world. (Photo by Merle Good)</p>

One minute César García is talking with awe about a postmodern work of art in a thriving Amsterdam Mennonite church, and the next he’s speaking with similar awe about a Mennonite service in rural Malawi where the congregation has little more than a tree to meet under, a make-shift drum and the joy of the Lord.

García, 43, is into his fourth year as general secretary of Mennonite World Conference (MWC). He has a unique and deeply thoughtful grasp of the unfathomably diverse groups that make up the global Anabaptist family.

Speaking by Skype from MWC headquarters in Bogotá, Colombia—his home city—García says he spends about 60 percent of his time travelling. He has visited 26 countries in this and previous roles. Clearly, he has a good feel for the global Anabaptist reality.

Most of us don’t.

We may have nuggets of international Mennonite experience, and conceptually value being part of a global faith family, but to us, Mennonites abroad are not unlike cousins we met briefly a long time ago—we know we’re connected but we don’t really feel it.

A few among us will go to the MWC Assembly in Pennsylvania this summer—and will undoubtedly be enthused—but the reality is that most of us won’t be there. Any enthusiasm we experience will be vicarious or perhaps mediated by an electronic device.

How do we as a world-wide community foster connectedness, across 103 national conferences of churches, from persecuted Mennonites in Vietnam, Eritrea and India to Amish farmers in Ohio?

García says he sees a gradual increase in the value Mennonites place in being part of a global family. Those who are suffering, he says, have a greater sensed need for global community than those who are self-sufficient.

That touches two key themes for MWC: interdependency and the north-south dynamic. Roughly speaking, 80 percent of MWC membership is in the global south and 80 percent of the financial wealth is in the north, says Arli Klassen who serves as Chief Development Officer for MWC. The disparity is an inescapable and awkward fact.

Klassen says the small increase in MWC budget for 2015 over the year before—from $877,000 to $880,000 (not including costs of the Assembly)—can be attributed to increased giving from the south, though the bulk of financial contributions still come from the north.

The move of MWC headquarters from France to Bogotá when García took over as General Secretary helped balance the north-south relationship. Now, nearly half of the paid staff positions are based in Colombia, not counting the 10 volunteer part-time staff in different parts of the world. As for participation in the upcoming global Assembly, of the 4,575 registrants (as of April 29), 63 percent are from the north and 37 percent from the south.

The MWC vision is one of interdependency among churches. García uses the term liberally, applying it to the three elements of church mission he also returns to regularly: church planting, social development and peacemaking. Interdependency can look like missionaries from the south, linkages among the more than 100 Mennonite-related healthcare institutions, student exchanges and the like. Part of the idea is to move beyond paternalistic and imbalanced relations.

By necessity, the focus of MWC is broader than the financial woes and single-issue shadow that tends to hang over conference matters in Canada. That broader perspective is refreshing.

When asked about experiences he has had with MWC that he would like northern Anabaptists to share, García talks about the unique worship experience in South Korea, the service under the tree in Malawi and a service in Congo following which the church lunch consisted of him and the pastors and sharing a plate of peanuts and then him being offered a plate of sardines and a Coke, with no food for the rest of the gathered members.

For him, these experiences have been transformative. “They challenge your life,” he says. The implicit challenge for us is to find the opportunities for interdependency and authentic exchange with our cousins around the world.

“MWC: a respite in a troubled world”

“Mennonite Christians are unique” (the first in a five-part series leading up to the Mennonite World Conference Assembly, July 21-26, 2015)

Mennonite World Conference brings together Mennonites from all over the world. (Photo by Merle Good)