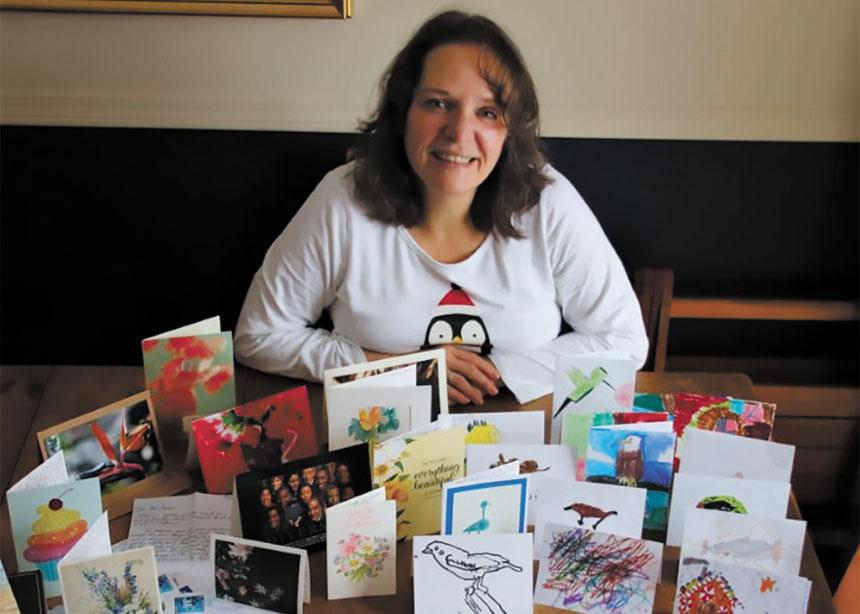 Angelika Dawson of Abbotsford, B.C., has been corresponding by mail with some members of her church during the pandemic. She is surrounded by some of the many cards and letters she has received. (Photo courtesy of Angelika Dawson)

In this time of isolation, some members of Abbotsford’s Emmanuel Mennonite Church are discovering the delights of a relationship based on the old-fashioned medium of handwritten letters.

At the beginning of the COVID-19 lockdown last March, Angelika Dawson began thinking of ways she could encourage people. As a writer, she recalled that, even as a young girl, she liked to send letters to a pen pal, her grandfather in Winnipeg, and her counsellors and fellow campers from summer camp. Later, as a counsellor at Camp Squeah in Hope, B.C., she became known for leaving encouraging notes to fellow staff, and when camp was done she wrote to girls from her cabin.

Dawson wondered how she could keep up relationships with church members when they were not gathering regularly. “It occurred to me that I could marry these two things: my love for letter writing and knowing that people appreciate encouragement,” she says.

She began with seniors in the church, members of her fellowship group, families with children, and later youths and young adults—resulting in regular correspondence with a few people—and a couple of surprises along the way.

“What I’ve learned in this process is this: Don’t make assumptions!” she says. “I was assuming that the seniors in our church would somehow be moved by the sheer nostalgia of receiving a letter in the mail and would write me back. I also assumed that the youth/young adults/families would either not write back or would use other means to respond.”

As it turns out, though, she says she discovered that “it’s the young people and families who have sent back handwritten letters, and the seniors who have either phoned, texted, emailed or messaged me on Facebook to say thank you!”

Even though Dawson sends three to four letters a week and might get half that number in return, she says it’s not about hearing back from recipients. “It’s about the process itself, knowing that I am offering encouragement to someone in a way that is meaningful.”

One of the oldest members of the church has sent Dawson letters filled with family history and his reflections on life. “As someone in his 90s, he’s got lots of life to reflect upon and it’s been wonderful to correspond with him,” she says.

She has particularly enjoyed corres­ponding with the McCrimmon family of Chilliwack, B.C., who have four boys ranging in age from three to 10. She sends them photo cards, and the boys take turns sending her pictures they’ve drawn, along with letters of family news penned by mom Amanda.

“I’ve learned so much about this family and have truly come to love and appreciate them through this process,” Dawson says.

The McCrimmons, meanwhile, treasure the letter-writing relationship just as much. Amanda McCrimmon says that letters go back and forth every two to three weeks, and her children eagerly look forward to hearing from Dawson. They recognize her stationery and handwriting by now, and when a letter comes, McCrimmon says, “It’s probably the most exciting day of the week. The boys will say, ‘Mommy, we have to read it right now,’ and we promptly sit down and read it together.”

With email having eclipsed regular mail for the most part, Dawson says she has come to appreciate the deliberate nature of letter writing: selecting stationery, composing sentences longhand when backspacing or deleting are not possible, addressing an envelope with a stamp instead of just hitting “send.”

“I think what makes handwritten letters so special is exactly that: the receiver of it realizes you’ve taken significant time to do this thing, to think of them, picture them as you’re writing,” says Dawson. “I know that when I receive a letter it’s the highlight of my day and I savour the reading of each one. It’s something that I hope will continue even after the pandemic is done.”

This article appears in the March 1, 2021 print issue, with the headline “Instead of just hitting ‘Send.’” Do you have a story idea about Mennonites in B.C.? Send it to Amy Rinner Waddell at bc@canadianmennonite.org. 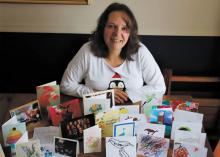 Angelika Dawson of Abbotsford, B.C., has been corresponding by mail with some members of her church during the pandemic. She is surrounded by some of the many cards and letters she has received. (Photo courtesy of Angelika Dawson)