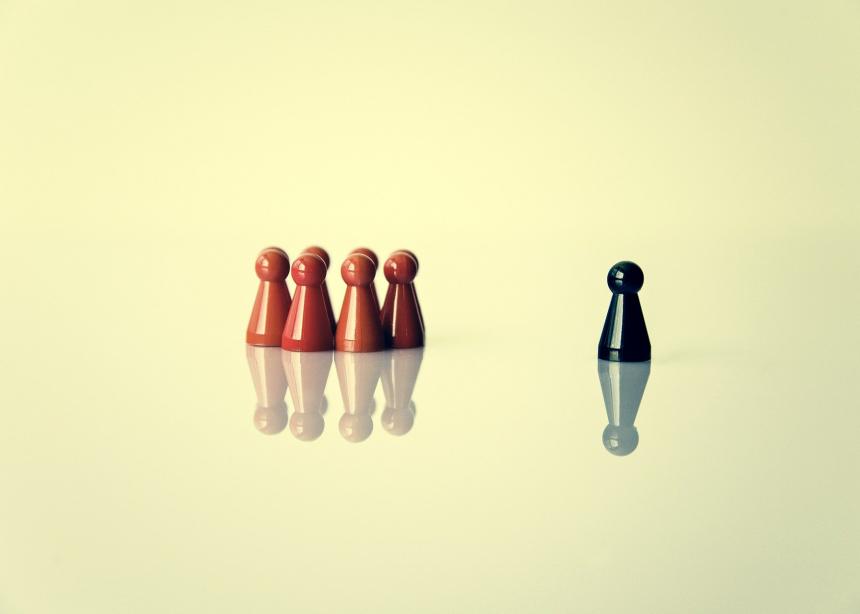 “Teacher,” said John, “we saw someone driving out demons in your name and we told him to stop, because he was not one of us” (Mark 9:38, NIV). John’s exclusionary attitude remains a prevalent attitude in our churches: “You are not one of us!”

Sometimes churches boldly outline the boundaries of membership in their policy documents. So the Baptist church where I pastored required my wife to be baptized by immersion to become a member because her earlier faith-based baptism had been by pouring. Sometimes individuals judge others by their assumed beliefs, ethics or practices. So a man left the Mennonite church I pastored when he heard, via gossip, that I did not hold to a literal seven-day creation.

We become exclusionary when we create or adopt boundaries that allow us to determine who is one of us and who is not. Always we assume we are part of the “in” group, which means those different from us—as determined by us—are “out.” We are comforted by being an insider and rarely challenge our assumptions that judge others as outsiders.

John and the disciples believed they were “in” because they remained physically with Jesus. The healer casting out demons in the name of Jesus was, therefore, “out.” Ironically, the insider disciples had earlier been unable to do in Jesus’ authority what this outsider healer was doing. So who truly was “out”? So where should we set the boundaries when it comes to the Kingdom of God?

The more conservative within our Mennonite church family tend to set the boundaries tighter and clearer. The more liberal are comfortable with broad and often indistinct boundaries. What we hold in common is that we all have boundaries separating insiders from outsiders, and we all think we are part of the insider group. The problem, of course, is that we too quickly move from drawing boundary lines to condemning those who fall outside our lines.

Jesus tried to turn the disciples’ thinking inside out and outside in. Jesus replied to John and the other disciples: “Do not stop him. . . . For no one who does a miracle in my name can in the next moment say anything bad about me, for whoever is not against us is for us” (Mark 9:39-40, NIV). The disciples considered all who were not with them as outsiders, while Jesus considered all who were not against him as insiders.

According to Jesus, insiders in God’s kingdom are not determined by whether or not they align with our beliefs or thinking or practices, but whether or not they align themselves with Jesus. The most faithful church-goer may be more concerned with his/her agenda instead of following the ways of God. On the other hand, someone far from the church may be turning continually to God in the hope of redemption.

To the former, Jesus says, “Away from me. I never knew you.” To the latter, he says, “Welcome to the kingdom. Blessed are you.”

Ken Dueck is an “oldie” to Mennonite faith and pastoring but a “newbie” to MC Canada. He is currently MC British Columbia’s interim communications coordinator.

Read more From Our Leaders columns:
Expert, doubt thyself
Reaping what you sow
Faith is so much more
It's been a feast!
Practising prayer with the Psalms