Injera: a symbol of community 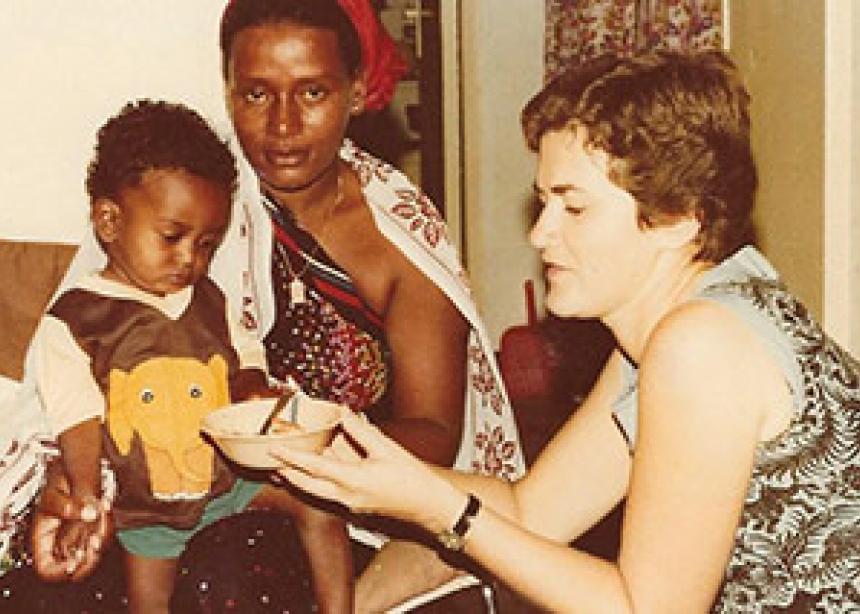 There is no other food from our years in Africa that symbolizes community quite like injera, a type of flatbread.

The most authentic way to serve it is on a large shared platter with family or guests gathered around the table or on the floor. Various sauces are served on layers of injera and each person is given a few pieces of injera from which to tear bite-sized pieces for enfolding around a small amount of stew, which is then eaten by hand. The last part of the meal is the most tasty, when the sauce-saturated injera from the shared serving platter is scooped up by hand and enjoyed. There are so many times we have enjoyed hospitality around a shared feast of injera, both in Africa and here in Canada.

I was first introduced to injera when we moved with our two-year-old son in 1981 to Somalia, where my husband and I had accepted a shared position as Mennonite Central Committee (MCC) country representatives. Fouzia, who worked in our home, sometimes served injera when we had MCCers staying in the adjoining guesthouse. She also taught me how to make it.

The recipe from Extending the Table, although described as Ethiopian, is close to the taste of Somali injera. It is often eaten with maraq, a stew most frequently made from camel meat, which is soft and delicious when prepared in a pressure cooker with tomatoes, potatoes and other vegetables. Fouzia would entice our two-year-old to eat it by making a special version for him by adding ears and eyes to his pancake-like injera. Later, when visiting Ethiopia, we were introduced to a darker injera made with teff flour, served with accompanying stews and sauces that are spicier in flavour than in Somalia.

After returning to Canada, we sought out injera dishes in Eritrean and Ethiopian restaurants and cafés in Winnipeg, and Kitchener-Waterloo, Ont., where we lived. I have also continued to make injera in my own kitchen, but more recently I started buying it after finding a good source for it and learning that many Ethiopian and Eritrean women also buy theirs.

A year ago, I joined others from my church, Erb Street Mennonite in Waterloo, as part of a sponsoring committee to assist an Eritrean woman and her grandson relocate to Kitchener-Waterloo from another community. What a joy it was to share Eritrean food as we got to know our new friends!

A favourite memory involves sharing food right after several people from our church helped our new friends move into their new apartment. There we were, about a dozen people, many who hadn’t met before, and some not sharing the same language, enjoying a feast of injera and sauces. The food was provided by Eritrean women who wanted to say thank you to the movers. It was just one more example of experiencing community over injera!V

Visit canadianmennonite.org/injera-maraq for recipes from Extending the Table.