Indigenous and settler history along the Grand River 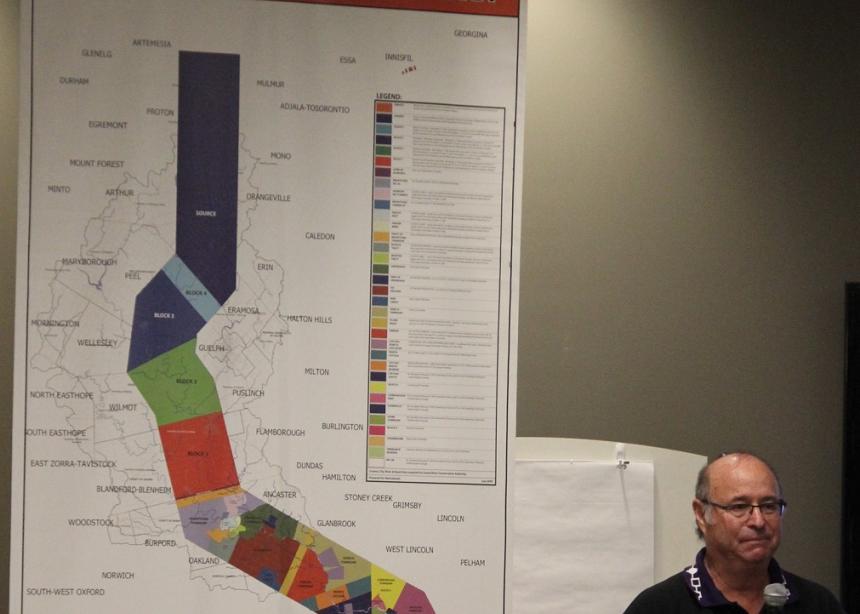 Phil Monture, Six Nations land claims researcher, speaks at 50 Kent Avenue in Kitchener, Ont., on Oct. 26, about the Haldimand Tract that was promised to Six Nations in the late 1700s. (Photo by Dave Rogalsky)

The community room at 50 Kent Ave. in Kitchener had standing room only on Oct. 26, with more than 180 adults of all ages there to listen to Phil Monture.

Monture, a Mohawk from Six Nations of the Grand River in southwestern Ontario, has spent the last four decades researching in public and private archives just what has happened to land given to the Indigenous community and the monies realized by those lands.

Six miles (10 kilometres) on either side of the Grand River, from its source to its mouth on Lake Erie, the Haldimand Tract was given to Six Nations for siding with the British during the American Revolutionary War. Having to leave the United States after the Revolution, the British gave them land that had once belonged to the Neutral Tribe, which had been decimated by illnesses that the British and French inadvertently brought to North America.

But the northern reaches of the Tract were not surveyed to give to Six Nations, so it never received the whole 111,000 hectares. Put under the guardianship of a series of Indian agents, parts of the land were leased for 999 years, with the stipulation that regular payments be made to Six Nations. Those leases were turned into full ownership without Six Nations’ knowledge or permission, robbing it of that income, Monture explained.

McGill University in Montreal received $8,000 in 1847. With compound interest, this would be worth more than $65 billion today, he calculated. Monture spent time on this example since Six Nations does not have enough money to send all of its youth to university or college. Indigenous leaders have approached McGill about the money and making room for students, but to no avail, he said.

According to Monture, all these claims are agreed to by the federal government, but nothing is happening. “The amounts are too big,” he said.

Six Nations sees itself held to several treaties. The “One Spoon” treaty binds it with the other Indigenous nations in southern Ontario and Quebec. With only one spoon to eat, the tribes must share the proceeds of the lands. The other treaty is the “Two strip wampum.” Made of parallel blue strips of wampum, separated and edged by white shells, this treaty binds Six Nations, the British and their settlers to travel side by side, sharing the lands, each living according to their own laws, but not disturbing the others in their living by their laws.

In response to the oft-cited “handouts” that Six Nations receive, he compared the $200 million in excises taxes paid yearly by Grand River Enterprises Six Nations Ltd., which manufactures and sells cigarettes, with the upwards of $14 million a year in government grants to Six Nations.

Monture repeatedly praised the crowd at the meeting, which was jointly sponsored by the Mennonite Story information centre in St. Jacobs and Mennonite Central Committee Ontario’s Indigenous Neighbours Program, “for being here.” When he began this work, he said the meetings would draw only two or three.

“What keeps you going? What gives you hope?” he was asked. He replied that large settler responses, as was the case on Oct. 26, help, as well as “the children” on whose lands these meetings take place. 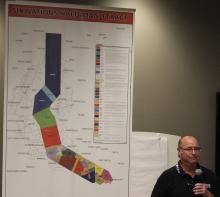 Phil Monture, Six Nations land claims researcher, speaks at 50 Kent Avenue in Kitchener, Ont., on Oct. 26, about the Haldimand Tract that was promised to Six Nations in the late 1700s. (Photo by Dave Rogalsky)

Hello,
The two most significant trails in this area are the Iroquois Trail and the Trail of the Black Walnut. Would turning some of the land, along the Grand River and the Niagara escarpment. into two trails, make a possible two way meeting for two kinds of pilgrimage to better understanding? Would this be a church, educational or government kind of project?
James Neufeld, Winnipeg