Imitating Jesus on the Migrant Trail 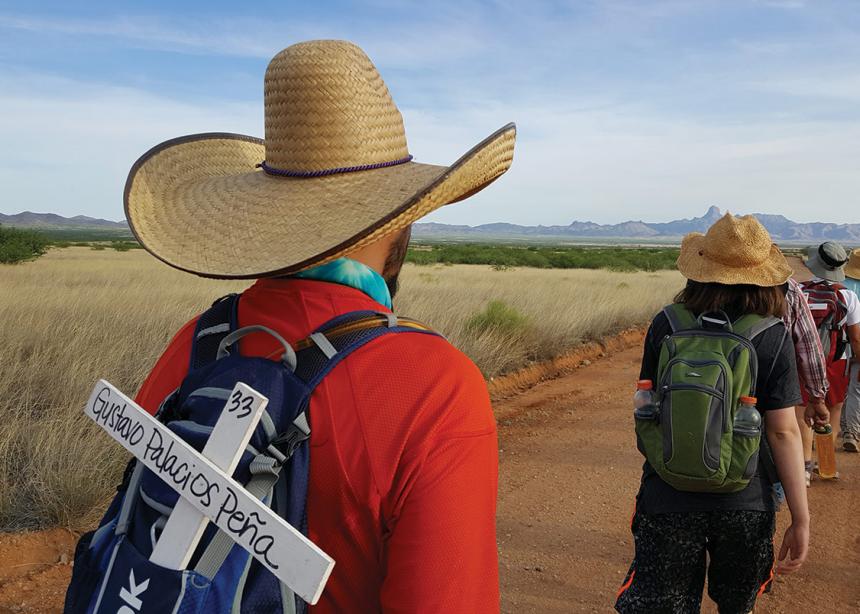 “Our Anabaptist history is intrinsically tied to migration, and so is our Christian story,” says Saulo Padilla, immigration education coordinator for Mennonite Central Committee (MCC) U.S. “We must keep challenging the narratives that separate us, build borders and invite us to dehumanize others.”

Several Anabaptist-Mennonites participated in the 14th Migrant Trail Walk from May 29 to June 4, a 121-kilometre solidarity hike from Sasabe, Sonora, Mexico, to Tucson, Ariz., that mirrors the paths migrants travel to cross the border. Some seven thousand people have died en route, a thousand of whom have never been identified.

“[This pilgrimage] allows us to honour those lives and to accompany the families that were not able to give a proper burial to their loved ones,” says Padilla. “As Anabaptists and Christians, we believe that every person is created in the image of God and deserves to be respected.”

Why they walk
For seven days, some 50 participants walked up to 25 kilometres a day, eating meals provided by volunteer supporters and sleeping outside. Support vehicles provided water and logistical support, and carried supplies.

Seven-time participant Padilla’s commitment to the walk comes in part from personal experience as an immigrant. Born in Guatemala, he lived as a political refugee in Mexico before immigrating to Canada in 1986.

He invokes Hebrews 13:1’s invitation to entertain strangers. “This kind of hospitality has slowly been blurred by the narratives in society about how dangerous it is to welcome strangers,” he says. “Yet, we should continue to welcome strangers as if God was always knocking at the door. Wouldn’t we treat each other very different if anyone could be God?”

“As Mennonite Brethren, we work for justice,” says David Bonilla (pictured above left), who works with MCC partner Cafe Justo’s migration programs in Mexico. He joined the walk to support vulnerable people. “Jesus taught us this. We are imitators of Jesus.”

Jonathan Ziegler, a member of Circle of Hope, a Brethren in Christ congregation in Philadelphia, Pa., was drawn to walk the Migrant Trail because, as an Anabaptist, he says nation states and borders are “inherently violent. I believe in radical peace that undoes the oppression they cause.”

For Sara Ritchie-Helmuth, MCC’s Connecting Peoples coordinator in Guatemala, the walk was part of a larger journey, from learning about “the American Dream” as history to meeting people who chase the dream today. “I understood why migrants leave their country and what they experience once they reach the so-called Promised Land, but I wanted to understand what happens in between,” she says. “However, I will never fully understand those struggles because I will never be able to abandon the privilege that has been assigned to me.”

Lessons on the road
Ziegler says “the waste of money on the border patrol” frustrated him, but by maintaining a friendly and respectful relationship with the officers, he began to consider police in his city. “How do we stand up to the powers while loving our enemies [at home] in a way that might just transform them?”

“God was present in glimpses and grandiose moments” through her fellow walkers and the landscape, says Ritchie-Helmuth. Like a simple flower she discovered growing in the desert, she says, “God’s goodness extends to unlikely, desolate and harsh places. Sometimes, it’s just a little harder to find.”