An idea worth sharing 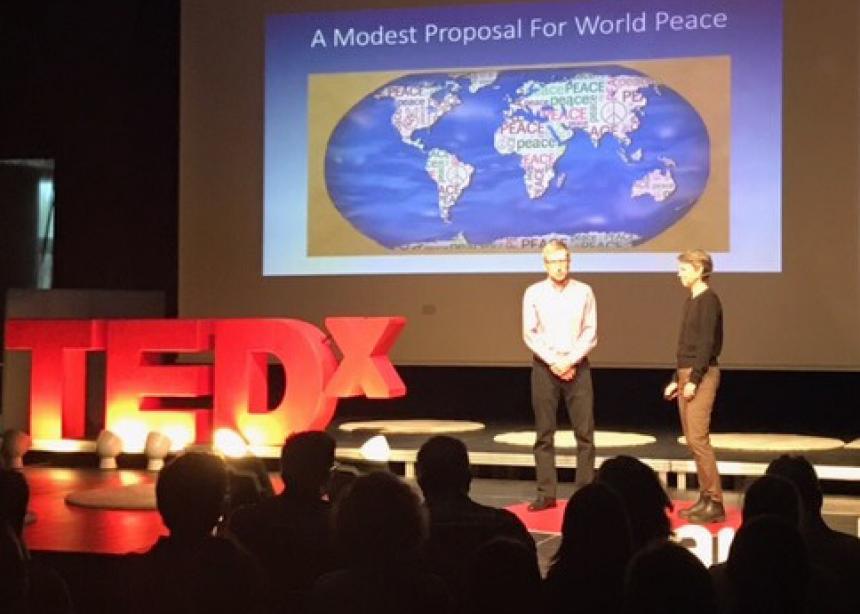 Peace is rooted in building relationships, and that means creating space to get to know one another. With that thought in mind, Karl and Marla Langelotz of Winnipeg addressed an audience at Zurich International School in Switzerland on March 18, 2017, for a TEDx talk they entitled “A modest proposal for world peace.”

TEDx is a localized version of the popular TED Talk conferences whose mission is sharing “ideas worth spreading.”

“Once we have known and are truly known by someone,” Karl told the audience, “it is impossible to create an ‘other.’ There is only ‘we.’ I know it sounds clichéd, but this is actually pretty deep. Only by creating an ‘other’ are we able to hurt, kill and exclude. How can we hurt ‘we’ without hurting ‘me’?”

The Langelotzes drew from their experience as Mennonite Church Canada short-term workers connecting with refugees at Friedenshaus (Peace House) in Ludwigshafen, Germany. While Canada welcomed 40,000 refugees between November 2015 and January of this year, Germany welcomed about 32 times that many in a similar time period.

Friedenshaus helps refugees learn the German language, adjust to life in a new country and form relationships with the local community. Those efforts promote understanding, tolerance and acceptance—all vital to peace, say Gregory Rabus and Jennifer Otto, the long-term Witness workers who established the ministry.

The invitation to speak at TEDx came from Zurich International School students, initiated through a long-time relationship with Rob Friesen, one of the school’s teachers who was inspired by a visit to Friedenshaus last October.

Taking chances and making time for others, listening deeply, expressing curiosity and braving vulnerability are key to helping newcomers settle in, the Langelotzes said in a Skype interview. As they connect with refugees, the couple are learning about politics beyond the West, and the resiliency, faith and courage it takes to leave one’s life-long home and start anew.

Karl and Marla personally took chances too, although they are quick to point out that those chances were far less risky than those that refugees take. They stepped forward in faith by foregoing Karl’s salary as a teacher and Marla’s as a pastor, in order to serve at Friedenshaus, leaving family and friends behind for nine months. Venturing into an unfamiliar setting allowed them to encounter some of the newness and ensuing vulnerability that refugees experience.

For Marla, a pastor at Sargent Avenue Mennonite Church, this was particularly evident in challenges surrounding language. Although she could understand some German, she could not speak it, and had to take lessons as well. “I had to embrace that vulnerability of giving up control, of not being able to communicate well,” she said.

“The other students seemed to notice and appreciate that,” said Karl, who taught several classes at Westgate Mennonite Collegiate, including German. He pointed out that vulnerability was an important part of Jesus’ ministry. “I understand his life to be one focussed on relationships with and for those on the fringes: the powerless, the hungry, the homeless. But the key to these relationships is this aspect of vulnerability.”

During classroom hours the day prior to TEDx, and during the time between TEDx sessions with other speakers, the Langelotzes had plenty of time to connect with the Zurich students. Marla recalled a particular conversation with two Grade 11 students who approached them shyly. One said, “I really like what you said about Jesus. My family no longer goes to church, but when I was young we went and I just remember church being about rules. I’ve been thinking that maybe I should go back.”

The Langelotzes complete their short-term ministry assignment in June. A link to their TEDx presentation is not yet available. 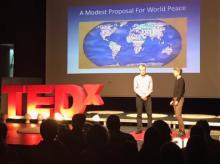