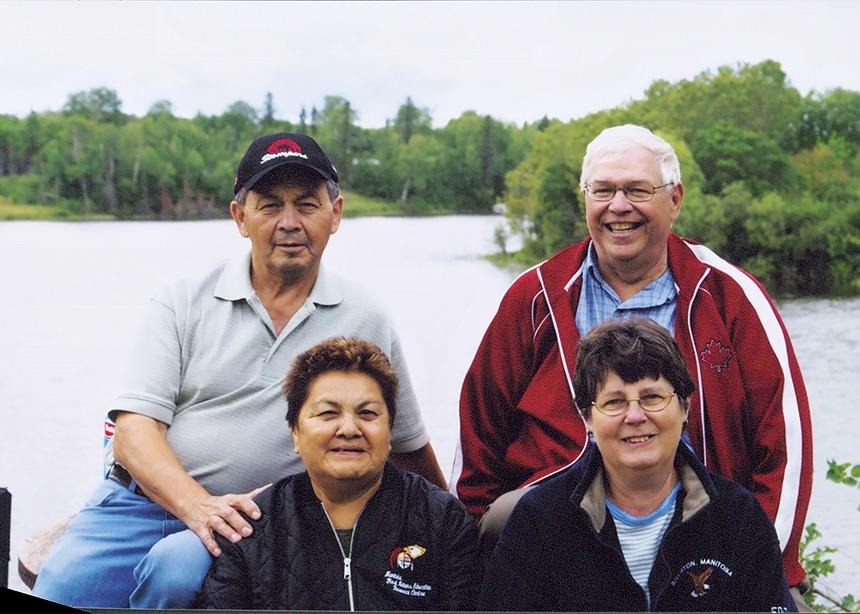 Norman Meade and his late wife Thelma, left, are pictured with Neill and Edith von Gunten along the Manigotagan River in 2010. (Photo courtesy of the von Guntens)

As Neill von Gunten and his Black companions departed an increasingly volatile Chicago rally at which Martin Luther King Jr. had taken a brick to the head, KKK members and other whites attacked their bus at a red light. Bricks flew through windows. Rioters rocked the bus.

Amid panic, the driver ran the red light, eventually returning to the disadvantaged urban neighbourhood where Neill and his wife Edith lived. Chicago was the newlyweds’ introduction to life outside their "sheltered" Mennonite upbringings in rural Indiana.

A year-and-a-half later, during a stint at Canadian Mennonite Bible College (CMBC, a founding college of Canadian Mennonite University) in Winnipeg, Neill and fellow student Ron Boese spent a February night on the streets of Winnipeg begging, inadvertently getting kicked out of a "mission," and spending the night in a smelly "flop house." The next morning, Neill, in his dishevelled attire, attended a nearby Mennonite church, receiving a cool reception.

These are two of the more dramatic episodes recounted in Walking Together: Intercultural Stories of Love and Acceptance, the new memoir by the von Guntens.

After two years in Chicago and another two at CMBC, the couple spent the rest of their working lives—38 years—in several Indigenous and Métis communities around Lake Winnipeg, working for the conference, in its evolving forms.

The book, published by Mennonite Church Canada and available from CommonWord.ca, is a highly readable, regularly captivating, and often touching account. Reading it almost feels like sitting in the von Guntens’ very homey—I'm sure—living room with a cup of hot tea.

It is a missionary book like few others, depicting an approach that is overtly Christian and relentlessly non-impositional.

Racism and injustice are discussed head-on, but the focus is on day-to-day interpersonal relationship and ministry. Stories are framed around the seven sacred teachings, with Edith providing additional spiritual reflections.

Near the end of the book, Neill tells the striking story of a pointed question posed to him by Norman Meade. Meade now serves as an elder-in-residence at the University of Manitoba.

Neill’s account
For as far back as we can remember, life for Edith and me has been entirely constructed around faith, hope, love and relationships. We always kept our door open for anyone at anytime, just as so many homes in Indigenous communities were open to us. Countless people went through our kitchen and living room!

Two life-impacting incidents happened right in the middle of our Manigotagan living room during our early years of ministry. . . .

The first incident occurred when we’d been living in Manigotagan for almost a year and felt at home with our new friends, especially our neighbours, Norman and Thelma. As usual, we put our children to bed early on Bible study night, before the group met in our living room. Seven or eight of us gathered on the sofa and chairs.

After a lively discussion about our study, Edith served coffee, tea and dessert—her chocolate cake, which was always a big hit. Norman seemed particularly quiet and thoughtful as the rest of us continued chatting. This was unusual, and he’d been quite involved during the Bible study discussion, so I figured he was pondering something important.

When the conversation lulled and there was nothing but the clink of coffee cups and forks in our ears, Norman spoke in his firm yet gentle way. “Neill, did you think you were better than the rest of us in Manigotagan when you moved here?’

The question stopped me in my tracks. My heart leaped into my throat. Heads bobbed up and the conversation in the living room stopped. I guess everyone was as surprised as I was by his question. Everyone turned my way, waiting for my response. I had to take an honest look at myself before I could answer him truthfully. Despite my surprise that Norman would ask such a loaded question, I was glad that he felt free enough to do so, even in front of others. He deserved an honest answer, and it was right there, in my heart, but it wasn’t easy to admit.

“Yes, I did, Norman, I finally replied. “I came here after two years of studying at Bible college and I thought that I had a lot of answers.” With everyone’s eyes fixed on me, I continued. “I don’t feel that way now, though. I’ve learned so much from the people here—including you—and I know I have much more to learn.”

“For example, you taught me that God the creator was here long before us settlers arrived, and that Creator speaks to us through all of nature, if we’re willing to listen.” I looked from Norman to each person in the room by turn. “You’ve all taught me so much about God and about his creation. The Spirit is very alive in this community. Over the past year, I’ve gained deep appreciation for the respectful way you make your living off the land and water, and how your families have struggled to survive as a people all these years.”

Norman responded with a smile. “I can tell. You’re different,” he said. “You seem to understand us better, and your family has become an important part of our families and community.”

My relationship with Norman continued to grow over the years. Both of us like to look at situations from different perspectives. Sometimes we even take sides to debate an issue—and then switch sides so we can understand both perspectives better. A big part of our relationship is our ability to be truthful and honest with one another, and to stay open to new ways of thinking.

The afterword to the book is written by Loretta Meade Ross, the daughter of Norman and his late wife, Thelma. Meade Ross is the treaty commissioner of Manitoba. She leads off the afterword as follows:

“Do you think that you are better than us?”

Tears came to my eyes when I read that my dad . . . had asked Neill this question. It was a difficult question to pose to a friend, yet it is one that every Indigenous person wants to ask at some point. . . .

That question, Neill’s response and the journey toward relationship is at the heart of this book. 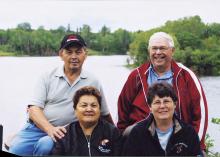 Norman Meade and his late wife Thelma, left, are pictured with Neill and Edith von Gunten along the Manigotagan River in 2010. (Photo courtesy of the von Guntens) 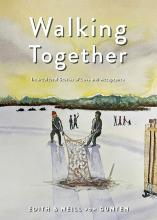 Walking Together: Intercultural Stories of Love and Acceptance (book cover)