How steam wells work to relieve droughts in Ethiopia 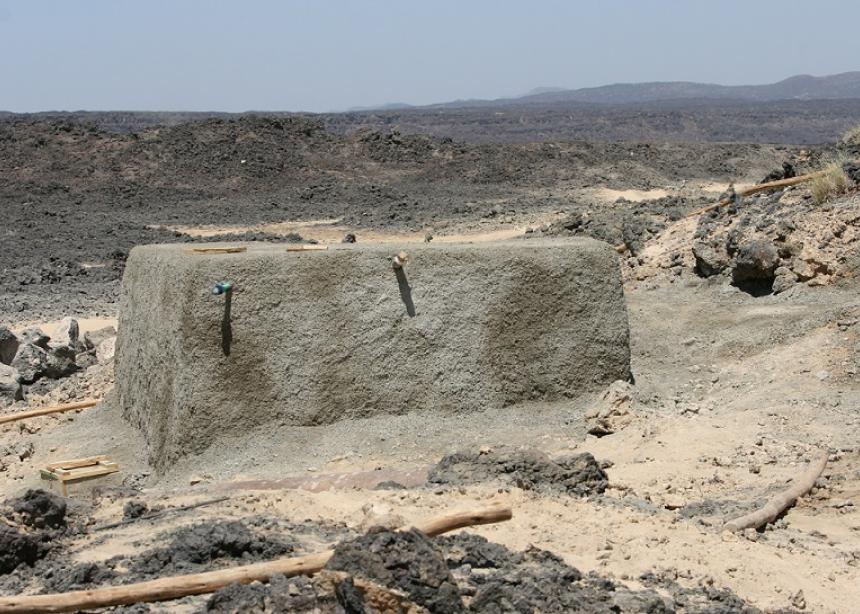 In parts of the world where the effects of climate change are severe and rains are dangerously infrequent, Mennonite Central Committee (MCC) is supporting innovative projects to improve access to water.

According to Bruce Buckwalter, an MCC representative in Ethiopia, the Afar region is particularly dry and arid. Because there are few livelihood opportunities outside of farming, many people rely on their herds.

“Traditionally, the Afar pastoralists have been largely dependent on surface water, like stream beds, shallow hand-dug wells or traditional cisterns, for human and livestock water needs,” he explains. “Climate change is seriously affecting the pastoralists who have few options for access to water.”

But a steam well in the Bidu district of Afar is changing things in the region. Here’s how:

Making use of geothermal activity
Geographically, the Bidu district is located where three tectonic plates meet. Mild volcanic activity, such as steam vents, are common. Subterranean water that is relatively near to the surface is geothermally heated and produces steam. The steam moves up through a fault line in the earth and escapes through vents.

Steam wells don’t function like other wells. They are not holes in the ground where water accumulates. Rather, this kind of well is a dome built over steam vents. The Bidu dome is made of concrete and captures the steam from three vents. As the steam enters the dome, it cools and then condenses into water. The water then runs through a pipe to a large concrete cistern, where it is stored for future use.

This technology is adapted from traditional Afar water harvesting techniques.

Supporting an age-old method
People from Afar have been able to harvest water for generations by capturing and cooling the steam in a stick and mud trap built over a circular rock well surrounding the vent.

“This steam vent is an improvement on a traditional technique that has been used for many years,” Buckwalter explains.

This Bidu vent is significantly bigger than an Afari steam well, and requires much less upkeep, he adds.

Low-cost maintenance
The well, which was built in January and February of 2018, requires very little money for additions or maintenance, Buckwalter says.

All it needs is occasional cleaning, and for roaming animals to be kept away. There are no moving parts that need to be replaced.

Additionally, in times of emergency, the steam well cistern doubles as a water collection point for water that must be trucked in. The steam well provides another option for access to water in a remote part of the world.

Less stress on limited resources
Bidu is on the border of Ethiopia and Eritrea. Because of the ongoing economic and political instability across the border, hundreds of thousands of refugees have fled to Ethiopia since September, when the border, which had been closed for 20 years, reopened.

Buckwalter says that can put added pressure on resources that are already very limited. But the steam well is helping to alleviate some of that pressure.

In addition to the steam well, MCC is also supporting an emergency water project in the Afar region. That included repairing and building traditional in-ground cisterns called birkats, assisting to contain an outbreak of cholera, and training water committees to oversee the upkeep and management of the steam well and water system in the communities.

Sisay Kasu, left, project manager for MCC Ethiopia, and Hussien Edris, project coordinator for Afar Pastoralist Development Association (APDA), look at the sediment trap leading into a birkat, a traditional water catchment system that MCC and APDA have expanded and modernized as part of an emergency water project in northern Ethiopia. (MCC photo by Rose Shenk)

From where he is standing, MCC Ethiopia representative Bruce Buckwalter can feel warm air escaping from underground steam vents. Notice the dried grass that grows from moisture making its way to the surface from the underground steam. (MCC photo by Rose Shenk)