How should Anabaptists celebrate 500 years? 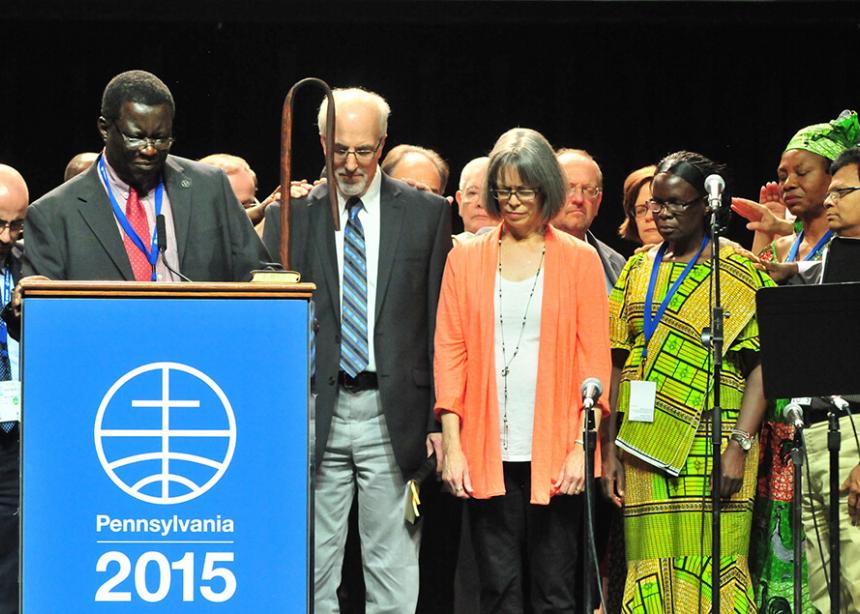 <p>Outgoing MWC president Danisa Ndlovu prays for the new president Nelson Kraybill and his wife Ellen, while members of the MWC executive committee surround them. The new vice-president, Rebecca Osiro, stands beside Ellen. (Photo by Dale D. Gehman for Meetinghouse)</p>

Mennonite World Conference held its first assembly in 1925, which was the 400th anniversary of the beginning of the Anabaptist movement. With the 500th anniversary now only 10 years away, many people are wondering how MWC plans to commemorate it.

A workshop on July 24 at the MWC Assembly in Harrisburg, Pa., addressed that question. “From Reformation 2017 to Anabaptist 2025: How Should the Global Church Commemorate a 500-Year Birthday?” provided some hints of what may happen.

Hanspeter Jecker, Astrid von Schlachta and John D. Roth convened the workshop and asked for suggestions from those in attendance as well as explaining the context of this question.

In a word, the answer to how to commemorate this is, “carefully.”

This led later to dialogue between those groups. Roth said, “How we commemorate our beginnings helps us understand who we are today.” He also cautioned against any exuberance by saying, “We are celebrating a church division.”

Jecker, who is Swiss, explained that Lutherans started a decade of celebration in 2008, leading up to 2017, the 500th anniversary of the beginning of the Reformation. Meanwhile, the Reformed Church, much more present in Switzerland, is celebrating its origins from 2017 to 2024. He said there have been good contacts between the Reformed Church and Mennonites in Switzerland, with the former taking the lead and proposing projects they want Mennonites to take part in.

Schlachta, who is German, noted that the first MWC Assembly emphasized renewal, being Christocentric, the danger of materialism and the church being the first object of mission.

Roth pointed out that renewal is also of keen interest now. Back in 1925, there were few Anabaptists; now there are 1.9 million. He said the planners of any events want to be in conversation with the 103 groups that belong to MWC as well as groups that are not members but related, such as the Amish, Old Colony groups and free-church groups in Germany.

Jecker said that any commemoration should reflect our theological commitments, ecumenical partnerships, and our global reality. He presented a set of proposals that include a decade-long commemoration that runs from 2017 to 2025/27.

Tentatively called Renewal 2025, it would include a regional event for each of five continents, to be held every two years. A possible schedule includes a meeting of commissions in 2016, a General Council meeting in 2018, the next MWC Assembly in 2021 in Indonesia, another General Council meeting in 2025, and an MWC Assembly in 2027, possibly in Switzerland.

The regional events, Jecker said, could focus on an array of topics, including the Holy Spirit, Scripture, just peace, religious toleration, unity and diversity, church and society, witness, baptism, revelation, and gender and sexuality. Goals could include intra-Anabaptist relations, ecumenical relations, global witness and self-understanding.

Roth emphasized that the Faith and Life Commission welcomes suggestions for how to proceed.

Gordon Houser is editor of The Mennonite. This article was written for Meetinghouse, a group of Mennonite publications.

Outgoing MWC president Danisa Ndlovu prays for the new president Nelson Kraybill and his wife Ellen, while members of the MWC executive committee surround them. The new vice-president, Rebecca Osiro, stands beside Ellen. (Photo by Dale D. Gehman for Meetinghouse)