‘House church with a building’ 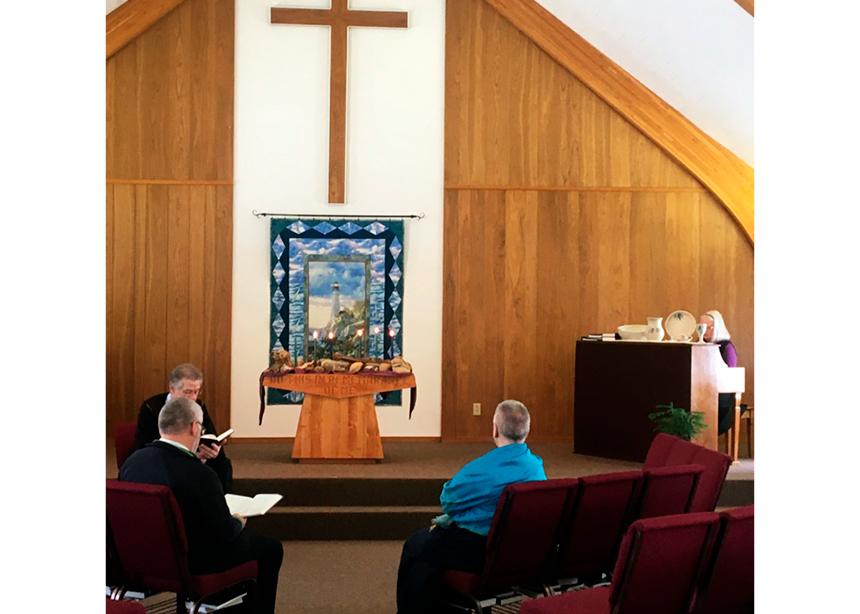 Northgate Anabaptist Fellowship members meet in their church building on the second Sunday of Lent, shortly before the pandemic forced them to worship from home. Ernie and Eileen Klassen, facing the front of the church, listen as Wayne Plenert leads worship, with Delores Plenert at the piano. (Photo by Esther Klassen)

With eight members, Northgate Anabaptist Fellowship of Dawson Creek is the smallest congregation in Mennonite Church British Columbia. It is also the most remote, located about 1,880 kilometres northeast of Vancouver, near the Alberta border.

But due to the transient nature of life in B.C.’s north, most members eventually moved out of Dawson Creek, a town of about 12,000. Five years ago, the fellowship switched affiliation to MC B.C. because the MB stewardship model, which emphasizes evangelism and growth, did not fit it.

With no pastor, the group has the feel of a house church, what in other congregations would be called a small fellowship group. It has had a meetinghouse since 1979, but no pastor since 2003.

“We are a house church with a building,” says Eileen Klassen, Northgate’s administrator. However, during the COVID-19 isolation period, the members have chosen to meet by Zoom rather than in person, Klassen says, because of provincial protocols for cleaning the church building.

On a typical Sunday morning, members connect by Zoom and take turns reading Scripture, giving the message and leading in prayer. Wayne Plenert and Ernie and Eileen Klassen take turns planning and leading worship, which includes discussion of the message and sharing. Having an online worship also allows others to join them, including participants from Pender Island and Vernon in B.C. and from Waterloo, Edmonton and even Pennsylvania.

While its size is a challenge, the members believe it is also an asset.

“We like to think of ourselves as a thoughtful church,” Plenert says. “We see real advantages in a smaller group, in that we do not need to pay a great deal to maintain the group and can support our community and the organizations we respect more easily. The model we developed for church quite some time ago still works.” 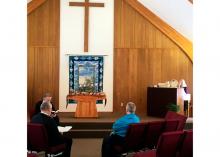 Northgate Anabaptist Fellowship members meet in their church building on the second Sunday of Lent, shortly before the pandemic forced them to worship from home. Ernie and Eileen Klassen, facing the front of the church, listen as Wayne Plenert leads worship, with Delores Plenert at the piano. (Photo by Esther Klassen)

Although Ben Heppner grew up in Dawson Creek before we moved here, we were told he attended the Alliance Church. Northgate only began in 1963.