Hope through lament and loss 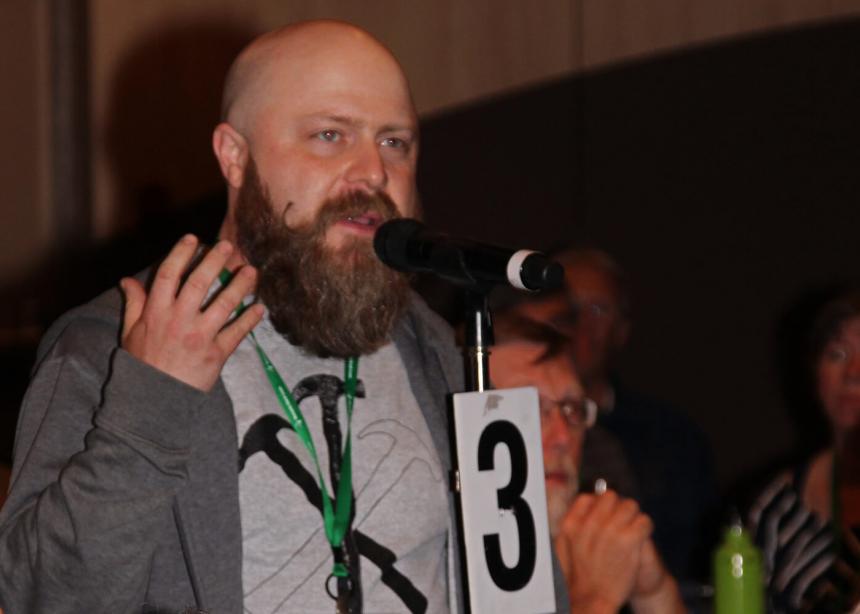 Mennonite Church Canada, which held its biennial assembly, “God~Faith~People,” in Saskatoon from July 6 to 10, 2016, faced two major decisions after years of study and consultation. Both the recommendations from the Being a Faithful Church (BFC) and Future Directions task forces passed with large majorities in the end, but the tension among the gathered delegates and leaders was front and centre. Large blocks of time were set aside for both task forces to present their findings and for delegates to interact with the leaders and speak to the motions.

The opening night included MC Canada “parliamentarian” Peter Peters challenging the delegates to “engage our times of discernment and interactions in a spirit of unity as Christ taught us, relating with one another with respect, patience, compassion, kindness, humility, gentleness and forbearance, being thankful for the gifts each person brings to this assembly.”

Executive Director Willard Metzger said that “many arrive here with excitement and anticipation. However, others may be arriving with a feeling of being weighed down. The recent massacre of gay patrons at an Orlando night club has produced a heaviness. It has reminded them of their own experiences of painful discrimination. Some may be gathering, afraid that the church they have loved is coming apart—that the theological differences in how we understand God calling us to respond to people in committed same-sex relationships is unmanageable.

“The differences may seem too great,” he continued. “The gap may seem too gaping to bridge. Some may be arriving, fearing that this is the end of the church they have known and loved—that programs that have been meaningful to them for years will be discontinuing. Such changes do not feel like something to be celebrated.”

“But,” he concluded, “we can trust that God is at work even though we do not understand it. God’s people are called to do no more.”

The BFC motion underwent small changes on the floor, as MC British Columbia requested alterations, claiming that the original motion was seen as naming those who affirm same-sex unions in the church as prophetic, in other words, as leading in God’s direction.

The amendment dropped the word “assumed” and replaced it with “understood”  to remove this perceived bias in the motion’s second clause: “We call upon our family of Christ to respectfully acknowledge that there are those among us—congregations and individuals—whose careful study of Scripture and prayerful journey of discernment lead them to a different understanding on committed same-sex relationships than is commonly ‘understood’ by readings of Article 19 in our Confession of Faith in a Mennonite Perspective.”

Delegate after delegate spoke to the motion.

Stephen Swires, pastor of First Mennonite Church in Burns Lake, B.C., shared a traditional biblical exposition, naming same-sex practice as sin, even though he believes that Christians should love and accept homosexuals.

Pieter Niemeyer, pastor of Rouge Valley Mennonite Church in Markham, Ont., who identifies as a gay man, told the delegates that he believes his sexuality is created by God and that God’s Spirit is calling the church to live with diversity in a similar manner to Paul’s call to the Roman church in Romans 14-15.

Between these two poles delegates lined up behind the microphones at the delegate sessions, discussed the matter intensely at table groups, filled meeting spaces for presentations and discussions, and attended workshops.

Dan Epp-Thiessen, associate professor of Bible at Canadian Mennonite University in Winnipeg, led a two-part workshop, “Reading the Bible in the light of same-sex relationships.” Thiessen stated from the outset that he was attempting to show those with a traditional view of the texts that it was possible for others to hold a reformist view of those same texts, and to show those with a reformist view that the traditional view of the texts has value.

Gerry Binnema, pastor of United Mennonite Church in Black Creek, B.C., later shared in the last delegate session on the BFC that he had come to assembly to vote “no” to the resolution but, after wrestling with Scripture in Thiessen’s sessions, had come to see that others had a different “interpretive lens” and might faithfully come to different conclusions on the issue, and that he would vote “yes.”

No applause greeted the results, with the realization that many congregations and individuals did not approve.

Randell Neudorf, pastor of The Commons church in Hamilton, Ont., noted that many newer congregations have a hard time sending delegates due to costs and less-stable job situations. Only five new Canadian congregations were represented.

A move to the ‘future’ gets the go-ahead

Key in the Future Directions discussions were questions about national delegate sessions, who was driving the decision, missions, and whether this was a “done deal.” Task force members, area church moderators and MC Canada leaders spoke to these issues, saying:

Ninety-four percent of delegates approved the move to these structural changes, but there were many questions and comments about whether this was what MC Canada should be doing. Many wondered whether “tinkering” with the structure was enough, or whether questions of purpose and vision needed to be asked. Leadership again responded that, by working together area churches could draw nearer on national agenda and direction items more easily with a more integrated national church.

This did not stop delegates from speaking to the continued shortfall in finances—a deficit of $652,127 in the latest fiscal year—as a sign that congregations and individuals were not buying into MC Canada’s vision and direction.

Harold Schlegel, interim pastor of Gretna (Man.) Bergthaler Mennonite Church, said that, in his 32 years of pastoring, MC Canada had been restructuring the whole time. “Structure is the servant to mission,” he said, adding that he expected the current changes would have a “short shelf life,” but that delegates should “give it a chance,” all the while “giving attention to God and what God wants us to do.”

Delegates processed an amended resolution on Palestine and Israel in response to a plea from Palestinian Christians that “the global church come alongside the Palestinian people as they suffer under Israel’s 49-year military occupation of their lands.” The amendment included acknowledgment of the suffering of Jewish people in the conflict, and a desire to work with Jewish organizations in Canada as well.

A resolution to “Repudiate the Doctrine of Discovery,” which continues to prioritize non-indigenous ideas, culture and rights over those of Indigenous Peoples in Canada, was also passed by delegates.

1. Executive director Willard Metzger said at the beginning of Assembly 2016 that “some may be arriving, fearing that this is the end of the church they have known and loved.” What do you fear most about losing following the decisions made in Saskatoon? What most excites you about the church’s future?

2. In “Covenant and law,” keynote speaker Safwat Marzouk said that the church “sometimes needs to be challenged by the other voice or the other side of spirituality that is present in the biblical text.” How do you respond to the “other voice,” especially when that “voice” doesn’t want to listen to what you have to say?

3. In the ‘Young adults don’t need the church,’ seminar participants found that “there were a remarkable number of similarities in spite of the age differences,” as well as across cultures. How can we get past these seeming differences and focus on those similarities we have as followers of Jesus?

4. After much hand-wringing across the country over the past few months, as reported in the pages of this magazine, delegates overwhelmingly voted to accept the Future Directions Task Force recommendations and move on. What do you think caused such a sudden shift, and why?

5. In the conversation on whether to permit churches to conduct same-sex marriages, Gary Fehr of Blumenort (Man.) Mennonite Church said that “there has been very little talk about being accountable to the institution of marriage and how God meant it to be prior to sin entering the world.” Why do you think that is? Are concepts such as sin—and evangelism, as mentioned by Tom Yoder Neufeld of First Mennonite Church, Kitchener, Ont.—no longer welcome in polite company in our churches? What is the future of our church without them? 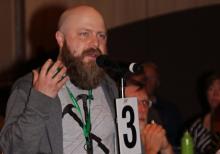 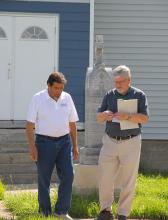 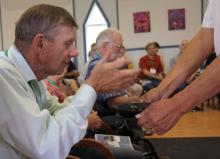 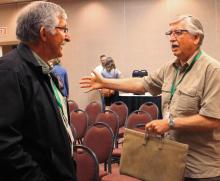