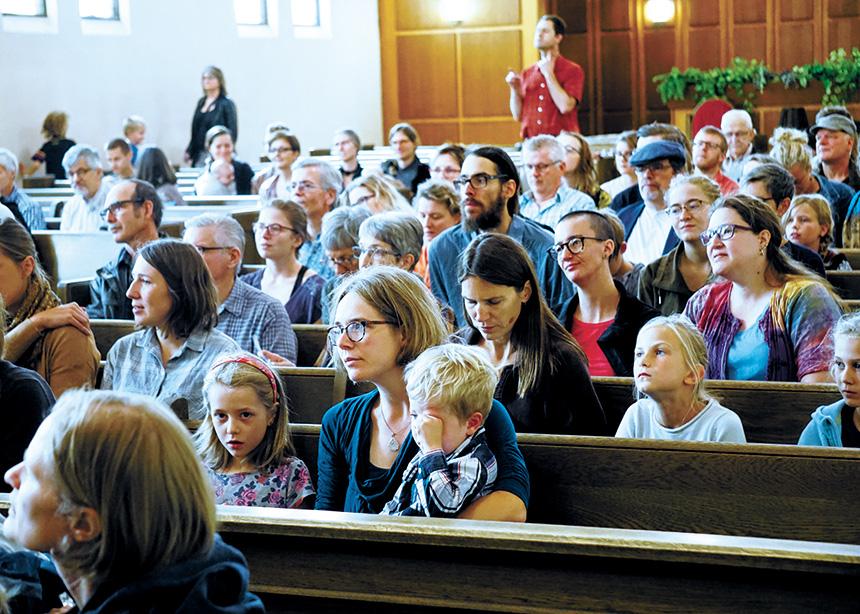 Hope Mennonite Church worships in its new space that is rented from Thomson Funeral Home. (Photo by Heidi Nighswander-Rempel)

At Thomson Funeral Home on Sunday morning, you won’t find a hearse, or the building filled with mourners. Instead, it is bursting with life.

The space is home to Winnipeg’s Hope Mennonite Church, a thriving community of around 200 active participants and members. The congregation moved into the funeral home last September because it faced a unique problem. It was growing.

When Hope began in 1987, only about 25 people met regularly on Sunday mornings. The group grew in the first few decades of its life, but very slowly. Pastor Lynell Bergen says the church’s flourishing numbers became most noticeable about a decade ago, when more children were being born into the congregation, and young adults, particularly from Canadian Mennonite University (CMU), began flocking to the church.

Soon Hope’s services became cramped and it no longer had enough space to have potlucks. The expansion became significant enough that, about three years ago, the congregation created a visioning group to help navigate this new reality. It was agreed that more staff was needed, and the church hired a second pastor in the summer of 2016.

But what about the church’s physical space? Options came flooding in, among them to hold multiple services or split in two to create a new church.

Eric Stutzman, who co-chaired the group with Bergen, says the committee had to begin with the basics. “We felt that in order to make a good decision about what to do with church growth, we had to anchor that in our values,” he says. “So that’s what we decided to start with: Who we are as a church and what matters most to us.”

Through a series of congregational meetings and surveys, “Hopers” shared stories about what makes their church unique and what it looks like at its best. The congregation eventually chose to move its worship services out of its longtime home at Crossways in Common, a space it shared with several other groups, including Young United Church.

“It was a hard decision,” Bergen says. “Many people loved the intimacy of a small congregation, but they also loved the benefits of a larger group: enough children for age-appropriate Sunday school classes and sharing the load of maintaining all the programs and ministry of a church.”

Although people were anxious about losing the small community, people also valued the relationships they had with new people joining the congregation, and there wasn’t enough energy to start another church from scratch. In the midst of the discussion, Young United changed the time of its service, making it difficult for Hope to find a worship time that worked for everyone. The decision was made.

It wasn’t without its challenges though. “When you have a couple hundred people, how do you hear everybody, how do you bring everybody together to have a conversation?” Stutzman says.

The church handled things in a unique way: decisions were made by consensus, meaning everyone had to be in agreement before moving forward. “We weren’t leaving people behind in our decision-making process and we didn’t have a large dissatisfied minority,” he says. “That inclusive approach to decision-making kept us strong and healthy throughout the process, and that was amazing. That doesn’t always happen in churches.”

Bergen says Hope loves having its own space. “There’s a level of freedom we are enjoying, to use and care for the space as if it is our own during the hours we are there,” she says. “The children of Hope have claimed the space in ways they were never able to . . . and we can linger in the sanctuary to visit as long as we wish, not having to get out of the space to make room for another congregation.”

But what makes this flourishing church beat the odds?

“When I ask new people why they choose to come to Hope, they often tell me they’ve heard there is a theological openness, room for people with doubts and questions, or people who are on the margins of the church,” Bergen says. “Hope was also the first Mennonite church in Manitoba to adopt an officially welcoming position for LGBTQ+ people.”

“Definitely part of it has to do with being an LGBTQ+-inclusive congregation, but that’s not the whole picture,” Stutzman says. Situated close to affordable housing and not far from CMU, Hope benefits from its convenient location. Part of it, too, is the diverse content that comes from the pulpit each Sunday. “It was never our intention to grow, but I think it was a by-product of both who we are and where we are,” he says.

This article appears in the April 1, 2019 print issue, with the headline “A unique challenge.” 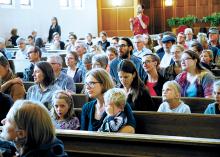 Hope Mennonite Church worships in its new space that is rented from Thomson Funeral Home. (Photo by Heidi Nighswander-Rempel)