A hoof and heart both need mending 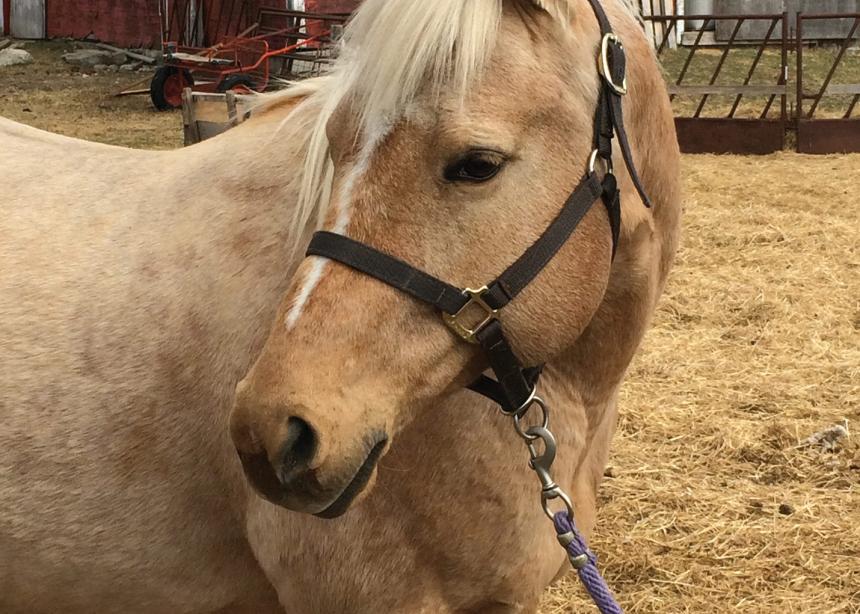 Doug Klassen's horse Dolly had a visit from her farrier. (Photo courtesy of Doug Klassen)

He was a welcome sight when his truck and trailer pulled into the yard. Even before the truck stopped moving, he jumped out the passenger side and started walking toward me.

“Doctor Klassen?” he said as he held a cigarette at the side of his mouth. He reached out his tattoo-laden arm and introduced himself: “Morgan Girletz. Good to meet ya. Let’s see yer horse!”

Dolly had developed a very bad crack in her one hoof, and I was told that Morgan was the guy who could fix it. When I brought her up from the paddock, he had plenty of colourful adjectives to describe what he saw. And the vocabulary continued as he spent the next hour-and-a-half making the delicate repair.

‘Kill all the Canaanites’ or ‘love your enemies’?
That began to change a few years ago when I came to a crisis in my faith. For years I had not been able to reconcile the “kill all the Canaanites” God that I read about in the Old Testament, and the “love your enemies” Jesus that I read about in the New. I concluded that Jesus’ death on the cross saves us from God, but God still had high expectations of purity that I needed to obey.

In hindsight, I conclude now that God wanted a deeper relationship with me and would not let me rest in those thoughts. Time and again, those on the periphery of the church would bring up the violence of God in the Old Testament and their lack of desire to get to know him better.

At the same time, Sunday after Sunday I would preach Jesus, who was forever seeking out those on the margins and bringing them in. But bringing them in to what? It wasn’t until I led a Bible study of the first chapter of Hebrews that I realized I needed to figure out who God really was.

Hebrews 1 begins: “Long ago God spoke to our ancestors in many and various ways by the prophets, but in these last days he has spoken to us by a Son, whom he appointed heir of all things, through whom he also created the worlds. He is the reflection of God’s glory and the exact imprint of God’s very being . . . .”

Then there were those words in John 10:30: “I and the Father are one”; and John 14:8, in which “‘Philip said to him, ‘Lord, show us the Father and we will be satisfied.’ Jesus said to him, ‘Have I been with you all this time, Philip, and you still do not know me? Whoever has seen me has seen the Father.’”

So what should I believe? Do I believe what Jesus says about himself and the Father, or do I believe what many of the Old Testament writers said? Certainly, there are glimpses of a loving God in the Old Testament, but I just couldn’t get past the verses that endorse slavery, war, plunder, genocide and, perhaps the most troubling, God’s need for his own son to die on the cross to pay for my sins. Why can’t the Father forgive me as freely as Jesus forgave those in his presence?

Right around this time, a church member asked me to meet him for lunch downtown. He wanted to talk with me about the work of Rene Girard that had been featured on CBC’s Ideas program. Girard was primarily a philosopher and an anthropologist, but time and again his work drew him to the biblical story.

It was his vast knowledge of other ancient Near Eastern cultures and the mechanism of the scapegoat that became the breakthrough for me. Girard pointed out that God knew the only way to overcome the whole violent way of the world—memetic desire—was not to fight against it and beat it back, but to give himself up to it, to let it do its worst to him and then to overcome death itself.

If God was exactly like everything that was said about him in the Old Testament, Jesus would have appeared and been exactly like that, because we believe Jesus is God. If God did demand all of those violent sacrifices and genocides, then for Jesus to be considered God he should have acted just the same because one of the primary tenets of our faith is that God is unchanging.

But Jesus doesn’t act like that. In Isaiah 43, God was going to give Egypt as a ransom to get the people he loved back. Jesus doesn’t subject any people; instead, he loves them all. In fact, he puts himself out as the ransom, so to speak.

Likewise, when Jesus delivers his first sermon that is recorded in Luke 4. When he quotes Isaiah, he leaves out the verses about God’s vengeance. Even Jesus’ cousin didn’t see it at first. When Jesus approached the Jordan River for baptism, John cried out: “His winnowing fork is in his hand, to clear his threshing floor and to gather the wheat into his granary; but the chaff he will burn with unquenchable fire.” Yet in the Book of Revelation, we see that the lion of Judah is actually a slaughtered lambkin, and the gates of the city are open.

We started out thinking that God was not much different than the other violent gods who commanded sacrifice. But even from the beginning, we see glimpses of a God who is not at all like the other gods of the region (Exodus 34:6; Numbers 14:18; Nehemiah 9:31; Psalm 86:15; Joel 2:13). Instead, God is regularly spoken of as forgiving, gracious, merciful and abounding in steadfast love.

Yet our desire to have Yahweh fight Baal on Baal’s terms was too strong. Many of the prophets died trying to convince us that God didn’t want sacrifice, but instead wanted our hearts.

Reading the Bible through the lens of Jesus is basic to our Anabaptist faith, but for some reason I had a new sense of that now. I could release those violent, genocidal texts in the Old Testament as writers trying their very best to understand the nature and will of God, but not quite getting there.

Further endorsement came in Colossians 1:19: “[I]n [Jesus] all the fullness of God was pleased to dwell.” Not just a third of God, but all the fullness of the Trinity was/is dwelling in Jesus. And if this is true, if Jesus is the exact imprint, the very likeness of who God is, then there can be no violence in God at all, because there was no violence in Jesus. And there can be no exclusion in God at all, as Jesus never excluded anyone from his presence. In fact, much of what is written about Jesus in the gospels is of him going to the marginalized, the women, the ill, the outcast, even the thief on the cross, and demonstrating God’s love for them by bringing them in.

A transformed heart
Morgan knew what he was doing. With a combination of hot rasps, horizontally driven lace nails and a form-fitted shoe, he carefully avoided any nerve damage and repaired a deadly crack in Dolly’s front hoof.

There was a time when I would have been uncomfortable being seen with Morgan. I was afraid of the chatter, “this man welcomes sinners” (Luke 15:2). But more than that, I was afraid of what God would think of me.

Since this transformation in my heart, I can see now that God wants me to love all of God’s children, without fear and without having an agenda. As Letty Russel says so beautifully: “Jesus’ message is that all persons are created by God and all are welcome in God’s household.”

Further, Sarah Bessy writes: “Our lives tell the truth of what we believe about God.”

Richard Rohr states, “We become what we behold.”

What we believe about God shapes every aspect of our lives and our relationship with others, be they an adjective-gushing, tattoo-laden farrier, or the prim and proper, purity-seeking Pharisees of our time.

God makes room for everyone because God is “above all and through all and in all” (Ephesians 4:6).

Doug Klassen is the senior pastor of Foothills Mennonite Church in Calgary.

1. What were you taught about the need for faithful Christians to avoid immoral locations or people? In what situations is it appropriate to spend time with people who say and do things that your mother would not have approved of?

3. Klassen says that previously he assumed that “God still had high expectations of purity that I needed to obey,” but he came to understand that God is love and “there can be no exclusion in God.” What is the relationship between purity and inclusion? Is the search for purity always pharisaic?

4. Who are the marginalized people in your community? Klassen quotes from Letty Russel that “all are welcome in God’s household.” What does this message mean for the church? 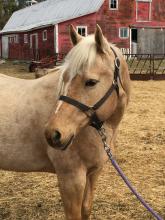 Doug Klassen's horse Dolly had a visit from her farrier. (Photo courtesy of Doug Klassen) 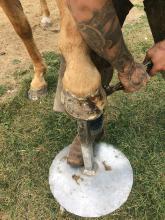 Doug Klassen's horse Dolly is kindly and carefully cared for by her farrier Morgan Girletz, who spent a hour-and-a half making a delicate repair to her hoof. It inspired Doug to write this feature article. (Photo courtesy of Doug Klassen) 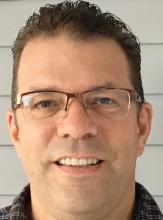 I had an assignment in my Bible class to read an article we found and write a letter to the author. I read your article and really enjoyed reading it.

I also sometimes have had similar feelings about being with people who use foul language. I would feel more tempted to use such language after hanging out or being around people who say things like that on a regular basis.

I also really liked that you brought up the point of how God seemed to be more of a ‘killing’ God in the Old Testament and a loving God in the New Testament.

I’m also finding it challenging to understand the part when you talked about how God needed to ‘give himself up to it’. I’ve never thought about the ‘violent ways of the world’ ever having any power over God. I always thought that God was in control of everything and he would only send bad things to people if he knew it would work out for the greater good. I’m not so sure I’m totally with you on the part about God giving himself up.

I really like the part you wrote about when you said that, if God in never changing, then why was he a more violent God in the Old Testament and a more loving God in the New Testament? And why was Jesus so loving to everyone? I don’t think we have the capability to fully understand the answer to that question as humans.

I thoroughly enjoyed reading your article. It was very thought-provoking, and it made me think a lot harder about some of these challenging questions and look at them from a different angle.