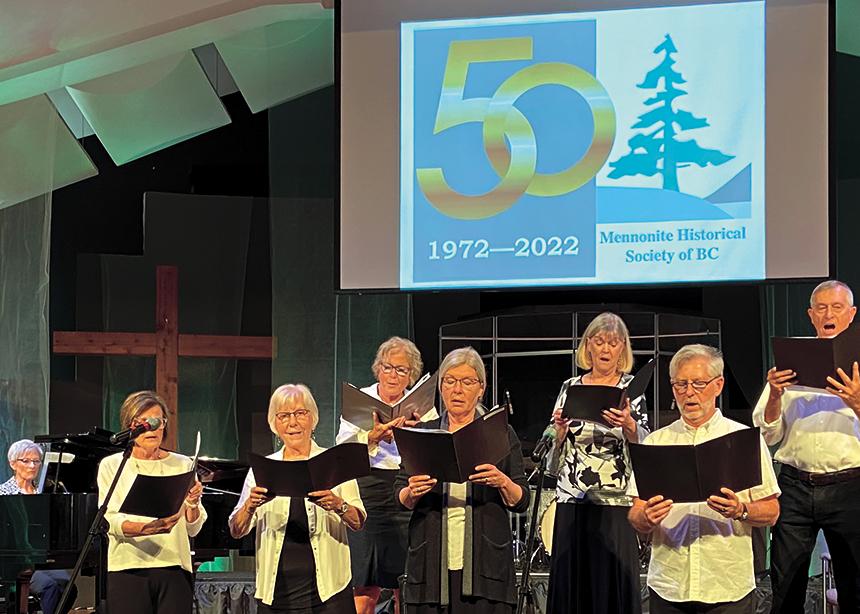 An ensemble of singers, accompanied by Julia Toews on violin, performs traditional Mennonite hymns at the Mennonite Historical Society of B.C. fundraiser on Oct. 2. The theme for the afternoon was ‘Music that shaped our Mennonite souls.’ (Photo by Jennifer Martens)

“What we have heard and known we will tell the next generation,” says the watchword of the Mennonite Historical Society of B.C., and on Oct. 2 at South Abbotsford MB Church, the society marked its 50th anniversary with a celebratory afternoon of music in the Mennonite tradition.

The Mennonite Educational Institute Concert Choir, directed by Dean Wedel, opened the show, which was perhaps a bit more Menno-contemporary, with music from diverse cultures and syncopated beats.

In her introductory talk, Maryann Jantzen, the society’s director, affirmed that the audience would be hearing “music that has shaped and inspired many of us.” Music, she said, “has the power to calm our hearts and ease our pain.”

It can also lead to change, as in the Baltic states’ “Singing Revolution.” Further, “music can shape a culture’s self-understanding,” she noted. Possibly, although the evidence is scanty at this point, early Prussian Mennonites may not have permitted any singing in their churches, “so as not to draw attention to themselves.”

Music became a vital part of Mennonite life after their migration to Russia, and especially under the influence of gospel-oriented Pietism that developed in the German Lutheran church, and then extended into Mennonite colonies in Russia as well. From then on, four- part-harmony choral music became a passion for Russian Mennonites, who published a series of hymnbooks.

A handful of hymns were performed through the afternoon, and the stories behind them were told.

Long-time pastor Harry Heidebrecht said that “Praise to the Lord, the Almighty” (Lobe den Herrn) had Pietist origins. “Now Thank We All Our God” (Nun danket alle Gott), a song of praise, was written by a pastor during the horrors of the Thirty-Years War, in which millions died. The hymn eventually developed into a “freedom song” for Mennonites fleeing the Soviet Union; they would sing it upon crossing the border into the West. Heidebrecht has in his possession a hymnbook originating in the Mennonite colony of Terek in the Caucasus, and passed down to him by his family.

“Wehrlos und verlassen,” or “When I’m Lonely and Defenceless” is not the same hymn, as “In the Rifted Rock,” although they share the same melody, Jantzen said. The song is based on Psalm 91:4: “He will cover you with his feathers.”

Louise Price told the story behind the moving hymn, “So nimm denn meine Hände,” or “Take Thou my Hand, O Father.” The song was sung by Mennonites boarding trains in the burgeoning Soviet Union, when the destination might have been unknown: freedom or labour camps.

Perhaps the most historical part of the afternoon was the performance of “Welcome Back,” or “Willkommen uns.” Julia Toews, an expert musician and volunteer at the historical society, told the story: A frail song manuscript dating from Russian Mennonite days was sent to the society. It was Toews’s task to decipher the lines and squiggles, since the music was written in Ziffern, a numbering system that replaced notes on a staff for Russian Mennonites. She managed, and and the song was performed that afternoon by the Archival Singers, a group of skilled local vocalists.

The afternoon neared its conclusion with the congregational singing of “Bringing in the Sheaves,” in order “to acknowledge the influence of American evangelicalism” of the 19th century on Mennonite music, said Heidebrecht..

A video of Brian Doerksen’s pandemic recording of “To the River I am Going,” with a virtual choir, ended the presentation, followed by a singing of the Doxology, which was followed by a faspa meal.

This article appears in the Oct. 17, 2022 print issue, with the headline “‘Music that shaped our Mennonite souls.’” 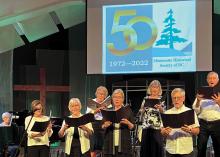 An ensemble of singers, accompanied by Julia Toews on violin, performs traditional Mennonite hymns at the Mennonite Historical Society of B.C. fundraiser on Oct. 2. The theme for the afternoon was ‘Music that shaped our Mennonite souls.’ (Photo by Jennifer Martens)