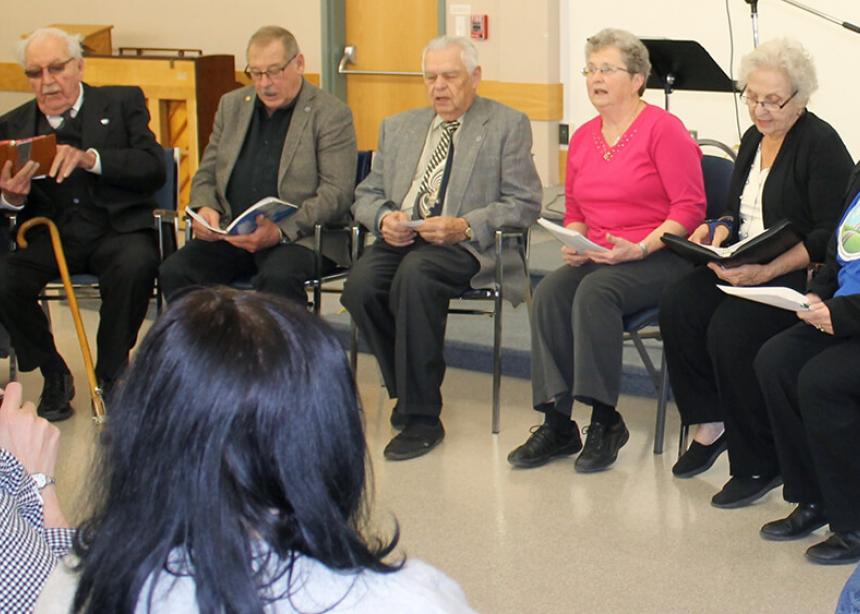 Most Canadian Mennonites have not experienced war first-hand or had their pacifist beliefs tested, but the stories of those who have are an important part of the peace narrative. To address this, the Mennonite Historical Society of Saskatchewan hosted an afternoon of storytelling at Bethany Manor in Saskatoon on Nov. 15, 2015, to which 140 people came.

Mae Poppoff, a member of the Doukhobor Society of Saskatchewan, told how her ancestors lived in Crimea, where land was fertile and they enjoyed peaceable relations with their neighbours. When the Russian government introduced conscription, the Doukhobors felt their faith was being challenged. They could not take up arms against fellow human beings, whom they viewed as brothers and sisters.

On June 29, 1895, they built bonfires and burned their government-issued firearms. This act of defiance led to severe persecution. Poppoff’s grandfather was sent to a prison camp. But those sympathetic to the Doukhobor cause, including Russian novelist Leo Tolstoy, advocated on their behalf. Four years later, the Russian government permitted 7,500 Doukhobors to emigrate to Canada.

Today, said Poppoff, Doukhobors throughout western Canada commemorate the Burning of the Arms each year on June 29, praising God for their ancestors’ vision of peace.

Walter Klaassen, an Anabaptist scholar and historian, began the second narrative by stating, “On April 2, 1917, the United States declared war on Germany. That is one of the reasons why I’m here today.”

Klaassen’s grandfather Jacob and his brother Michael were farmers in Bessie, Okla. Not granted an exemption from the draft they sought, Michael’s son John and about 50 other young Mennonite men were conscripted into military service. When they refused to wear uniforms or cooperate with their commanding officers, the men were abused, tortured and eventually court-martialled. John was sentenced to 25 years in Leavenworth military prison in Kansas.

“This was a sign for Jacob Klaassen and four or five other families to take action,” said Klaassen. Jacob sent two of his sons north to Canada, where Mennonites had military exemptions. Eventually, Jacob sold his farm in Oklahoma and secretly left for Canada with the rest of his family. Other families followed. They settled close to Eigenheim Mennonite Church, near Rosthern, Sask.

Less than a generation later, another world war challenged Mennonites to faithfulness. Leonard Doell, historian and historical society board member, told of several Holdeman families, members of the Church of God in Christ Mennonite, who served time in jail during the Second World War. Among them were the Unruh and Becker families who lived in the Waldheim and Hague areas.

Around 1940, the Canadian government passed legislation requiring everyone aged 16 and older to register. The Holdeman families felt they could not comply. Citing a journal written by a member of the group, Doell read, “Because we could not obey God’s laws and people’s laws, we refused to register.”

Members were arrested and taken to court in Hague, where they were fined for non-compliance. They paid the fines and were released, but were arrested and charged a second time. This time they did not pay the fines and were sentenced to jail. Both men and women served time. So conscientious were they that on completing their sentences, “these families sent money to reimburse the government for their food and lodging while in jail,” said Doell, adding, “Their money order was returned.”

Lyle Stucky, a farmer in the Osler area who was born near Moundridge, Kan., added his story to the peace narrative. When he turned 18, the U.S. was at war in Vietnam. He registered for the draft, as required by law, but sought exemption based on his religious beliefs. From 1966-70, Stucky attended Bethel College in North Newton, Kan. During that time, people from the community who were angered by the Mennonite school’s pacifist stance assaulted Bethel students and vandalized the college campus.

“In January 1970, four months from completing my education degree at Bethel College,” said Stucky, “I was drafted and agreed to do two years of alternative service.” Those two years were spent in Minneapolis, Minn., where he and his new wife, Linda, lived in a voluntary service unit administered by the General Conference Mennonite Church.

Stucky worked as a caseworker and counsellor at the Minneapolis City Workhouse Prison. “I experienced some harassment [from staff who were veterans], but also had discussions with some of them about Christianity and the peace position,” he said.

Reflecting on the afternoon, Jake Buhler, president of the historical society, said, “Today, warfare continues. There is tension today between loyalty to our nation and loyalty to our God.” 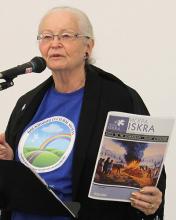 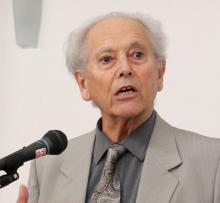 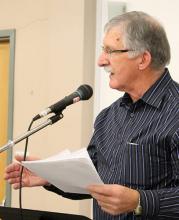 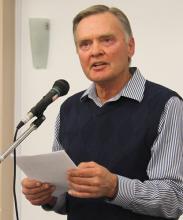