Helping the stranger and connecting with the neighbour 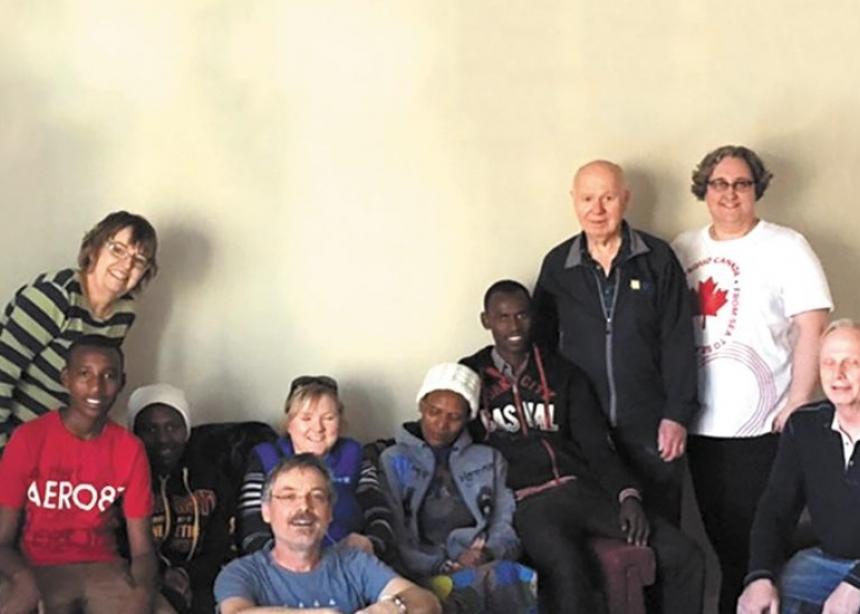 Members of the Winnipeg Mennonite congregation had felt called to support refugees for a long time, because of their history as refugees and the clear need for it in the world right now, says Moses Falco, Sterling’s pastor. Five years ago, the church was in the midst of a sponsorship process and had already begun raising money when the project fell through. Although the church discussed other uses for the money every year at its annual general meeting, none of the options presented ever felt quite right and the project money lay untouched.

The EMC church’s outreach committee had voted in favour of a refugee sponsorship project at the beginning of 2017. But when fundraising began, the committee quickly realized the church wouldn’t be able to finance the project on its own. So a letter was sent to nearby churches in the St. Vital community in south-central Winnipeg, searching for a partner. When Sterling answered the call, both churches felt like they had found the missing piece they needed and quickly started getting excited to welcome a new family to Canada.

Using Mennonite Central Committee (MCC) resources on refugee sponsorship, the congregations formed a joint committee and sub-committees, each including members of both churches, and began fundraising. After combining their funds and hosting a few events, they reached their goal in just a few months.

“I think people really rallied to the spirit of the partnership and we very quickly closed the gap,” says Cornie Thiessen, coordinator of Sterling’s missions and service committee.

At the beginning of 2018, the congregations welcomed a single mom and her three children from Rwanda to Winnipeg, right into the frigid winter. The family alternates attending both churches and have been enthusiastic and eager to connect, says Thiessen, providing a source of joy for both congregations.

Each congregation offers a slightly different demographic and programming, which is one reason why the partnership is beneficial, says Lois Braun, chair of the joint committee.

“These inter-congregational partnerships can really help us get the best of both worlds; [we] get to keep that small close-knit church but also have the desired impact that we want on the world,” says Thiessen.

Both Falco and Braun agree that it was great to work together with another church.

In the process of getting to know a family from another continent, members of Sterling and the EMC congregation created and strengthened lasting relationships with each other, too. Following one of the fundraising events, the two churches’ youth and Sunday school ministry teams met to learn from each other and to share what ministry in their churches looks like. Soon after, church members had a brown bag lunch to learn about refugee issues and prepare for the family’s arrival.

Sterling has already hosted a joint service for the two congregations this summer, and St. Vital EMC is hosting another in a few weeks.

“That’s another thing that came out of just being more connected, I’d say, and I don’t think it would’ve happened unless we were working on a project like this refugee sponsorship together,” says Falco.

Both congregations are also involved in a Habitat for Humanity building project with 12 other churches of many denominations and a mosque. This is the second time this interfaith building project has taken place among the St. Vital faith groups.

When it feels like governments and citizens alike are pushing people to emphasize differences and pick sides, uniting with other churches and other faith groups is especially important. “I think that’s been one of the rewarding parts . . . just getting out of our church walls and seeing the power of congregations when we do work together,” says Thiessen.