Former mental health sufferer tells his story to help others 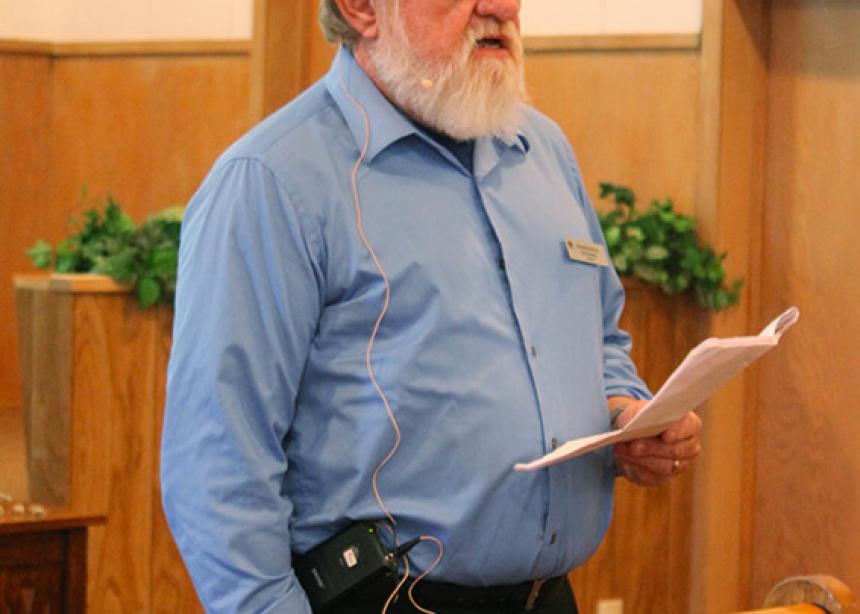 It’s painful for Ken Reddig to tell his story, but he says, “If I can help prevent one loss, then it’s worth it.” Reddig spoke to the adult Sunday school class at Tiefengrund Mennonite Church, north of Laird, Sask., with guests from Laird and Eigenheim Mennonite churches also participating in the April 24 session.

At age 12, Reddig was sexually abused by an adult in his congregation, which led to a lifetime of shame, anger, depression and several suicide attempts. At Eden Mental Health Centre in Winkler, Man., Reddig began the long journey to recovery. The turning point came when he began to take an interest in getting well. “I realized that if anything happened, it had to be because of me,” he says. “I had to make it happen.”

Today, Reddig, who lives in Pinawa, Man., serves on the board of the Canadian Association for Suicide Prevention. He says mental health disorders, substance abuse and prolonged stress can all play a part in a person’s decision to commit suicide. While many suicides happen impulsively in moments of crisis, Reddig says people who are suicidal often reach out for help.

“Be there for someone who is struggling,” he urges. “Support them, but don’t judge. Ask if they have a [suicide] plan. If they have a plan, they are high risk. Get help!” He encourages would-be caregivers to become familiar with the names and contact information of counsellors, mental health workers and physicians, and to have this information at the ready. He would also like to see pastors seek training in suicide prevention. “One in four people will have a mental health issue in their lifetime,” he says.

See more in the Focus on Mental Health series:
Guard your heart and mind
One way your church can stop hiding mental illness
Mental health awareness incorporates art and poetry
Depression resurrection
‘We all need counsellors’
Leaders being equipped to build up the church
‘There is love in this room’
‘I am still holding out hope that I will be free of this one day’
Six steps for better self-care
A living death