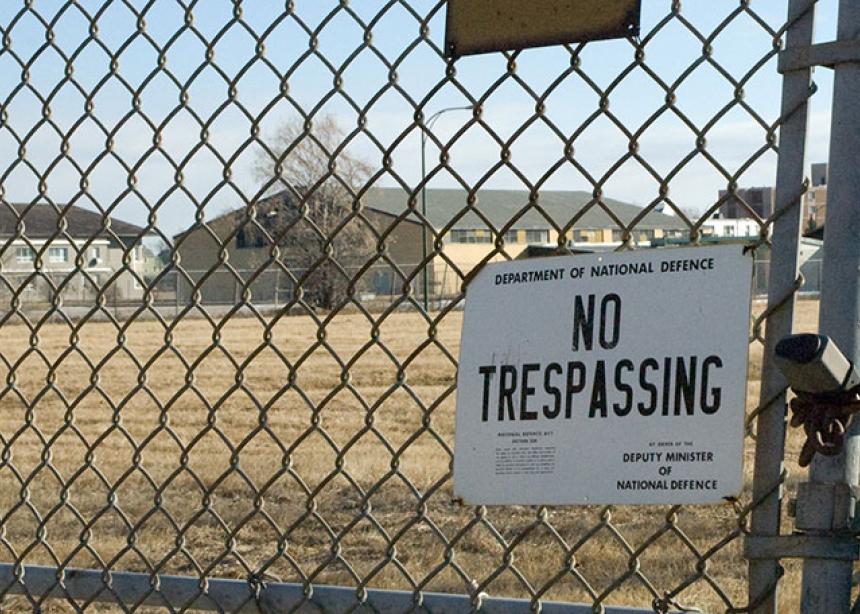 It may not look like much, but the abandoned 90-hectare site of Kapyong Barracks is prime real estate in Winnipeg. It could also be a healing bridge, according to Steve Heinrichs, Mennonite Church Canada’s director of indigenous relations.

The former military base is currently at the centre of ongoing litigation between the federal government and seven first nation communities in Manitoba that want to transform it into an urban reserve.

Heinrichs views the development as a terrific opportunity for first nations and settler peoples to find a way beyond the destructive impact of colonialism. “Land issues are foundational issues for the church to grapple with in their relationships with first nations and indigenous communities, because land is so important to them,” he said.

On March 5, 2015, Mennonite Church Canada and Canadian Mennonite University (CMU) co-hosted a Face2Face discussion about the potential impact of an urban reserve in the well-off Tuxedo neighbourhood of Winnipeg. About 300 people crammed into the Marpeck Commons, located within two kilometres of the barracks, for “On being good neighbours: An urban reserve at Kapyong?”

Panellists included Chief Glenn Hudson of Peguis First Nation; Jamie Wilson, commissioner of the Treaty Relations Commission of Manitoba; and Leah Gazan, faculty/special projects coordi-nator at the University of Winnipeg and president of the Social Planning Council of Winnipeg. They did not shy away from the challenges they face.

“A lot of people haven’t been on a reserve and don’t know more than the negative stories they see on the news,” said Wilson. “We need to share positive stories.”

He pointed to successful urban reserves developed in other provinces. In Saskatoon, Muskeg Lake Cree Nation turned a derelict train yard into a thriving commercial hub for first nation and settler businesses, while Huron-Wendat First Nation created a successful tourism centre just outside Quebec City, and developed a four-star hotel in the city’s downtown.

“We’re not talking about lowered property values, but green space and business,” he said.

Kapyong was abandoned in 2004 when the military base relocated to Canadian Forces Base Shilo in southwestern Manitoba. Three years later, the federal Treasury Board attempted to sell the site to the Canada Lands Company, a Crown corporation, for dispersal. But before that sale could be completed, a group of first nation communities challenged it in court on the basis of treaty agreements with the federal government.

In 1871, the government promised more land to Treaty One signatories than it delivered. In order to meet that deficit, the federal government is legally required to offer any Crown lands labelled as surplus—such as Kapyong Barracks—to Treaty One communities, explained Heinrichs in a conversation following the event.

Gazan told the audience that Winnipeg is in the midst of a housing crisis. Had the urban reserve been allowed to proceed when the land was vacated in 2004, Kapyong could have been used as rental or affordable housing. Now the buildings are dilapidated. In addition, millions of taxpayer dollars have been spent in court. “There is a downside to not developing Kapyong,” she said.

Sharon Braun Stone, whose backyard faces Kapyong, expressed concerns about what an urban reserve might consist of, how it could affect property values and what impact it could have on local lifestyles. A resident for 17 years, she said that more than 500 homeowners back onto the abandoned barracks. “We want to know what’s going on.”

With ongoing litigation, it’s too soon to develop a concrete plan, although the panel pointed to the potential for both residential and economic development, and affirmed the necessity for ongoing conversation with Winnipeggers.

Hudson noted that first nations are seeking ways “to reach out to Tuxedo and get input from surrounding community, including high schools and young people,” just as his great grandfather, Yellow Quill, had sought the opinions of his community before signing the original treaties.

He said that developing an urban reserve at Kapyong provides an opportunity to heal some of the relationships that have been damaged by colonialism.

Kapyong would not be the first urban reserve in Winnipeg, but it would be the largest. Currently, Long Plain First Nation owns land close to Polo Park, a major shopping centre that is home to Yellow Quill College and a convenience store, and Peguis First Nation recently purchased the former Motor Vehicles Branch building on Portage Avenue. Other business or office buildings throughout the city are owned by first nations and are technically considered urban reserves.

Gazan said that she viewed the Face2Face session as the beginning of many discussions addressing the potential for Kapyong. She invited the commu-nity to respond to Maclean’s Magazine’s recent labelling of Winnipeg as the most racist city in Canada. “Maybe Kapyong could make us the most responsive,” she suggested.

“Legal proceeding may determine who gets the land,” said moderator David Balzer as the discussion drew to a close, “but love may determine what kind of neighbours we will be.” 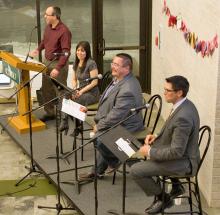