‘I have hope now’ 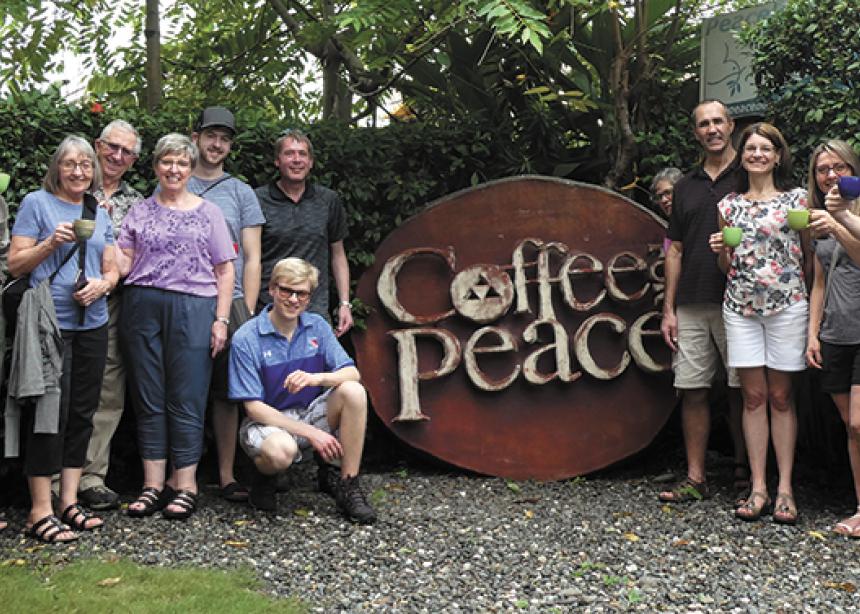 Participants in East Zorra Mennonite Church’s learning trip to the Philippines are pictured with MC Canada Witness workers Dann and Joji Pantoja in front of the Coffee for Peace sign. (Photo courtesy of waves.ca)

Twelve people from East Zorra Mennonite Church, near Tavistock, Ont., knew they would be impacted by their 10-day learning tour to the Philippines in early January. What they didn’t expect was how much their visit would impact the Indigenous people they met.

“I have hope now,” one of the local coffee farmers told the group from East Zorra.

Larry Kropf of East Zorra noted how the tour members repeatedly found themselves on both sides of the equation of “extending and receiving of God’s love.”

The learning tour grew out of a relationship the Ontario church has with Dann and Joji Pantoja, Mennonite Church Canada Witness workers in the Philippines since 2005. For a decade, East Zorra has offered prayer and financial support, and hosted the Pantojas when they came to Canada to share about their ministry.

Caleb Leis, a young adult, was so impressed by the peacebuilding work of the Pantojas that he decided to join the learning tour to see it for himself. He sensed how much their visit meant to the couple and the communities they work with, noting that it was all about learning and building relationships.

The group stayed in Davao City, Mindanao, learning about organizations the Pantojas established, and meeting local people impacted by their work.

Joji leads Coffee For Peace, an inclusive development corporation to help make coffee farming a profitable business, protect the environment and support peacebuilding efforts. The company uses coffee as a tool for reconciliation between corporations, tribal groups and the government.

The East Zorra group was introduced to the fledgling coffee industry, met with the PeaceBuilders board for dialogue and prayer, and visited three Indigenous tribes.

The Obo Manobo Tribe gave the travellers a tour of a coffee farm, and a geo-thermal energy system powered by heat from a volcano. PeaceBuilders negotiated a fee the energy company pays to the tribe in exchange for rights to the land. Members of the tribe invited the East Zorra group to their sacred meeting spot, where they formed one circle and prayed together.

The Bagobo Tagabawa Tribe invited the East Zorra group to take part in a celebration that included dancing, music, food and prayer. Most of the families in this community were living in tents because their homes were damaged by earthquakes. They hope to develop their tribe as quality coffee producers, working towards an economic-ecological balance, food security and sustainability.

The Talaandig Tribe is surrounded by some of richest land in the Philippines, clear cut for corporate farms that continue to encroach on their tribal land. Here, too, PeaceBuilders negotiated payment for the rights to the land, which will help to make the community viable and sustainable.

Martin said that he was impressed by the way the Pantojas “really zero in on relationships,” in a politically unstable country with religious divides and tensions with tribal groups over land rights. They try to hear the voices of all people and find common ground. They are not in the Philippines to convert people or build a church. They are there “to incarnate the love of God,” Martin said.

The impact of the trip is still being felt. Leis was inspired by how Filipinos have rebounded from natural disasters. “We complain about little things,” he said. Now, “I feel like I can get over the small stuff.”

The Pantojas name the life, character, work and teachings of Jesus as the ultimate source of energy that sustains their peacebuilding and development work. This inspires Martin to grow in his faith. “It’s lived. It’s a 24/7 thing for them,” he said. “Seeing someone trying to live out their peace theology in another context helps us to ask, ‘How do we do that in our context?’ ” He added, “If the church isn’t transforming the community around it, why is it there?”

The learning trip has challenged the East Zorra congregation. According to Kropf, the church’s commitment to the Pantojas “has intensified significantly,” and it hopes to eventually buy Coffee for Peace’s coffee when it becomes compliant with export regulations. East Zorra continues to ask how it can extend God’s love locally and globally.

Participants in East Zorra Mennonite Church’s learning trip to the Philippines are pictured with MC Canada Witness workers Dann and Joji Pantoja in front of the Coffee for Peace sign. (Photo courtesy of waves.ca)

The East Zorra Mennonite Church learning tour group gathers at the Davao City welcome sign, in the Mindanao region of the Philippines, where they visited tribal groups and witnessed the peacebuilding efforts of MC Canada Witness workers Dann and Joji Pantoja. (Photo courtesy of waves.ca) 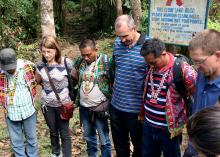 Participants on a learning trip to the Philippines from East Zorra Mennonite Church gather with the Bagobo Tagabawa Tribe as part of celebrations that included dancing, music, prayer and food. The tribe hopes to establish itself as quality coffee producers. (Photo courtesy of waves.ca) 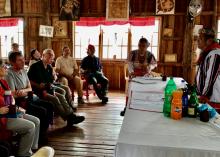 Participants on a learning trip to the Philippines from East Zorra Mennonite Church listen to an elder from the Talaandig Tribe. (Photo courtesy of waves.ca)