Retreat participants discern where God is leading the area church 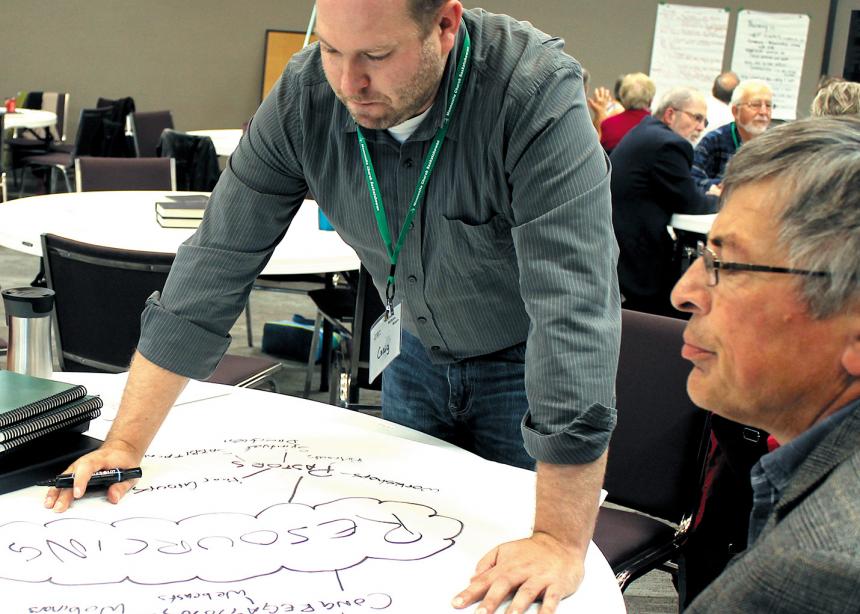 It’s harvest time on the Prairies for farmers on their combines, and this year for members of Mennonite Church Saskatchewan as they met for their second Refresh, Refocus, Renew mini-retreat.

The evening session on Sept. 16 began with a review of the first mini-retreat, held at Mount Royal Mennonite, also in Saskatoon, in April, 2017. Following that event, the reference group appointed by MC Saskatchewan invited congregations to participate in a season of prayer during the summer months, focussing on three questions:

Pries said she would lead September participants in discerning the fruits of their prayers. “This weekend we will be harvesting our listening,” she said. Silently and in conversation, participants explored the question, “How are we hearing God leading MC Saskatchewan?”

Responses varied widely, but as the weekend wore on, several themes emerged. The first was a desire for “deeper spirituality.”

Area church minister Ryan Siemens said, “The April event was spiritually nourishing and very life-giving.” He wondered, “Does that event itself name a calling?”

If God is calling the church to deeper spirituality, then the church’s programs and activities must be spiritually grounded as well.

Claire Ewert Fisher of Mount Royal Mennonite said, “Everything we’ve been doing is really good, but needs to be rooted in our relationship with God. Young people don’t want to hear about God; they want to have an experience with God.”

A second theme that emerged was the desire to “embrace and live out Anabaptist theology.”

Terri Lynn Friesen of Osler Mennonite said, “Sometimes the culture we celebrate gets in the way of the good things we have to offer.”

Celeste Wright agreed. “I think we’re called to shift away from being ethnic Mennonites to being faith-based Mennonites,” she said.

Eric Olfert of Mount Royal Mennonite said he sees God leading MC Saskatchewan “to become Christ-centred and deliberate about how we live out [our faith] in the community.” He added, “I think that’s where our energy lies for the future.”

A third theme threading its way through the discussion was that of “service to the community and to the world.”

Patrick Preheim suggested that service begins within MC Saskatchewan. “I have a sense that we are being called to collaborate between congregations for mutual support and for reaching beyond ourselves.”

Berny Wiens of Herschel Ebenfeld Mennonite said, “I can’t help thinking God would like us to engage on a larger scale with First Nations people.”

Peter Peters of Regina’s Peace Mennonite noted that the church has both history and skill in areas of restorative justice.

As Sept. 16’s session began, Pries used a simple line drawing of a human figure to illustrate how people view themselves. Each individual or congregation has wounds that appear on the edges of who they are, she said, but it is a mistake to think these wounds represent the sum total of one’s identity. Rather, “the heart is where we are already beloved of God, and this is where our identity truly lies,” she said.

Pries then invited the table groups to name three characteristics of MC Saskatchewan. When one group mentioned ethnicity, Pries said she wanted them to think about values rather than character traits. To which Ray Friesen of Emmaus Mennonite in Wymark, Sask., countered, “I think we have value around history, tradition and ethnicity. I don’t think it comes from heart of God, but I think it comes from who we are.” Pries replied, “There may be values we have to retire.”

Other values listed included humility, compassion, community, generosity and hospitality, reconciliation and peacemaking, and being a priesthood of believers.

Finally, participants were asked to take the three themes that emerged during the previous day’s discussion and develop practical ideas for implementing them. A range of suggestions followed.

Char Bueckert of Zoar Mennonite in Langham, Sask., proposed all of the area church’s commissions, committees and boards incorporate the three themes into their agendas, and that the Ministries Commission adopt all three themes as their portfolio.

“Maybe we need to do an evaluation of our programs, and see how they match up with the three proposals,” said Craig Neufeld of Rosthern Mennonite. “If it does [match up] keep it; if it doesn’t, let it go.”

It will be up to the Refresh, Refocus, Renew reference group to develop a plan for implementing the three themes in the coming years. That plan will be unveiled at MC Saskatchewan’s annual delegate sessions in March 2018. (See “Giving the bucket list a ‘deeper’ meaning.”) 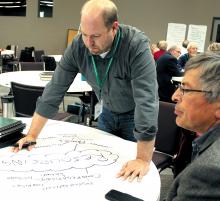 Betty Pries of Credence & Co. tells members of Mennonite Church Saskatchewan that their true identity lies at the heart, where they are already beloved of God. (Photo by Donna Schulz)

Pauline Steinmann adds her group’s sheet of ideas to the sanctuary wall during MC Saskatchewan’s second Refresh, Refocus, Renew mini-retreat. Participants were encouraged to think of practical ways of implementing each of three themes that emerged during the retreat. (Photo by Donna Schulz)