Growing hope, one acre at a time 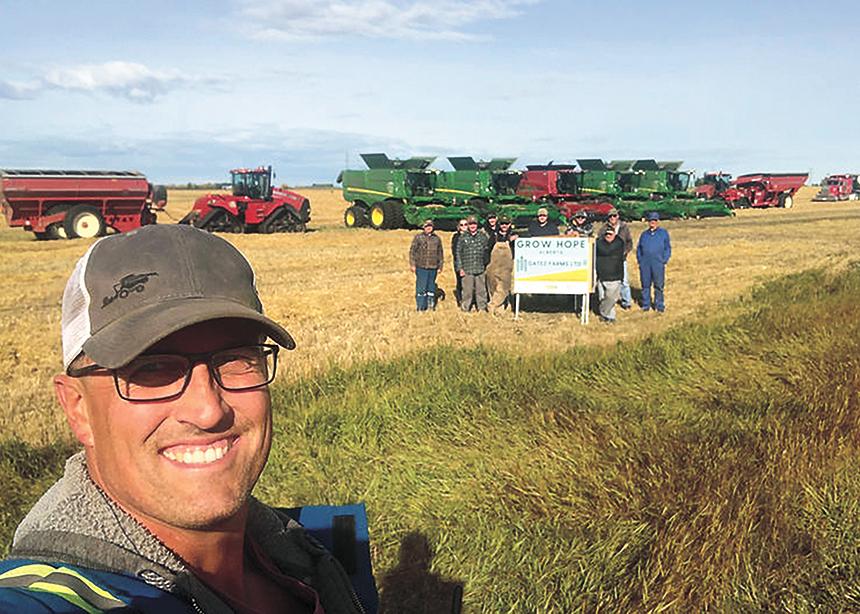 Blaine Gatez is pictured with his team at the Grow Hope harvest. (Selfie by Blaine Gatez)

“We all believe that in our core values it’s important that if there is something that you can do, you do it,” says Emily Lappage of Gatez Farms. She is the eldest daughter of Blaine and Laura Gatez, and has grown up surrounded by farm life and family values.

Gatez Farms is a third-generation family farm situated over two geographically diverse locations in Alberta. The south farm is located along the No. 2 corridor near Calgary, with the northern farm located by the Peace River Valley, north of Spirit River.

For the fourth consecutive year, they are partnering with Grow Hope, after being inspired by their neighbours Richard and Esther Goertzen, who told them about the giving project.

“We had learned about it through neighbours, fellow farmers who had worked with Grow Hope,” says Lappage. “We thought it was really interesting, and with the 4:1 government match [to individual funding], there aren’t very many charities that you can work with that make quite an impact like this one. So it was something that we were really passionate about and were excited to try.”

This year, the Gatez’s team planted 60 acres of canola that will be going to Grow Hope, a non-profit organization run by Mennonite Central Committee (MCC) in partnership with the Canadian Foodgrains Bank.

“We are really excited this year because, for the last three years, we have done 50 acres, and this year the donors were bumped up a bit, so we were able to do 60 acres that are sponsored, which felt really good,” says Lappage. “We are so humbled to be a part of such a wonderful organization that is working with fellow Canadians to help end world hunger.”

Through the project, when someone sponsors an acre of land for $300, the farmers will grow that acre and donate the proceeds to MCC. After harvest, that acre will be worth as much as $500. That money will be matched by the government four to one, which means the $300 spent to sponsor an acre will turn into as much as $2,500. The result is 100 percent of all proceeds go to help end hunger through MCC and the Foodgrains Bank.

Lappage points out that it wasn’t only farmers, or those living in rural areas, taking part, but city dwellers as well: “I think it helps connect the urban to the rural, and it gives people in the urban setting, who don’t have anything to do with the farm, a sense of accomplishment. They are getting to do something on the farm while making a difference at the same time.”

The Gatez family is not new to the idea of giving back to the community, whether it is travelling abroad to help install water filters and electricity to people in need, or working with fundraisers through their church. With the cornerstone principles of their family business being honesty, integrity and respect, joining Grow Hope was a simple decision to make.

“We are three quarters of the way through,” says Lappage. “When we started off the season, we were anticipating drought, then we were blessed with some amazing rains this year and, so far, we are definitely satisfied with how things are going. . . . Definitely a win of a year.”

The gifts through Grow Hope transform lives by supporting MCC’s food projects around the world, from improving nutrition and building resistance against climate change to increasing yields and improving family well-being.

“Its something that we are very proud of. We jump at the gun to tell anyone we know about it,” says Lappage.

Do you have a story idea about Mennonites in Alberta? Sent it to Jessica Evans at ab@canadianmennonite.org. 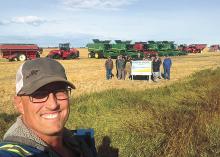 Blaine Gatez is pictured with his team at the Grow Hope harvest. (Selfie by Blaine Gatez)