This ground is holy ground 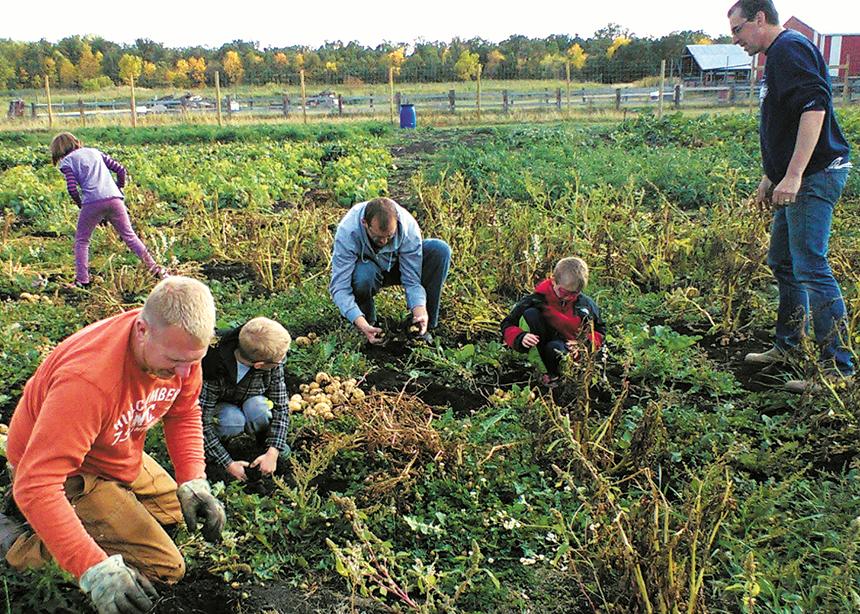 This Ground participants harvest potatoes at Camp Assiniboia in the fall. (Photo by Barrette Plett)

This Ground is a collective that meets to work, worship and eat together in aid of Camp Assiniboia near Cartier, Man.

“This ground, this is the place when we come here we are participating in worship just by looking up at these big trees and recognizing God’s greatness,” says Sandy Plett.

Plett and her husband Barrette initiated This Ground in September 2017, after they volunteered at the camp during the summer and were inspired by the way their children connected with the place. They share leadership with a group of 12 adults who have been committed to the project from the beginning and have really bonded as a community. “This group embraced the vision from the start and have made these gatherings happen,” she says.

This Ground welcomes everyone, from children to adults of all ages. It has attracted as many as 40 people at one gathering, although between 10 and 20 is more typical.

The group gathers on Sunday afternoons for about three hours. For their first year, they met every other Sunday from September to March, even in the snow and frigid temperatures. This year they met five times in the fall and twice in winter, and are planning to meet another five times in the spring.

In autumn, both adults and children get their hands dirty harvesting carrots, potatoes and onions from the camp farm. They move hay bales to insulate the bunny hutch and chicken coop, and rake leaves into mountains.

In winter, the adults bring in wood from the forest, and split and stack it while their children explore the woods and run through the snow. They patch drywall, organize cross-country skis and clean up after events. An electrician participating in This Ground once was even able to solve an electrical issue.

After fixing, chopping and adventuring, the participants share in a potluck meal under the tall trees. Then they worship together by the river, weather permitting.

“I think God works in us when we open ourselves up to God’s creation,” says Sandy. “The space itself is holy, and we can honour the space by going there and working, but also God is present in specifically that place.”

In a circle around a fire they sing their theme song every time they meet. They read the Bible, especially the parables, and talk about what they mean in their lives. It is informal, Spirit-led worship.

“I think our goal has been to really give people a chance, first of all, to share what’s going on in life, so we can pray for each other, and then to reflect on Scripture and what’s the challenge in the Scripture for us in the week or two to come,” she says.

Sandy says she’s talked to people who list church picnics as the closest they’ve come to worshipping outdoors. “I don’t think we get into nature enough as a whole. . . . As a city dweller for many, many years, I didn’t get into nature very often. . . . I didn’t get to just marvel at the space around me.”

“The land is healing,” she says. “When we walk on the land, we are healed and our relationships are healed. We connect with nature, we connect with each other. There are just so many good things about stepping out and connecting at camp and in nature.”

Although the churches of Manitoba own camps Assiniboia and Koinonia, and should be invested in them, many people seldom make it out to the physical places, says Plett. She hopes church and youth groups will start joining them at This Ground, which she says is a great opportunity to spend time at camp and get outside, even if people don’t have time for a full weekend retreat.

“I think it’s important,” she says. “We really need our church families that own the camps to take ownership, and the only way to do that is for people to get there and realize, ‘Oh my goodness, this is amazing.’ We need to keep this going so that people can connect with God here.” 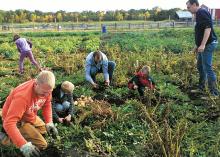 This Ground participants harvest potatoes at Camp Assiniboia in the fall. (Photo by Barrette Plett) 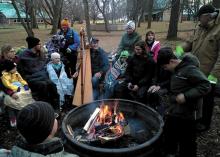 After an afternoon of working outside at Camp Assiniboia and eating a potluck together, This Ground participants gather to sing and worship together. (Photo by Barrette Plett)