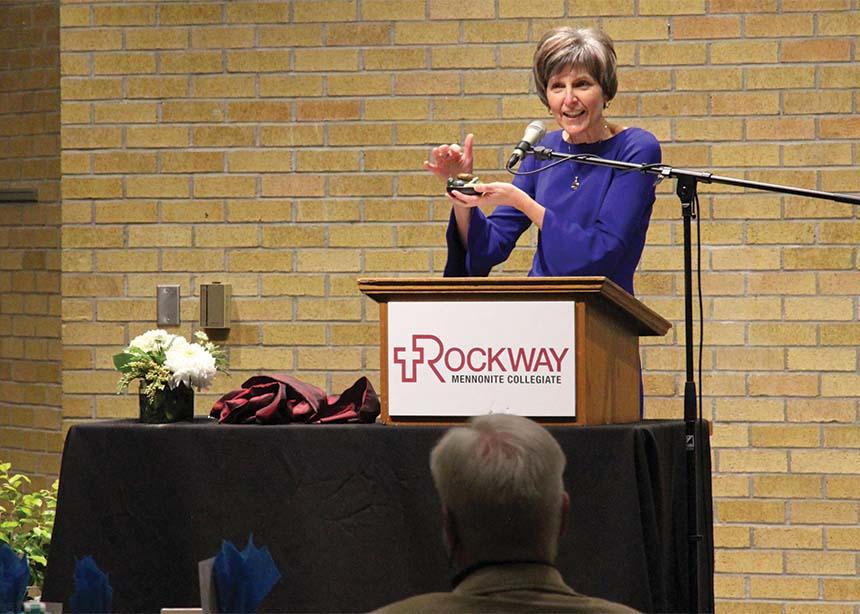 Ann Schultz, in her final address to the Rockway community during her retirement celebrations on Nov. 28, reflected on her 30-year career with deep gratitude. (Photo by Charles Kruger)

With laughter and tears, stories and good music, family, friends, colleagues and students past and present celebrated Ann L. Schultz’s retirement from Rockway Mennonite Collegiate on Nov. 28. With some people in-person at the school, including a safely distanced choir, and hundreds more joining the live stream, it was a time to offer gratitude for what Schultz described as a 30-year career “I couldn’t have imagined.”

Rockway, currently serving students from grades 7 to 12, has been a big part of Schultz’s life. She graduated from there in 1985 and then joined the faculty in 1991 as a junior-high music, French and religious studies teacher. She went on to serve as Rockway’s music department head from 1997 to 2012, before serving as principal from 2013 to 2021.

Board vice-chair Mark Diller Harder facilitated the retirement celebration. Former students Jenny Enns Modolo and Justin Martin, who now teaches at Rockway, gave a light-hearted tour of Schultz’s relationship with Rockway by singing snippets from musicals Schultz had directed over the years at Rockway. Other tributes came from family members, and former and current colleagues.

As a teacher, Schultz was honoured as someone who set high standards for her students and helped them achieve their best. As a department head and later as principal, she was recognized for her highly organized, detail-oriented approach, as well as her commitment to work collaboratively and hear all perspectives, discern thoughtfully and make careful decisions.

Many speakers noted in their tributes that Schultz had an unwavering passion and vision for the school, one she described as “honouring the past, living and celebrating the present, and making bold and courageous changes for the future.”

As a self-described “administrative geek” who finds strategic planning “inspirational,” Schultz said her love for new initiatives meant she thrived on “creating a plan and striving to implement it.” Among the most significant for her were reinvigorating Spiritual Emphasis Week, as well as launching a family breakfast, business courses, restorative justice practices and discerning with the school community, and a gender sexuality alliance to work on creating a safer and more inclusive school for everyone at Rockway.

Always aware of changing times, Schultz emphasizes that Rockway’s vision of integrating sound academics with growth in character and faith remains as important today as it did in 1945, when the school was founded. It has been an “incredible honour to serve,” said Schultz in her closing remarks. “Gratitude abounds for what has been, what is and what is to become.”

Schultz used the metaphor of a musical prelude, with its new and recurring motifs, to describe her 30-year story with Rockway.

As a tangible tribute in honour of Schultz, a legacy Prelude Fund has been set up to “usher in a new era of music at Rockway.” It is meant to be the beginning of what is hoped can be “a larger campaign to support music with additional resources and new classroom and performance space.”

As Schultz’s own prelude at Rockway comes to an end, “the future blooms with possibility,” she said.

Schultz plans to take some time for rest and connecting with loved ones, and then to follow the advice of a friend who said, “Wait to see what finds you.”

For more about Ann Schultz's legacy at Rockway Mennonite Collegiate, read: ‘A compelling example of leadership’

Do you have a story idea about Mennonites in Eastern Canada? Send it to ec@canadianmennonite.org. 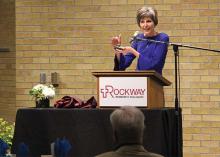 Ann Schultz, in her final address to the Rockway community during her retirement celebrations on Nov. 28, reflected on her 30-year career with deep gratitude. (Photo by Charles Kruger) 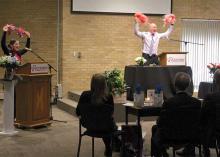