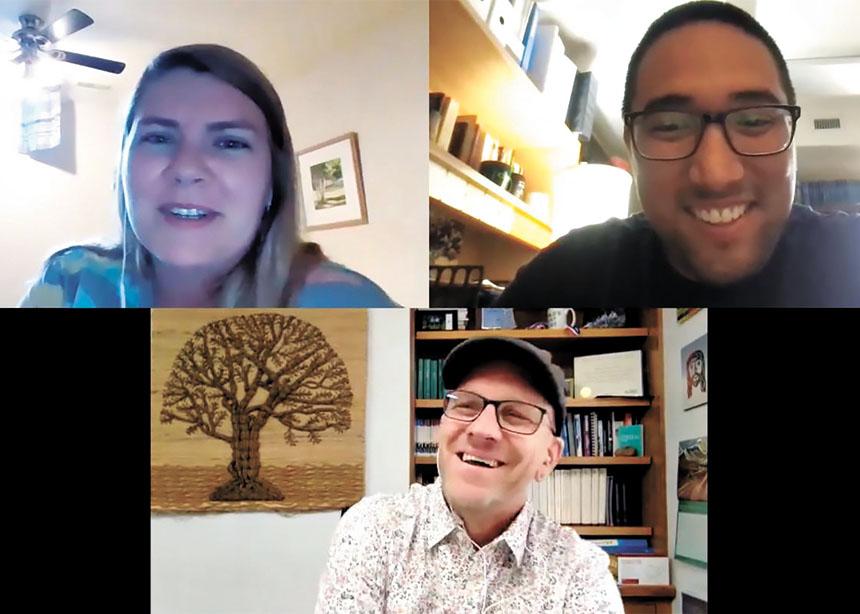 The MennoCast, a new podcast aimed at connecting Mennonites across Canada, launched on June 23.

“It’s been a dream for years. I’m just so happy that it’s out!” says Moses Falco, pastor of Sterling Mennonite Fellowship in Winnipeg, and one of The MennoCast hosts. “It’s like we accomplished the goal! But it’s just the beginning.”

The project originated when the restructuring of Mennonite Church Canada in 2016 shifted the focus of ministry from the nationwide church to local congregations. As opportunities to gather with Mennonites across Canada decreased, Falco started to dream of ways they could stay connected.

If it doesn’t happen at the grassroots level, no one will do it, Falco realized.

There aren’t many Canadian Mennonites in the podcasting world. Some Mennonite organizations produce podcasts and location-specific church programming has popped up here and there, but it’s a niche that remains minimally populated.

Falco saw the opportunity to explore the audio field, and what developed was The MennoCast. He hosts it alongside two other pastors: Carrie Lehn, youth and associate pastor of Ottawa Mennonite Church; and Ryan Dueck, pastor of Lethbridge (Alta.) Mennonite Church. The four episodes released thus far have explored such questions as: “Why are young Christians choosing not to be baptized?” and “Is a hymnal a theological book?” and have featured guests like author Meghan Larissa Good and professor Irma Fast Dueck.

Falco’s interest in media started while studying at Canadian Mennonite University. “Studying communications gave me a love of different media, and how that could be integrated into ministry and the life of the church,” he says. He was simultaneously working in MC Canada’s communications department, at that point a sizeable team, and saw how media could work within the church.

The MennoCast is different from other podcasts because of its intentional goal of creating nationwide connections.

“We are pastors and leaders in the church, and we truly want to see the church flourish,” says Falco of those involved in the project. The hosts hope the podcast gets people talking and sharing ideas across borders, “hearing different perspectives and remembering it’s larger than just us,” he says.

“I think connection matters because Jesus calls us family,” says Lehn. “There’s no need to invent things other folks have already tried out. . . . When other churches have found something that works . . . we can share those ideas rather than being islands who are all trying to figure it out on their own.”

The MennoCast’s partnership with CommonWord demonstrates its desire to be a project for the whole church. As the Mennonite church’s main hub for collecting and curating Anabaptist resources, CommonWord values featuring material produced at the grassroots.

Falco says it was a no-brainer to work together. CommonWord features all of the episodes on its website and hosts giveaways of books and other products for listeners. The MennoCast also has an advisory committee consisting of representatives from each area church.

Having a network scattered across the country and in different communities will help the hosts identify voices that are often not heard in the church.

Their conversation about anti-racism, featured in an upcoming episode, stood out for her. “How important it is for us to understand historically we have been a white church and what kind of impact that has on our current church,” she says. “I'm so grateful for the BIPOC [Black, Indigenous, People of Colour] people who were willing to speak with us on the podcast and share a bit of their experience.”

Although The MennoCast has partners, the hosts operate independently. It’s this combination of partner and individual that they hope will birth “honest conversations that bring life to the church,” says Falco. “We wanted to be separate enough that we could be ourselves. We’re not speaking on behalf of [MC Canada] or any of our churches, we’re just speaking on behalf of ourselves.” Not representing an organization allows the hosts to be more open and honest with each other and their guests, he says.

This pilot season of The MennoCast will run until September, for a total of six episodes. The next season will start in 2022 and will follow a theme. It will run for half the year, releasing episodes every two weeks. The other half of the year they will listen for, “What does the church need to hear at this time?” and they will plan the next season around that.

“I’m really hoping in the next years that this can be a platform to engage with the nationwide church in an ongoing way that connects and enriches us,” like the other programs the church runs, Falco says.

He wonders if the podcast might also give a wider audience insight into who Mennonites are. “Now there will be something out there that offers insight and maybe even draws people to Anabaptism.” 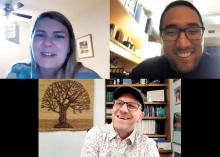