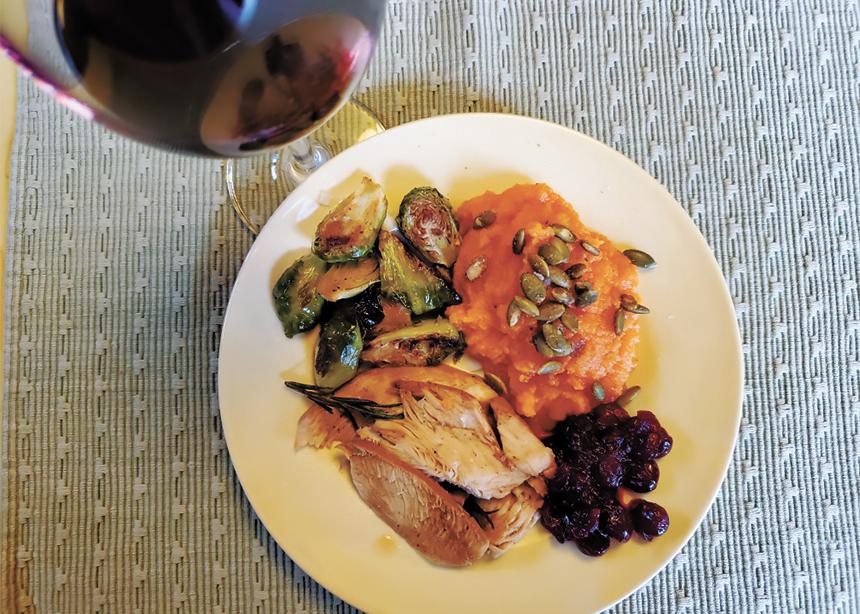 The main course of a meal made by ‘The Gourmet Girls.’ (Photo by Daunine Rachert)

Imagine if you could eat at a five-star restaurant every Saturday night, even during COVID-19. That’s what has been happening in one neighbourhood in Calgary since May 2020.

A recent menu included flavourful prosciutto-wrapped asparagus sprinkled with fresh parmesan and lemon by Charlene Delcourt; juicy garlic-rosemary turkey glazed with Dijon and honey mustards and accompanied by stewed cranberries, prepared by Marlene Nelson; crispy and caramelized brussels sprouts drizzled with balsamic vinegar and honey, made by Jeanette Thiessen; and zesty honey sweet potatoes mashed and peppered with roasted pumpkin seeds, by Daunine Rachert. And no five-star meal would be complete without a mouth-watering dessert—a pear Tarte Tatin baked upside-down covered in phyllo pastry and glazed with caramel sauce and brandy—delivered by Elaine Farner.

According to Jeanette Thiessen of Foothills Mennonite Church in Calgary, the idea began when Rachert invited the women to her backyard for a barbecue to celebrate Delcourt’s birthday on May 9. She told everyone to bring their own buns while she served up the burgers. Everyone was socially distanced. That is when the women started to discuss how they could continue to connect during the pandemic.

The women are all close friends and live in the same area of the city. In fact, everyone but Farner has lived with Rachert at one point in their lives. Rachert jokingly calls her house a “home for wayward girls.”

At first, each woman committed to making the entire meal—an appetizer, a main, two veggies, and a dessert—on a rotating schedule. This could mean up to 20 plastic containers of food. Everyone would meet outside the home of whoever was responsible for the meal, chat and then take their containers home to eat while the whole group visited on Zoom. After seven months, they decided to shift to a potluck style.

That is when Farner was finally convinced to join the group, saying, “I told them they were crazy!” Having each group member make one part of the meal seemed more manageable to her. Now one person chooses and cooks the main dish and everyone else makes something complementary. They eat the appetizer on Zoom and the rest when it suits.

As five single friends needing human connection during COVID-19, they discovered that the idea to commit to sharing a meal every week has not been as difficult as some might think.

Nelson has only missed one week. “This is a huge highlight of my week,” she says. “I love every part, from looking through recipe books, shopping on Saturday, and spending time with friends. . . . It’s also a distraction.”

Rachert says it is important to connect, and the meals give them a purpose and something to look forward to, “like prom,” during this difficult time. She adds that one of the best things is that “we have developed a stronger and stronger bond as friends.”

Delcourt says everyone in the group puts a lot of effort into the meal, making each person feel special. She says the amount of food prepared feeds each person for more than one night, and the leftovers are delicious. “I savoured Marlene’s scalloped potatoes for three nights!” she says.

Whether socially distanced in a backyard, or together on Zoom, sharing their lives in this way has been a true blessing, says Delcourt, adding that even as women who don’t always agree, especially around politics, there is fun in arguing and interrupting each other. They love each other unconditionally as they laugh, share stories, information, book and movie suggestions, and, of course, recipes.

After meeting for almost a year, they decided to name themselves “The Gourmet Girls”—a modern take on The Golden Girls TV show. Plans are in the works to create swag with their group name and photos, starting with distribution bags. Creating a cookbook with their favourite recipes has also been discussed.

Although the women say the weekly get-together has been a beautiful thing, they all lament being unable to hug. They have all had their first vaccination and are looking forward to finally receiving the second shot so they can once again share meals in person, especially the ham with pineapple salsa. Everyone agrees that it is unbelievably delicious. 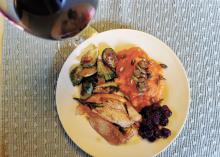 The main course of a meal made by ‘The Gourmet Girls.’ (Photo by Daunine Rachert) 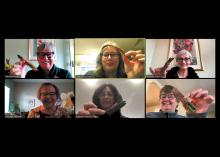 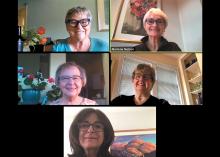 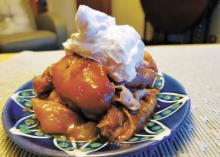