From Golgotha to the Pembina Valley 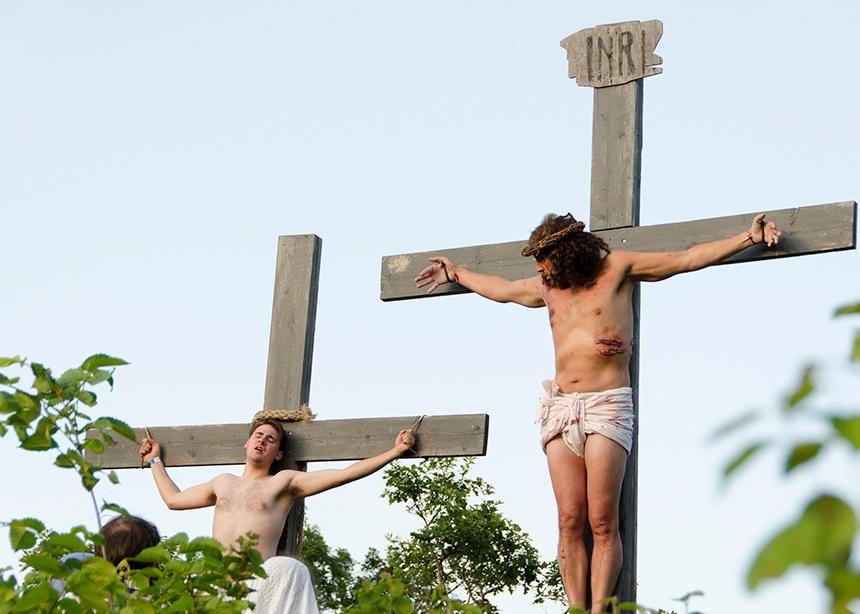 Every summer, more than a hundred volunteers from across Manitoba gather in the rolling hills of the Pembina Valley to bring to life the most important event of the Christian faith: Jesus’ death and resurrection.

Manitoba’s Passion Play celebrated its 20th anniversary this year, welcoming around 2,000 audience members over the span of five shows at the beginning of July. Presented by Oak Valley Productions, the play is held at the stunning Oak Valley Outdoor Theatre in La Riviere, Man., a site that features meditation trails and concession stands, all completely run by volunteers.

Bill Tiessen has stepped out of the family bookkeeping business office and into the sandals of Jesus for the last 12 years, acting the role of Christ in the play. In fact, it’s a full family affair for the Tiessen household, who attend Crystal City Mennonite Church.

Sheila Tiessen, Bill’s wife, has been in charge of stage makeup for more than 15 years, and their children grew up being part of the action on stage. Zachary is now in the role of narrator and Rebecca leads makeup.

“I like to be involved in things that,” says Sheila. “I feel I can have a positive influence in the community and on others and I feel that the play definitely does that.”

But just because they have more than a decade of experience under their belts doesn’t mean they are simply going through the motions. When he first started playing Jesus, Bill says he mostly thought about what he had to say and where he had to go. “As the years have gone on, though, I can think more about how would Jesus have said this, how would he show compassion to children, what would he be thinking as he gazes out across the crowds at the Sermon on the Mount?”

That scene is actually one of Bill’s favourites, because the audience members become actors in the play. “I particularly like that scene because it’s delivered from a rock up on the hillside, looking out over the cast who’s gathered below, and then it just continues on into the crowd that’s watching. . . . They’re all part of the scene,” he says.

The production is unique because the audience sits so close to the actors that they become immersed in the story. Bill says director Belita Sanders is careful to ensure that all 65 cast members are doing different things in every part of the set, and viewers return time and again, saying they see new things every time.

Sanders, who is part of the Roman Catholic church, has directed the play ever since its first year. In 2011, she added a half-hour of material on Jesus’ birth and life before the week of Easter to the Manitoba-sourced script and musical score. Around the same time, the set was fully renovated and gained storage space and a roofed area behind the stage for the cast.

But one thing that hasn’t changed much is the people. More than 80 percent of the actors come back every year, as well as other volunteers, according to Sanders. “The real heart of all of this is the volunteers,” she says.

Individuals and families. Young and old. Catholic, Mennonite, Anglican, United and non-denominational. They all give up their weekends and evenings to share the common message that unites them: the Passion story. “It’s been just a beautiful experience,” Sanders says. “It’s a real privilege to be part of something like this.”

“This is an ecumenical project, where we put aside our little, often small, differences, and we tell a story that we all aspire to follow,” says Bill. “It’s a great experience of teamwork, working together with a variety of people you wouldn’t otherwise come into contact with necessarily.”

The play gives people the opportunity to hear the Passion story with new ears and watch it come to life, strengthening faith for many or maybe even introducing it.

“Having spoken the words [of Jesus] in a theatre setting, it does kind of put a different twist on it,” says Bill. “It draws people in in a different way than just sitting in a pew and hearing a sermon. . . . It becomes a little bit more real.” 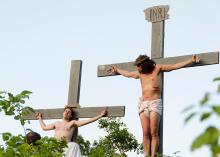 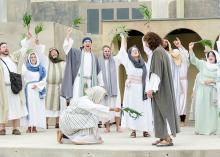 Around 65 people make up the cast of Manitoba’s Passion Play. Pictured, the crowds welcome Jesus, played by Bill Tiessen, front right, as he enters Jerusalem. (Photo courtesy of the Manitoba Passion Play) 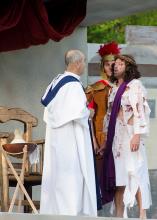 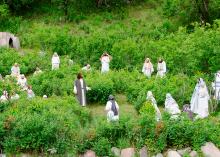 Manitoba’s Passion Play is set in the beautiful Pembina Valley at the Oak Valley Outdoor Theatre. (Photo courtesy of the Manitoba Passion Play)