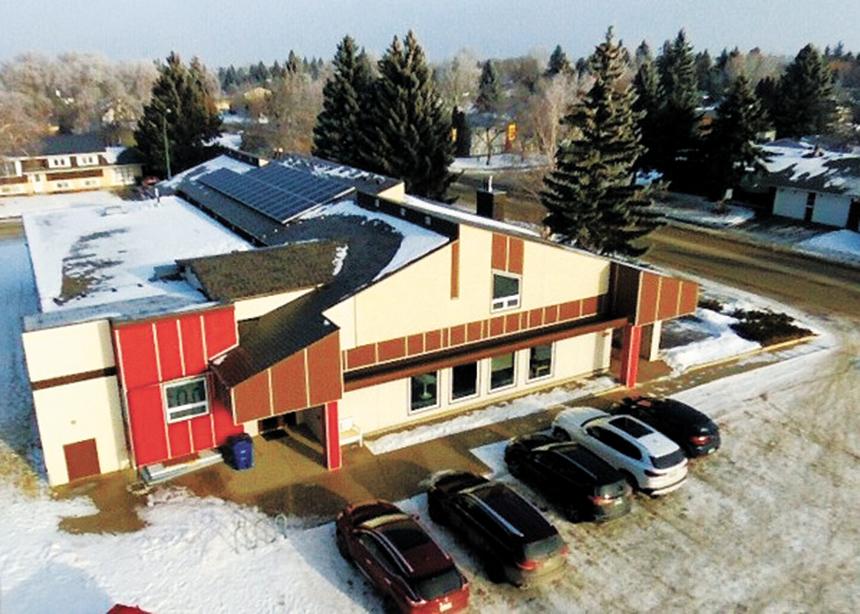 Wayne MacDonald sees installing solar panels on the roof of Wildwood Mennonite as “an expression of what we value as a congregation.” The 20 panels are expected to cover 60 percent of the church’s energy costs. (Drone photo by Les Klassen Hamm)

Two-and-a-half years ago, Wildwood joined the Mennonite Creation Care Network. Brenda MacDonald volunteered to be the congregation’s liaison. She receives regular bulletins from the network, which she shares with the congregation.

She has also introduced various creation care initiatives. The Lug a Mug campaign encouraged members to carry reusable mugs rather than use disposables. Want Not/Waste Not invited members to participate in Buy Nothing Day as an alternative to Black Friday.

After the congregation studied the network’s curriculum, “Every Creature Singing,” several members expressed interest in a voluntary carbon tax. When they wondered what they would do with the funds collected, someone suggested they purchase solar panels for the church building.

It seemed like a good plan, but that’s not exactly how things turned out. “The voluntary carbon tax was the impetus for the project but it did nothing to help it,” says Brenda. With only one donor, the fund raised little money.

The idea of installing solar panels captured members’ imaginations. Rather than wait until the voluntary carbon tax fund accumulated enough money to pay for the panels, the church opted for a more direct approach.

Rick Friesen admits that, although there was enthusiasm for the project, “it was not a church-wide program.” Bruno Baerg and Ben Borne took on the job of raising funds. The needed funds would be above budget.

Church members, says Friesen, “agreed to let it happen, not necessarily [to] pay for it.” He adds, “Probably there are people in our group who don’t care too much about [environmental issues]. They don’t put up a fuss about it, but it’s not their thing.”

But Brenda’s husband Wayne notes that the decision to go ahead with the purchase was unanimous.

Mennonite Creation Care Network has a project fund, says Brenda, but it’s only available to churches in the United States. However, the Saskatchewan government was offering a 20 percent rebate as an incentive to people who purchased solar panels. The application deadline was the end of November 2018. The congregation set its fundraising deadline for the middle of August.

“When we reached $15,000,” says Brenda, “we thought we would have to go for our smaller objective.” But those who were passionate about the project didn’t want to see that happen. “We felt that for a few bucks we would miss out,” says Friesen. So they redoubled their efforts until they reached their $22,000 goal.

The church decided on a 20-panel, 10-kilowatt system, which is estimated to have a 10-year payback. “We looked at what we had been paying for power and based our goal on that,” says Wayne. “We are hoping to get 60 percent of our energy costs covered by the panels.”

Friesen notes that this 60 percent will be averaged out over the year. “Obviously in winter we will get less sunlight,” he says. “But whatever the church doesn’t use [in the summer months] goes back into the power grid, and the church gets some credit for it.”

Cutting energy costs wasn’t the church’s only motivation. “We wanted to do it to save energy,” says Friesen, “but also to be an example.”

Wayne adds, “We wanted it to be an expression of what we value as a congregation.”

Initially, the church had wanted the panels to be installed on the east side of the building so they would be visible from the street. But the company that did the installation recommended they be placed on the west side to collect more sunlight.

When asked what advice they would give to congregations considering going solar, Wayne points out that there are less costly things churches can do to make their buildings more environmentally friendly. He recalls an engineer whom the congregation consulted saying, “Solar panels are the sexy side of [environmental sustainability]. The hard work is done by LED lights, and by making sure you have good weather stripping.” He adds, “Small changes can still make a difference.”

Friesen points out that Wildwood made a lot of these small changes when it renovated in 2015. “We didn’t change the footprint of the building but we changed the interior,” he says. “We installed large windows in the south wall, and in places where we do the most we [now] use LED lighting. We did some insulating and changed a lot of windows.”

Brenda acknowledges that it’s easy to feel overwhelmed in the face of global warming and environmental degradation. But, she says, “Maybe doing these small things helps us to feel less hopeless.” 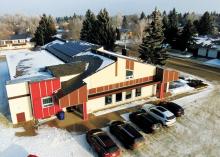 Wayne MacDonald sees installing solar panels on the roof of Wildwood Mennonite as “an expression of what we value as a congregation.” The 20 panels are expected to cover 60 percent of the church’s energy costs. (Drone photo by Les Klassen Hamm)

Congratulations to Wildwood Mennonite Church in Saskatoon for being the first to put solar panels on their roof. They have inspired all of us to continue our efforts in caring for creation.

I would like to point out a few missing, newsworthy details. First, your larger membership may not know that the majority of Saskatchewan’s electricity comes from coal. Consequently, using solar panels has a bigger impact on climate change than a solar panel project in Manitoba, where electricity comes from hydro. Saskatchewan has continued their solar rebate but it can end at any time.

Second, in the “Reflections of Creation” feature (https://canadianmennonite.org/creation-care), the statement was made that Christian communities “can support one another to move beyond the paralysis of inaction.” I would like to see Mennonite Church Canada and our provincial organizations take on a facilitating role helping churches raise funds for solar panels. Had I known that Wildwood Mennonite Church was considering going solar, I would have sent money to support their project, and I think others would have as well. Why would I have done this? Churches are excellent places to offset carbon emissions. For many, including our family, flying is our greatest carbon sin: four single return trips equals the amount of carbon generated from our household electrical use for the entire year.

There are many organizations that offer carbon offsets, but none are more enticing than a church offset project: Saskatchewan offers a 20 percent solar rebate; in Alberta 35 percent; the donor gets a 40 percent* donation tax receipt; the church gets reduced electrical costs year after year; this means more money for worthy service projects such as Mennonite Central Committee; creation rejoices! The donation credit may even entice non-church members to contribute. Ideally we would all stop flying, but since that is unlikely to happen, offsetting carbon emissions for a holiday plane trip is the very least we can do.

Will our leaders step up to the plate and provide a mechanism for directing carbon credits or, at the very least, facilitate communication on solar projects? Think of it as a barn-raising.