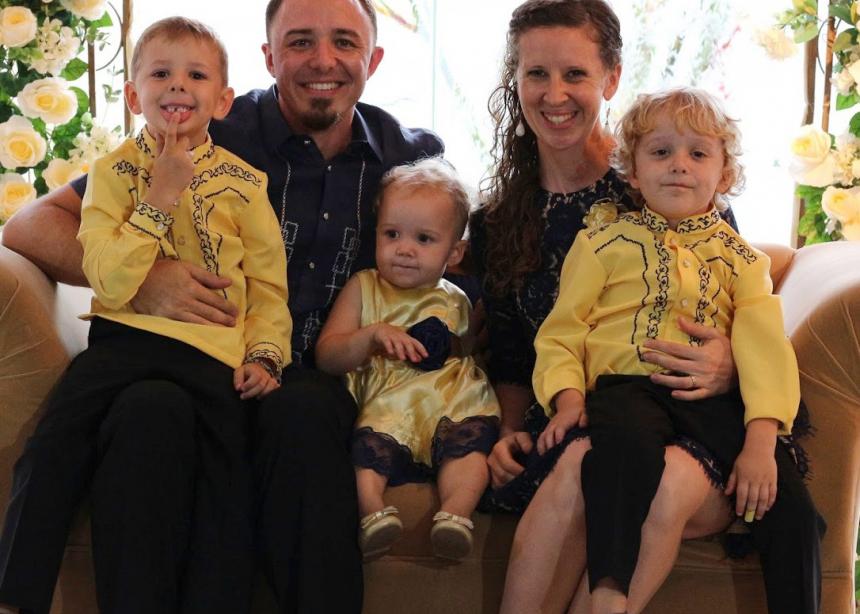 To put names and faces to these partnerships, Canadian Mennonite’s correspondents across the country have profiled Witness workers and the churches that support them. Following are stories from B.C. and Alberta. You can read stories from Saskatchewan, Manitoba and Eastern Canada here.

Partnerships among congregations have been the basis of much of our shared work and identity as Mennonites in Canada. The formation of church “conferences,” now called area or national churches, was often based on the principle and reality that “together, we can do what we cannot do alone.”

Since its inception, Mennonite Church Canada has promoted congregational partnerships as part of a larger vision to be ambassadors of God’s transformation and reconciliation from across the street to around the world. Despite anticipated structural changes in the national church, congregational partnerships will be even more essential for global mission in the future.

Covenants also name the gifts that congregations bring to the relationship. These often include prayer and financial commitments; a desire to be challenged; and the invitation to receive global reflections on the biblical understandings of God, the church and ministry. Currently, MC Canada facilitates partnerships with more than 60 congregations, including some that are not part of the national church.

A 2017 survey of partner congregations by the International Witness Working Group reveals that congregations place the highest value on meeting and hearing Witness workers, on being able to financially support workers, and on being able to regularly pray for their mission partners. In light of financial realities prompting the current restructuring process, it is interesting to note that the same survey respondents also highly valued the opportunity to financially support programs as well as overall international ministry.

Partnership is not just a programmatic term for Canadian congregations. It describes the reality of global mission today. The beginning point of all mission efforts is the activity of our reconciling and sending God. Receiving and sharing that vision in koinonia with other parts of God’s global kingdom is an inspiring, ever-evolving and worthwhile effort. A proverb on the wall of the Johannesburg airport reminds us: “If you want to go quickly, go alone. If you want to go far, go together.”

‘Love and support’ from their home congregation
Darnell and Christina Barkman

Since 2011, Darnell and Christina Barkman of Abbotsford, B.C., have been Mennonite Church Canada Witness workers in the Philippines, where they give pastoral leadership to Peace Church Philippines in Metro Manila and serve as mentors for the youth programs of Mennonite churches in Luzon. They are the parents of three young children, Cody, Makai and Teyah, and are members of Emmanuel Mennonite Church in Abbotsford.

“Our partnership with Emmanuel began before we left Abbotsford for the Philippines,” says Christina. “As our home church, Emmanuel had always been incredibly supportive and nurturing when we were discerning our ministry path with MC Canada Witness and then getting ready to move overseas with [at the time] two young children. It was only natural that a formal partnership would be created with them.”

April Yamasaki, senior pastor at Emmanuel, says, “As a congregation, we have a strong sense of partnership with Darnell and Christina, Cody, Makai and Teyah. We stay connected by email, blog, Facebook, through the Missionary Support Team that Skypes with them regularly, and whenever they’re able to be in Canada we look forward to getting together in person.”

The Barkmans feel that having the strong support of a home congregation is vital to their overseas ministry. A care team of Emmanuel members is committed to supporting the family through prayer, and during their monthly Skype meetings Darnell and Christina are able to share their joys and struggles, and in return receive perspective, wisdom and encouragement from the team. The Barkmans also send monthly updates for the church newsletter as a reminder of the congregation’s active partnership with them.

When the Barkmans come back to Canada for several weeks every summer, Emmanuel invites them to preach at a Sunday morning worship service followed by a noon potluck fellowship meal. The family returned to B.C. the first week of June, and their mission and sharing Sunday at Emmanuel was held on June 25, 2017.

In return, the Barkmans appreciate hearing how their home church is connecting in the community as they meet with many friends over meals or coffee, or on summer evening walks.

“Our partnership with Emmanuel has helped us connect with many individuals and families who have also served overseas as missionaries,” says Christina. “These relationships have helped us learn how to navigate the cross-cultural difficulties and the stress of being away from familiarity. We’ve learned from several wise life-long missionaries that we need to be patient and wait on God, despite times where we feel we want to see fast results.”

The Barkmans have only one year left in their term serving in the Philippines, and are looking forward to moving back to Abbotsford and transitioning to weekly activities at Emmanuel. “We have appreciated the partnership with Emmanuel over the last five years and are very thankful for the prayers, the relationships and the financial support,” says Christina. “We always feel the love and support from our home congregation.”

Trinity Mennonite Church has a 20-year history of partnering with Mennonite Church Canada Witness workers, and the key to its success has been strong personal relationships between the workers and the church’s pastors and congregants.

It started naturally around 1997, when the congregation began partnering with then pastors Hugo and Doreen Neufeld’s son Gerald and his wife Rie, as they worked with the Mennonite church in Japan.

When they returned to Canada, Trinity had another opportunity for a natural connection. Korean families began joining the church, and the new pastor, Erwin Wiens, and his wife Marion had just returned from ministry with MC Canada in Korea. A serv-ice and learning trip to Korea helped to cement relationships. The current pastor, Will Loewen, and his wife Ana have also served with MC Canada Witness in Korea.

Tom and Christine Poovong began attending Trinity approximately 10 years ago, and with the congregation encouraging them, they returned to Thailand as long-term Witness workers in 2013. It was clear to them and the congregation that there was a sense of God calling them.

“We did feel it will be very hard to be long-term Witness workers, but at the same time we believed we were called to be part of Mennonite Church Canada missionary workers,” says Tom in an email. “We have decided to follow footprints of God to become disciples making disciples to the ends of the earth.”

Early on in the Poovongs’ assignment, Hugo and Doreen were chosen to coordi-nate the partnership. “This was important in terms of trying to keep interest going once the initial excitement was over,” Doreen explains. The Neufelds encourage the exchange of letters and pictures, and make sure a bulletin board with current news about the partnership is on display.

“One recommendation we would make to anyone entering into a partnership is to encourage appointing a coordinator to take responsibility for keeping the vision alive,” she says. “Personal connections are also very important, such as group visits to the country, as well as having the mission workers visit as often as possible.”

Tom values the personal connection with Trinity. “Trinity is our home church and we know many people there,” he says. “The good thing about our partnership is that we believed in our pastor and deacons and many of our brothers and sisters there for the prayer support and courage.”

Trinity also partners with congregants, Paul and Vila Phomsouvanh, to support short-term mission work. This spring, the Phomsouvanhs spent seven weeks in Thailand and Laos, connecting with the Poovongs, and providing discipleship and leadership training for a number of isolated churches.

“In Laos, we don’t have a seminary or Bible college. This is basic training for the leaders and lay people,” Paul says, adding, “All the church leaders [in Laos] report that they don’t have materials to keep training [new disciples].” The Phomsouvanhs also work to translate the needed materials into the Lao language.

A trip to Thailand by Trinity members in February 2016 helped highlight the importance of short-term ministry and connected the Phomsouvanhs’ work to MC Canada. Paul feels the connection to MC Canada is very helpful. While their mission trips in the past had been partly supported by a Baptist fellowship in Vancouver, partnership with MC Canada has provided international connections that allow them to work where they may not have been previously allowed.

Asked for advice on mission partnerships, Paul says, “I would like to encourage churches in Canada . . . to look at training our young people to go out and see the needs of the people, what kind of material they need and how they live. They need to see the situation for themselves. That’s how God opened my eyes.”

You can read mission partnership stories from Saskatchewan, Manitoba and Eastern Canada here.

1. Have you ever participated in a partnership with another congregation in another country or culture? What is the purpose of this type of partnership? What are the joys and challenges of this kind of partnering? What formal and informal connections are required to keep the bonds of partnership strong?

2. How important is regular visiting between congregations in partnership? Are there alternate ways of connecting if the congregations are far apart and don’t speak the same language? How is this model different from having a central mission board support church plants in far-flung places? Is this a sustainable model for mission work in the long run?
3. Tom and Christine Poovong are Witness workers in Thailand, a part of the world where they lived before emigrating to Canada. What are the strengths and challenges of sending Witness workers from Canada to their country of origin? How important is it to have members of the supporting congregation visit mission workers overseas? 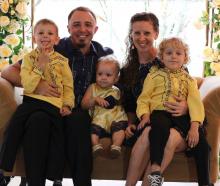 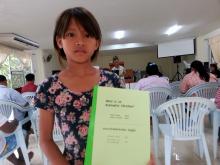 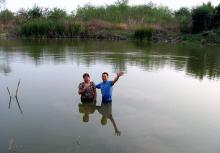 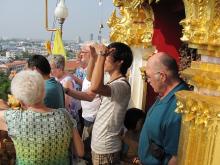