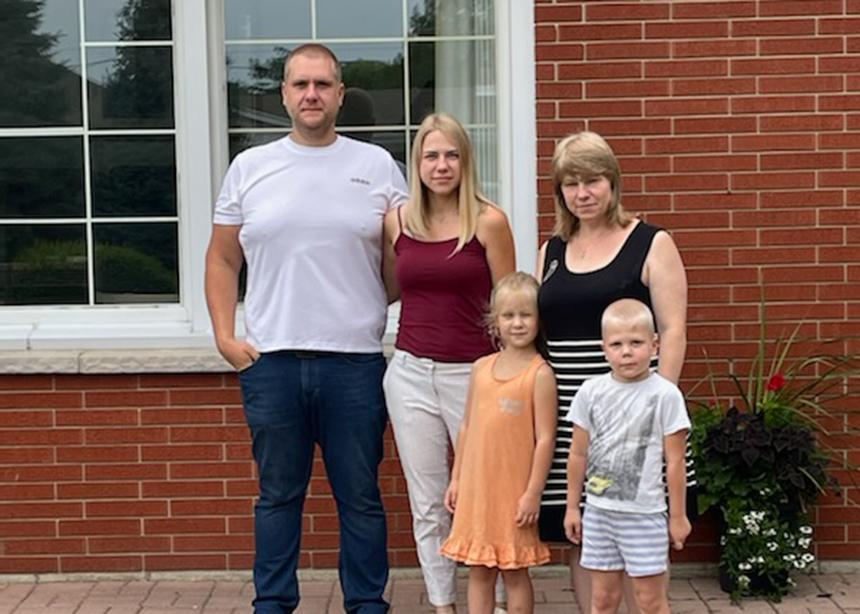 It is amazing what can happen when a few friends get together.

Roger and Laura Tiessen, members of Faith Mennonite Church in Leamington, were touched by events in Ukraine that were unfolding in February and March of this year. They voiced their concerns with friends Brad and Charlotte Lane. Before long, Brad and Roger, their golfing buddies and their wives were all on board to sponsor a displaced family from Ukraine to come to Canada.

Soon they called upon the assistance of Faith Mennonite, since an established charity is most credible when receiving donations. The church was on board right away and, together with others from the community, this small group’s number expanded to around 40.

This diverse group, ranging from regular church attenders to those who do not follow a specific religion, all had similar sentiments about their own fortunate situation and the senseless misfortune of those fleeing for their lives in Ukraine. They also felt a desire to help by giving a family a hand up so they can help themselves.

Good intentions and a willing spirit are one thing, but how does one go about actually bringing a family from a war-torn nation here?

Ukrainians who are coming to Canada are not technically arriving as refugees. They are arriving under the Canada-Ukraine Authorization for Emergency Travel program. To become eligible, Ukrainians needed to fill out an application and complete biometrics. Once approved, many families set up a profile on a special Canadian Facebook page in hopes that someone would offer assistance.

Initial arrangements the group had made to bring an identified family to the Leamington area fell through, so they were soon searching for another family to assist.

Charlotte Lane quarterbacked the search process using the Canada—Host Ukrainians Facebook page to identify and vet potential families for a fit with what the group from Leamington was offering. Criteria included a small family that wanted to live in a town, not a big city, and had a mechanic looking for work.

Before long Charlotte linked with the Kulachko family. Father Artem, mother Nadiia, and their 13-year-old son, Oleg, began communicating with Charlotte. With a virtual handshake over a video conference, they committed themselves to each other. The Kulachkos continued a long and arduous journey north, eventually arriving in Warsaw, Poland, where they boarded a 10-hour flight to Toronto.

The group had decided quite early on that they wanted to not just bring a family here, but to set them up for success after they arrived. This diverse group of people included a member who had a home that could be rented out, and whose business also needed a mechanic.

The house was prepared for the family, and donations and gifts-in-kind began flowing in. Before long, they had secured beds, bedding, bicycles, a lawn mower, every kind of kitchen utensil, sofas, chairs, a kitchen table and chairs, a car, and even a new faucet for the kitchen sink. The home was renovated, while Aeroplan points were donated toward the family’s flight to Canada. The outpouring of generosity was a “God thing,” according to members of the hosting group.

After flying for 10 hours from Warsaw, the Kulachko family met Brad and Charlotte at Pearson International Airport and climbed into their car for the four-hour drive to Leamington. They arrived with three suitcases and their dog Lizzie. The timeline from their first discussions on video chat to when the Kulachkos arrived was about two-and-a-half months.

Within 12 days the group had a meet-and-greet at the Tiessens’ home, and Artem was already working.

The group has since sponsored a second family: Father Daniil Dolozin; mother Olga Nesterenko; their daughter Violetta, 6; and son Timofey, 4. Olga’s mother Nataliia Nesterenko also accompanied them. The Dolozin family, like the Kulachkos, were set up in Leamington to succeed, with a home to rent and suitable employment in place.

Members of the sponsoring group have been kept busy with the daily requirements of settling newcomer families in Canada. Arranging for doctors, dentists, health cards (the newcomers are covered under OHIP), driver’s licences, getting children enrolled in school, and making arrangements for English classes, are just some of the activities keeping them busy.

Both Ukrainian families asked their sponsors why they were doing this for them. Their response was, “The team wants to help you get established in Canada.” 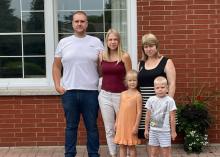 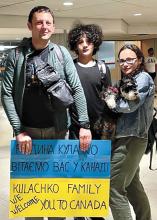 Pictured from left to right: Artem, Oleg and Nadiia Kulachko at Pearson International Airport in Toronto after their arrival from Poland. (Photo by Charlotte Lane)